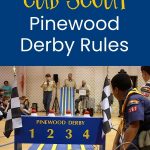 Looking for the “official” BSA Pinewood Derby rules for Cub Scouts? Find out all about the rules and inspections with printable examples.

Did you know that there are no national Boy Scouts of America official Pinewood Derby rules?

Even though each car-building kit comes with a “rules and instructions” printed insert, they are suggested rules. Your pack's race committee will decide on the official rules for the race.

However, if your pack winners can move on to compete at either a district or council Derby, you'll probably want to use the rules for that event.

That's what we did in my pack. I would have hated for a Cub Scout who won our pack Pinewood Derby to get to our district Derby only to be disqualified because his or her car construction didn't conform to the district Derby rules.

Our pack purchased an Official Grand Prix Pinewood Derby Kit for each Cub Scout. These were handed out usually at our January pack meeting along with a copy of our district's rules.

We made sure that our new Cub Scouts understood the importance of following the district rules at our pack's Derby.

So, if there aren't any official BSA Pinewood Derby rules, what are the recommended rules?

First, there are certain specifications for the car.

You can use this handy Revell Pinewood Derby Wheel Adjustment Tool to perform 7 different checks of your cars.

Next, there are thing that are permitted or prohibited on a Pinewood Derby car.

Cars must be inspected.

And that's it for the recommended Pinewood Derby rules.

But there are lots of other considerations. According to the Boys' Life website, here are some of the questions that you might want to answer in your rules.

You can get all the tools and supplies your Cub Scout needs to build their Pinewood Derby car in my Amazon store!

But these aren't the only considerations. Your rules should address things such as:

Check out these 17 ideas for Pinewood Derby-themed treats to serve at your event!

Here are some printable Pinewood Derby rules examples that I've collected. You can use these as a resource when you create your own.

Before your derby starts, you'll need to have check in and inspections. Some packs will hold these the night before the derby and will give the Scouts an opportunity to race their cars before the official event. This is a great idea if you can leave the cars at your facility overnight.

You may want to have an inspection checklist for your pack. Here are three great examples.

Our Cub Scouts lined up with their cars. Our inspection table was usually staffed by 3 people.

Here's the process we followed:

These fun (and free!) Pinewood Derby printable activities can help the time go by faster for the kids who are waiting.

We called our adjustment area/table the Pinewood Derby Pit Stop. There we had graphite, weights or some pennies, scales, superglue, duct tape, wood files, basic hand tools, and a drill for parent use only so that the Cubs could make adjustments.

One of our grandfathers would be responsible for the table so that he could help the Scouts (and their parents) make any necessary adjustments. Because it would get busy, we also had a couple of parents there to help him.

Often, a Scout who was crossing over would have graphite and weights that they didn't need anymore, so we would ask their parents to donate their extras to the pack so that we wouldn't have to purchase them.

I would love to add your pack's rules to the examples in this post. Feel free to send me a copy via email at [email protected]

P.S. Check out all my Pinewood Derby resources!