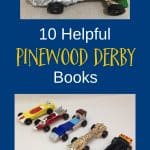 The most exciting Cub Scout event is the Pinewood Derby. But your Cub Scouts may need some help with their cars. Check out these 10 Pinewood Derby books.

The Pinewood Derby is one of those unforgettable experiences in the life of every Cub Scout, and this list of 10 helpful Pinewood Derby books will help your family to make the most of it.

From step-by-step plans for a number of amazing car designs to tips for creating your own unique Pinewood Derby car, there are some great books on this list!

The Pinewood Derby might seem pretty simple on the surface. It may seem like just a little race between little wooden cars racing along a track. But parents and Cub Scouts who participate find out that there is a whole lot more to this yearly racing event.

The Pinewood Derby offers Cub Scouts and parents the opportunity to learn many things. Physics, woodworking, design, good sportsmanship, and more – the Pinewood Derby is all about learning while enjoying a whole lot of fun!

I've compiled a list of books to help you and your Cub Scout truly enjoy the experience of the Pinewood Derby.

Planning and designing a Pinewood Derby car is something that your family will remember fondly for years to come. But more importantly, it is an amazing and rewarding Cub Scout family experience!

Building the Fastest Pinewood Derby Car: Speed Secrets for Crossing the Finish Line First! by Troy Thorne – Does your Cub Scout want great tips for making his Pinewood Derby car as fast as possible? This kid-friendly book has a lot to offer.

The author covers everything from planning and shaping your design for maximum speed to building your car for maximum performance. Written by a scoutmaster and Pinewood Derby authority, you'll find all kinds of advice here that you didn't even realize you needed.

Pinewood Derby Speed Secrets: Design and Build the Ultimate Car – 7 Ready-to-Cut Patterns; Illustrated, Easy-to-Follow Instructions by David Meade – Creating an awesome Pinewood Derby car requires a variety of skills. You learn design planning, woodworking, a basic understanding of physics – and even more. But if you find it too daunting to plan out your own car design, this great book may be just what you need!

It offers up 7 super-fast and ready-to-cut patterns. And you'll also learn some great tips to help you learn to design your own. Full of pictures and clear diagrams and illustrations, it is an amazing resource for Cub Scouts and parents.

The Ultimate Pinewood Derby Experience: Making the Most of Four Wheels, Four Nails, a Block of Wood, and Your Kid by Dr. Barlow L. Packer – One of the best things about participating in a Pinewood Derby with your Cub Scout is how bonding it can be. This is especially important in our modern world filled with electronic distractions. This book is a great reminder that the Pinewood Derby isn't just about winning a race – it is about winning in your relationship with your child!

Pinewood Derby Designs & Patterns: The Ultimate Guide to Creating the Coolest Car – 34 Patterns, Plus Expert Tips & Techniques to Build a Jaw-Dropping, Prize-Winning Car by Troy Thorne – Are you looking for a great collection of plans and designs to help you and your Cub Scout build a Pinewood Derby car to be proud of? This book was written by a Cub Scout parent who also happens to be an expert woodworker.

You'll find 34 of the best patterns you've ever seen, along with clear instructions on how to build each one. In fact, with so much fun to offer, don't be surprised if your Cub Scout is inspired to build a whole fleet of Pinewood Derby cars!

Pinewood Derby Secrets: With Bonus Section Raingutter Regatta Tips by George Tompkins Brown Jr. For parents and Cub Scouts who are new to the Pinewood Derby, this book is a great way to learn all about it. It offers step by step instructions as well as some great web links to help you learn even more.

You and your child can learn almost anything you need to know to make this popular yearly event as rewarding as possible. And if that isn't enough, you and your Scout might even build the winning car!

You can get all the tools and supplies your Cub Scout needs to build their Pinewood Derby car in my Amazon store!

This Cub Scout Pinewood Derby Guidebook is amazing for a number of reasons. Published in 1992, it gives you a glimpse of how things were “back in the day” as compared to now. Not only that, you will get the chance to learn about Space Derby Rockets and the Sailboat Regatta. It's a guidebook and a trip back in time, all in one excellent book!

There are 19 incredible patterns here to get you going, p all kinds of tips for building a car that looks good and is made to win. Best of all, you and your Cub Scout will learn together while having a lot of fun along the way!

8. Winning Secrets From a Pinewood Pro

In this excellent book – revised in 2010 – he shares over 40 secrets. In addition, there are product recommendations to help you and your Cub Scout build the Pinewood Derby car of your dreams!

9. Ways to Win the Pinewood Derby

Pinewood Derby Ways to Win by Charles Brinker – The author of this book wants to make the Pinewood Derby feel as accessible as possible. He shares building techniques that can be accomplished with simple hand tools most people have. And he has great tips for planning and designing a car you and your Scout will be proud of for many years to come. This book was written from personal experience – and it shows.

Pinewood Derby Workbook and Logbook by Troy Thorne – This great book allows your Cub Scout to keep track of their design and painting ideas and test run results. There's also a place to record the weights of each of the parts and a page to post pictures. It's an awesome way to record your Pinewood Derby memories–especially for that first Derby.

I hope that this great list of Pinewood Derby b helps your Scouting family make the most of your Pinewood Derby experiences. Win or lose – this event is a lot of fun! I'd love to hear about some of your favorite Pinewood Derby memories in the comments below!

I love all the cool Pinewood Derby printables on Etsy!

[…] addition to the Pinewood Derby books like these that are available, here are a few websites you might want to […]

[…] if there aren't any official BSA Pinewood Derby rules, what are the recommended […]