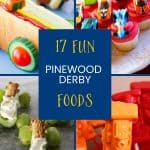 Use these fun Pinewood Derby food ideas to turn your race into a party! Your Cub Scouts and siblings will love the festive refreshments and treats.

Serving food at your Derby gives those kiddos something to do when their car isn't on the track. And keeping little bellies full is always a good thing!

You can find so many fun race car-themed food ideas when you search on Pinterest. And, they're perfect for the Pinewood Derby.

Race Car Sandwiches – About a Mom made these incredible race car sandwiches. I love the pickle hat that's on the driver's head (which is a cherry tomato).

These don't look too hard to make. But, if you have a big pack, it'll take a lot of cucumbers for all of the kids to have a driver. You could use this sandwich as a centerpiece for your Pinewood Derby food.

Sandwich Fixings Cut Out With Car Cookie Cutter – This idea comes to us from Julie Zaruba's old website. She simply used a car-shaped cookie cutter to cut out car-shaped cheese, lunch meat, and bread. Kids could assemble their own car sandwiches.

The Cub Scouts could even cut out their own lunch meat and cheese during the Derby. I would probably cut the bread myself rather than letting the kids do it. I think it would be too easy for the bread to tear or getting totally mashed down if the Cub Scouts do it.

Hot Dog Race Cars – These race car hot dogs are from Eating Richly. She uses a little piece of cucumber inside a hollowed-out cherry tomato for the head. The cucumber is the face, and the tomato is a helmet. But you could just use the tomato without the cucumber for a fun Pinewood Derby food item.

Traffic Cone Bugles – The Hostess with the Mostest used Bugles as traffic cones. That's a great way to add something crunchy to go with the sandwiches.

Peanut Butter or Cream Cheese Filled Celery – Recently, I put together some healthy Pinewood Derby treats. Fill celery sticks with either peanut butter or cream cheese and add grapes as wheels. Add a Teddy Graham as a driver to make this a cute and yummy Pinewood Derby food.

Stop L Fruit – This article on Nickelodeon Parents shows you how to create stop lights out of fruit.

Fruit Race Cars – Check out these race cars made out of fruit. Start with an apple or orange slice, add grapes for wheels, and a checkered flag toothpick.

Molded Chocolate Race Cars – Renee's Soirees used Candy Melts in various colors to make race car lollypops. Pour the melted Candy Melts into a race car mold like this one. You could also use chocolate rather than the Melts.

Candy Bar Race Cars – Paula from the Frosted Fingers blog made these sweet race cars out of candy bars. They were a big hit for her pack. She said she was able to make 100 in about an hour, so click over and find out how she did it.

Chocolate Donut Spare Tires – The Workman Family's son had a truck-themed birthday party. Their chocolate coated donuts were spare tires. Very clever! And nice to have a Pinewood Derby food that doesn't require any work on your side.

Rice Krispies Treats – I used store-bought rice treats to construct cars and red lights, but you can also make your own.

Cupcakes With Hot Wheels on Top – Through Clouded Glass used Hot Wheels to top cupcakes for a race car birthday party. The kids could take home a new Hot Wheels car as a favor.

Cupcakes With Cars Made From Mini Candy Bars – Check out how The Joys of Boys topped their Pinewood Derby cupcakes with race cars made out of candy.

Here's another version of cupcakes topped with candy bar race cars. I'm not sure who originally made these. If you do, let me know so that I can give them credit.

So, what do you think? Which of these race car ideas will you serve as your Pinewood Derby food?

[…] packs make their Derby a fun family event by having activities, music, snacks, and even a photo […]

[…] wouldn't be a party without delicious Pinewood Derby food. Here are a few ideas for […]

[…] can serve Pinewood Derby-themed food like these rice krispies treats, these race cars made out of snack cakes, or even healthy snacks […]

[…] Over the years, our Pinewood Derby evolved from simply showing up and racing your car to a fun family event with activit… […]