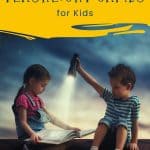 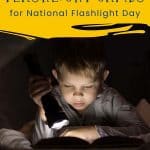 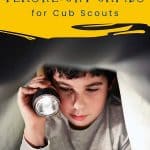 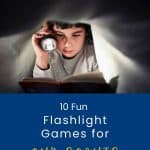 Flashlight games are the perfect way for kids to enjoy the outdoors when the sun goes down.

One great benefit of Cub Scouting is that it gets our kids outside. When the time changes and it get dark earlier, playing outside can be a bit of a challenge. But with these 10 flashlight games for kids (and a little supervision), our Scouts can still enjoy the outdoors.

Every 15 seconds or 30 seconds (you can decide on the appropriate amount of time for your group), the Lightning Bug flashes their flashlight on and off once. When the flashlight goes off, they hurry to find another hiding place.

By flashing the light, the Lightning Bug is giving the other players a chance to alight on the his or her hiding spot. They'll need to use their intuition to decide where the Bug will hide next.

The person who finds the Lighting Bug gets to be the next Lightning Bug.

Flashlight games wouldn't be complete without shadow puppets. Shadow puppets is a great game for the imagination! Whether you are indoors or outdoors, this game will provide hours of entertainment.

Give your kids flashlights, and teach them about shadow puppets. Have your child lay the flashlight down on a table so the light is shining on a wall.

If you're on a campout, project the light on the side of a tent.

Then decide what the “play” will be about.

Next, it’s showtime! Let them begin placing their hands in different positions to make different animals or people on the wall.

You can also cut out different animals, people, or objects, and glue them on craft sticks. Let their imagination run wild!

Who doesn’t love a good game of shadow charades?  Think of it as charades meets shadow puppets.

You can play charades with teams, or you can play as individuals. For this game, we'll assume that one person is acting, and everyone else gets to guess.

An adult or a den chief can be in charge of topics. They can write out the charade topics on slips of paper and put them in a bowl. Each participant then selects a topic to act out.

Alternatively, the person can just whisper the topic to the participant.

Here are some camping-themed charade ideas that you might want to use.

The first participant stands near a wall (or the side of a tent), and the adult or den chief shines a flashlight toward their hands.

The Cub Scout then tries to make shadow puppets on the wall to reflect what they were given to act out. The rest of the den or pack tries to guess what they're acting out.

The next one of our flashlight games is Flashlight Limbo. Grab a flashlight, and use it like a limbo pole!

Start by pointing a flashlight at a wall or side of a tent. Hold it so that the beam is fairly high up.

Next, have the Scouts try to pass underneath the beam just like you would a limbo pole.

5. Scavenger Hunt in the Dark

A scavenger hunt is a great addition to our list of flashlight games. Depending on the ages of the participants, decide how hard or easy your scavenger hunt will be.

Give each player a flashlight, or split up into teams with the team leader being the only one with a flashlight.

Before dark, hide items around the house or yard, just like a regular scavenger hunt.

Or head outside to identify things that the kids should find–rocks, sticks, dead leaves, insects, etc.

Just remember the Outdoor Code. You might want to have the kids just check off that they saw one of the items rather than collecting it to bring back to you.

The children can start the hunt using their flashlights when it's dark outside!

Let’s see those goofy dance skills for this flashlight game! Turn the music on, and have the Scouts break out their silliest moves to the music.

Have an adult slowly move the flashlight beam around the room. When it hits one of the Scouts, they freeze in place. If they move, they’re out.

Who doesn’t want to be a spy? Print these Morse Code charts, and pass them out to your “spies”. Then tell them to watch for a code to crack.

Have an adult send a Morse Code message with a flashlight to the group. Whoever decrypts the message first wins!

You can make this even more fun by having a prize. Hide the prize in advance. The message can be its location.

This game is fun for all ages, but especially for the younger kids. Turn your flashlight on and move it around. Have the Scouts try to jump into the circle of light as it moves around the room.

This game is the most fun in a big, open field with some trees and things to hide behind. Instead of using regular flashlights, have your Scouts wear headlamps.

Divide the space into two sides, and divide the players into two teams.

Each team will hide a flag on their side. The players from the other side must cross over, find, and retrieve the flag. Then they must run it to safety on their side without being tagged by the opposing players.

If they are tagged they must go to “jail.” The other players on their team can get them out of jail by tagging them and running back to the safety of their side without being tagged by the opposing players.

The idea of storytelling with a flashlight is similar to stories around the campfire. Start by having everyone sit in a circle.

A favorite is placing the flashlight under the chin to light up the storyteller’s face. Flashlights can also be used to highlight objects of interest during the course of the story.

National Flashlight Day is on December 21st. It's the same day as the Winter Solstice which is the shortest day, but longest night of the year.

Will your Cub Scouts enjoy playing these flashlight games on National Flashlight Day?

[…] Play flashlight tag or another fun flashlight game.  Use these finger lights for added […]