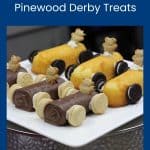 These fun and easy Pinewood Derby treats for Cub Scouts use pre-made snacks to create cars. Make them ahead of time or have the Scouts put them together.

Sometimes, our Pinewood Derby can run long especially if you have a large pack.

Getting all the cars weighed in often takes longer than we think. How long your actual race takes will depend on several factors.

Because you might be there a while, it's good to have a little snack for the kiddos. Waiting on their turn to race can make kids hungry, and we know hungry kids are cranky kids! ? This is especially true for our younger siblings who aren't quite old enough to be a Cub Scout.

In addition to having Pinewood Derby treats, think about including some sort of craft activity to help fill the waiting time. Here are some ideas:

The Pinewood Derby treats I'm going to show you today are super easy. These race car-designed snacks are simple to assemble, but they're sure to be a hit.

My favorite part? You don't have to cook anything!

I'm sure some of you won't like these snacks because they aren't very healthy, so check out these healthy Pinewood Derby treats.

The Little Debbie Swiss Cake Rolls or Twinkies will serve as the body of our race car. The Mini-Oreos are the wheels, and the Teddy Grahams are the drivers. The frosting will be the “glue” that holds everything together.

How to Assemble Pinewood Derby Treats

Start by unwrapping your Swiss cake rolls or Twinkies. The Swiss rolls have two to a package. They're on a piece of coated heavy paper. If you aren't careful, the frosting will stick to the paper. You'll wind up with a roll that's missing half of its frosting.

Little Debbie Swiss Cake Rolls are one of my favorites, and I've had that happen before. Of course, I licked it off the paper–can't let good chocolate go to waste! ?

Set out 4 Mini-Oreos. Put a dab of frosting on one side of each cookie, then affix to your car body two on each side, one near the front and one near the back.

I started out trying to use a small spatula to put the frosting on the cookies. That didn't work very well because the cookies are so small. I finally scooped up some frosting with my finger and dabbed it onto the cookie.

I know, I know. I shouldn't have stuck my finger in the frosting! But is that as gross as armpit fudge?

In hindsight, using a bag as a piping bag would have been a much better alternative! Simply spoon the frosting into one bottom corner of the bag, mashing it down so that it totally fills the corner. Push as much air out as you can, and seal the bag.

Making fudge in a bag is another fun thing to do with a ziploc bag!

Cut off that corner of the bag. You don't need to cut much. In fact, it's better to start by cutting a very small piece off. You can always cut off more.
If you use the piping bag, you can lay out all of the wheels you need and pipe a dab of frosting onto each one then attach them to body.

Note: On my first attempt, I tried putting the frosting onto the car body and then pressing a cookie into it. That didn't work well because I put too much frosting on, and it looked a little messy.

When you put the frosting on the wheels first and then affix them to the car, some frosting will smush out around the tire, but it doesn't look nearly as messy as putting the frosting onto the body first.

After the wheels are attached, you're ready to add your driver! At first, I thought I could just push the Teddy Graham into the cake.

The Swiss cake rolls are soft enough that you can just push the cookie down into the cake.

You can get your whole family to help with assembling these Pinewood Derby treats. Designate someone to add the frosting, someone to attach the wheels, and someone to put the driver on.

Though I do have to say, the more people in the assembly process, the more likely that wheels, drivers, and even the body of the car might come up missing!

If your pack isn't afraid of a little mess, you could let the kids assemble their own Pinewood Derby treats during the race. Set out all of the ingredients, and get some of the teen sisters and brothers to help the younger kids.

If your pack lets the Scouts assemble their own, send me a picture! I would love to see that.

[…] shared some fun Pinewood Derby treats made from Little Debbie cakes and some made from Rice Krispies treats, but they weren't exactly healthy. I promised to share some […]

[…] can serve Pinewood Derby-themed food like these rice krispies treats, these race cars made out of snack cakes, or even healthy snacks made with fruit or […]