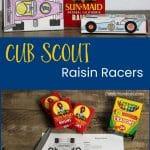 The Cub Scout Pinewood Derby is an exciting event! But sometimes, it can be a bit long for the younger siblings. Have the kids make Raisin Racers, a fun craft combined with a snack.

My pack's Pinewood Derby schedule starts with weigh-ins about an hour before the actual race start time. This gave the Scouts time to make any last minute adjustments if their car was too heavy or too light. That schedule works out really well–with one exception.

Some of the parents wind up walking around with the little folks to keep them from running up to the Pinewood Derby track. It's tough for them to manage the kids and watch for their Cub Scout's turn to race.

To fix this problem, we include some activities that will keep the kiddos busy while they're waiting.

One of my favorite activities is making Raisin Racers. I first saw the Raisin Racer on the Akela's Council website. (If you don't know about them, check them out! They're a great resource!)

Although it's fixed now, originally their link to the Raisin Racer printable didn't work. It was such a great activity that I decided to have one similar to it created. I used someone on Fiverr to design it for me. I think he did a great job!

If you ever need some kind of printable created, check out Fiverr. I've used them for several projects for the blog–including the little guys in my logo.

What I like about this activity is that it combines a craft and a snack. It doesn't take too long to do, and it's inexpensive.

I purchased a 6 box pack of raisins for $2 which makes them about 33 cents a box. Depending on how many kids are in your pack, you could let the kiddos make 2 or 3 racers.

Supplies You Need for Raisin Racers

Note: Make sure you get the right sized box so that the racer will fit. The boxes I used are 1 oz., and they usually come 6 to a pack. Sun Maid does have some mini boxes that are 1/2 oz. They come in a bag. Make sure you don't get these because they'll be too small.

Before your Derby, you'll want to print the page. Simply enter your email in the box below to download it.

There are two cars on each page, so remember that when you're estimating how many to print. Purchase your raisins, and gather your supplies.

We usually put our tables for crafts away from the track and viewing area, but where you can still see the track.

You will need someone to monitor the craft because scissors are involved. ? Scouts BSA members (especially those who used to be in your pack) are usually willing to come back and help.

Another source is older siblings. For a few years, we had a couple of teen-aged sisters of Cub Scouts who were willing to help out with activities like this.

The instructions are on the raisin racers printable, but it really is self-explanatory. Here's what they do:

Some kids may want to eat their raisins before they make their racer!

There's a couple of ways to tape the car so that you can open the box without tearing off the racer. Using double stick tape will make it easy to open one end.

Another option is to fold a piece of tape back on itself and put it under the flap on one end.

After the kids make their raisin racers, you'll probably see them “racing” their cars, so watch out so you won't get run over! ?

Looking for another fun activity that's also a yummy treat? Make fudge in a bag at your Pinewood Derby!

Another activity that was a hit was temporary tattoos like these. The kids loved them!

Before your event, you'll need to print the printable. Download it by entering your email address in the box that's in the post. There are two copies of the car on each page, so take that into account when you're printing.

Leave a comment and tell me what fun activities you've had at your Pinewood Derby.

P.S. Check out all of my Pinewood Derby ideas, suggestions, and tips!

[…] Play some cool tunes from this Pinewood Derby music playlist. Have the Scouts (and their younger siblings) make Raisin Racers. […]

[…] You can make these Pinewood Derby refreshments ahead of time. Or you could make this a combo activity and snack like the raisin racers. […]

[…] fun thing to do is build Raisin Racers. Who would have thought that coloring a picture of a car and taping it around a box of raisins […]