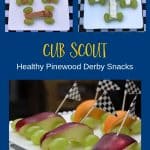 Add some excitement to the big race with these 4 healthy Pinewood Derby snacks. Cub Scouts and parents both will love them!

The Pinewood Derby is such a fun event for our Cub Scouts. It gives parents and kids an opportunity to work together to build something fun.

And it's a great learning opportunity. I shared three lessons that the Pinewood Derby taught us–creativity, challenge, and collaboration.

But this event can last a long time–especially if you have a big pack. It's a great idea to have some snacks available so that we don't have “hangry” Cub Scouts or younger siblings.

I shared some fun Pinewood Derby treats made from Little Debbie cakes and some made from Rice Krispies treats, but they weren't exactly healthy. I promised to share some that are a bit more healthy.

Several of our Cub Scout adventures have requirements about eating healthy snacks.

Tiger  Required Adventure Games Tigers Play 2. Talk with your den or family about why good nutrition helps you to be strong and active. Bring a nutritious snack to a den meeting. Share why you picked it and what makes it a good snack choice.

Tiger Required Adventure Tiger Bites 6. With your parent, guardian, or other caring adult, plan and make a good snack choice or other nutritious food to share with your den.

Bear Elective Adventure Bear Picnic Basket 1. Create your own Bear cookbook using at least five recipes you might cook or prepare either on your own or with some adult help. Include at least one recipe each for breakfast, lunch, dinner, and a nutritious snack.

Bear Elective Adventure Bear Picnic Basket 3. Select and prepare two nutritious snacks for yourself, your family, or your den.

Having healthy Pinewood Derby snacks is a great way to show our Cub Scouts that healthy can be fun. Read on to discover four treats that your Cub Scouts will love.

Pinewood Derby Snacks Made with Apples or Oranges and Grapes

Making race cars out of apples or oranges with grape wheels is super easy. All you have to do is cut the fruit and attach the wheels using toothpicks.

Start by gathering your ingredients and supplies. Here's what you'll need.

You'll probably want to wash your fruit before you begin cutting it.

My apples and oranges were big, so I cut them into 8 pieces each. If your fruit is small, you may decide to cut it into sixths rather than eighths.

I start by cutting the fruit in half. I then lay the flat side down onto the cutting board and cut it in half, making fourths.

Next, I cut the core out of each fourth. Finally, I cut each fourth in half making eighths.

After you've finished cutting your fruit, it's time to add the wheels.

Lay a piece of the fruit skin side down. Push two toothpicks through the apple or orange as shown in this picture. Then add a grape to each end of both toothpicks.

I tried doing this two different ways, and I'm not sure which is best. Experiment with both ways, and decide which you like.

I added a grape on the other side then used my kitchen shears to cut the excess off so that the end of the toothpick was flush with the grape.

That was a little awkward for me, so I tried another method.

I added the grape on one side and pushed the toothpick through just like the first time. But before I added the second grape, I cut the excess toothpick off first.

The second method was a little faster for me because I didn't have to make sure the scissors were as close to the grape as possible.

Your apples will start to turn brown, but there are two things you can do to slow down that process. You can toss them in a little lemon juice or you sprinkle Ball Fruit-Fresh on them. The Fruit-Fresh is probably the best option because the apples won't taste like lemon juice.

After I added the wheels to the cars, I added a black and white checkerboard toothpick flag. Make sure you angle them so that it looks like it's flying behind the car as it races down the road. ?

Note: Please be cautious about Cub Scouts with allergies if you make these. If one of your Scouts has a dairy allergy, you can purchase dairy-free cream cheese like the kind we used in our dairy-free armpit fudge.

Start by washing and cutting the celery. I didn't measure the celery–I just estimated how long I thought it would need to be and started cutting.

This worked, but go slowly. If you push at an angle rather than straight down, the toothpick won't go straight through–it'll be at an angle. This will cause the wheel to be too low or too high, and the racers won't sit level.

After you've inserted the toothpicks, use a small spreader or spoon to add the cream cheese or peanut butter.

The celery pieces from the stalks closest to the middle have very narrow centers. The Teddy Grahams with their legs apart are too wide to push down into the cream cheese or peanut butter, so you'll want to use the ones with their legs together.

Final Note: Because these Pinewood Derby snacks have toothpicks, you'll want to monitor the small children when they're eating them.

What do you think about these healthy Pinewood Derby snacks?

P.S. Check out all these Pinewood Derby supplies!

[…] Pinewood Derby snacks made with apples, oranges, and […]

[…] We can serve Pinewood Derby-themed food like these rice krispies treats, these race cars made out of snack cakes, or even healthy snacks made with fruit or celery! […]

[…] Butter or Cream Cheese Filled Celery – Recently, I put together some healthy Pinewood Derby treats. Fill celery sticks with either peanut butter or cream cheese and add grapes as wheels. Add a Teddy […]