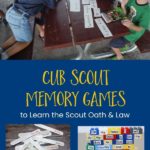 The Scout Oath and Scout Law are woven into the very fabric of the Boy Scouts of America. But what's the best way for our new Scouts (or returning Scouts) to learn them? By playing these Scout memory games!

Why the Oath & Law are Important

When my sons were born, I knew that they would have their own dreams and aspirations. They would forge their own path and become the people they were meant to be. So I didn't have expectations of them having a specific career or specific hobbies.

But the one expectation I did have was that they would be good people who would treat others well. My high standards included wanting them to be good neighbors and good citizens, to have compassion for others, and to be accepting of the beliefs of others and welcoming to people who are different than them.

I wanted them to be responsible for their actions and to think through the benefits and consequences of decisions they make.

If you would like to have a free Scout Oath and Law printable, enter your email in the box below!

It's easy to have these lofty parenting goals, but with days full of homework and sports practices, and laundry, it's hard to figure out exactly how to teach these values to our kids.

I know that the best thing we can do is show by example. But we may want to find a more explicit way of helping their character development.

When I hear the Scout Oath and the Scout Law, those words embody the kind of people I want my sons to be. So, exposing them to these values through our participation in the Scouting program is a great way to ensure that they hear more about them. Regardless of whether or not they become Eagle Scouts, just being involved can help them.

What are the Cub Scout Requirements for the Scout Oath and Scout Law?

There are several Cub Scout ranks and adventures that have requirements related to the Scout Oath and Scout Law. I've listed them below for your convenience.

Lion – The Lion rank requirements don't include any reference to the Scout Oath or Law.

Bobcat – For the Bobcat rank, Scouts need to “learn and say” both the Scout Oath and the Scout Law “with help if needed.”

They don't have to memorize them. In fact, they could simply repeat after their den leader.

Tiger Elective Adventure Good Knights 1. With your den or with your parent, guardian, or other caring adult, say the Scout Law. Explain to your den one of the 12 points of the Law and why you think a knight would have the same behavior.

Wolf Elective Adventure Cubs Who Care 6. Use American Sign Language to communicate either a simple sentence or at least four points of the Scout Law.

Arrow of Light Required Adventure Duty to God in Action 5. Discuss with your family how the Scout Oath and Scout Law relate to your beliefs about duty to God.

Arrow of Light Required Adventure Scouting Adventure 1. Prepare yourself to become a Boy Scout by completing at least A-C below: A. Repeat from memory the Scout Oath, Scout Law, Scout motto, and Scout slogan. In your own words, explain their meanings to your den leader, parent, or guardian.

Webelos and Arrow of Light Elective Adventure Art Explosion – I. Create a comic strip with original characters. Include at least four panels to tell a story centered on one of the points of the Scout Law. Characters can be hand-drawn or computer-generated.

Webelos and Arrow of Light Elective Adventure Castaway D. Make a list of four qualities you think a leader should have in an emergency and why they are important to have. Pick two of them, and act them out for your den. Describe how each relates to a point of the Scout Law. Describe how working on this adventure gave you a better understanding of the Boy Scout motto.

Webelos and Arrow of Light Elective Adventure Maestro G. Write a song with words and music that expresses your feelings about an issue, a person, something you are learning, a point of the Scout Law, etc. Perform it at your den or pack meeting, alone or with a group.

Webelos and Arrow of Light Elective Adventure Moviemaking – 2. Create either an animated or live action movie about yourself. Your movie should depict how you live by the Scout Oath and Scout Law.

Are Cub Scouts Too Young To Learn These?

Some people have been concerned that the Cub Scouts may be too young to learn the Oath and the Law. In fact, back in 2015 when we first heard that Cub Scouts would be transitioning from the Cub Scout Promise and the Law of the Pack, I had some concerns.

But at a training session at the Philmont Training Center, Bob Scott who was BSA's Cub Scout experience manager at the time, compared learning the Oath and the Law to learning the Pledge of Allegiance.

We don't hesitate to teach kindergarteners (and even pre-schoolers) the Pledge. They don't understand it, but they learn it. Understanding comes as they mature. It's the same for younger Scouts who are learning the Scout Oath and Law.

According to Bryan on Scouting, “Cub Scouts in early ranks should not be expected to memorize the Scout Law but are developmentally ready to begin exposure to the words of the Law and are ready to begin building understanding of the concepts with help.”

And when our kids are in fifth grade and ready to cross over to Scouts BSA, they'll already know the words that are truly the heart of Scouting.

Why Games are Important to Learning

No one–especially not Cub Scout-aged kids–wants to have to learn something with methods that are boring! Instead, try using a Scout Oath or Scout Law game to stimulate their learning.

There are so many benefits to playing games when trying to learn something new. In a blog post she wrote for Education World, Rebekah Stathakis lists five reasons to include games in learning environments. I want to focus on two of these.

If Scout leaders were to tell our Scouts that we are going to repeat the Scout Oath over and over, I doubt they would ever want to come back to a den meeting. But if we say we're going to play the balloon bust game or the Lego game, they'll definitely want to come back.

Games give our kids the opportunity to practice learning the Oath and Law over and over. Having different types of Scout memory games keeps them engaged. They'll be able to memorize the Oath and the points of the Law in the correct order.

“While playing games, students develop a variety of connections with the content and can form positive memories of learning.”

We know that people learn differently. By having different types of games, we can meet the needs of different learning styles.

For example, the Bobcat relay race helps those young people who need to move around as they're learning. The index cards games help kids who are more visual learners.

Below you'll find a list of helpful Scout Oath and Scout Law games and tools. They are great interactive activities to do at Cub Scout den or pack meetings or even day camp. Scouts of all ages will enjoy them.

Try a few Scout memory games at your next event! 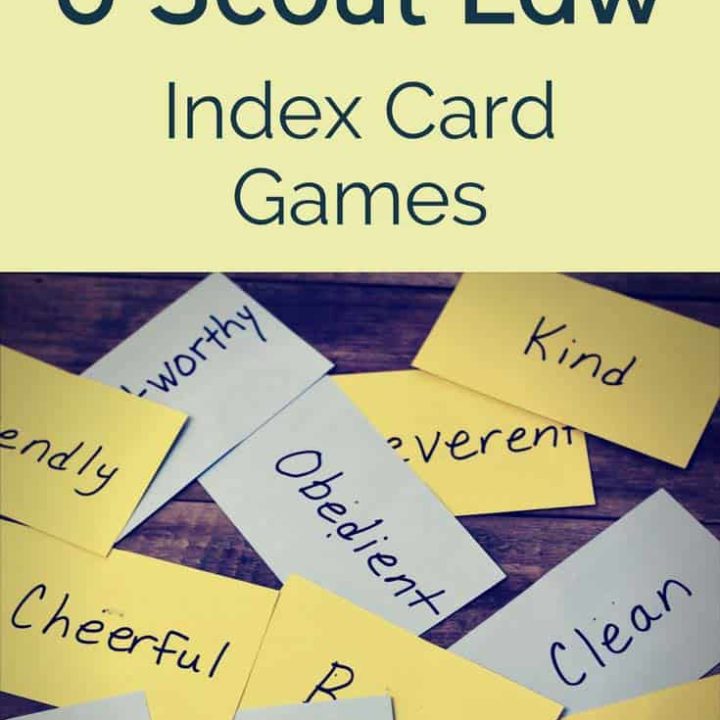 A versatile way to help teach and reinforce the points of the Law to Cub Scouts. 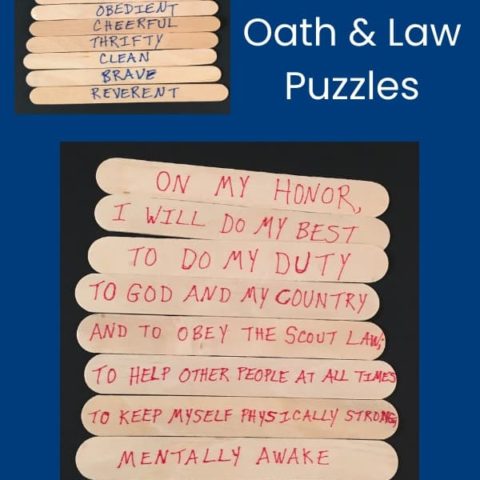 How To Learn The Scout Oath And Law With Fun Puzzles

Learning the Scout Oath and Law is fun for your Cub Scouts with these simple puzzles made from craft sticks. 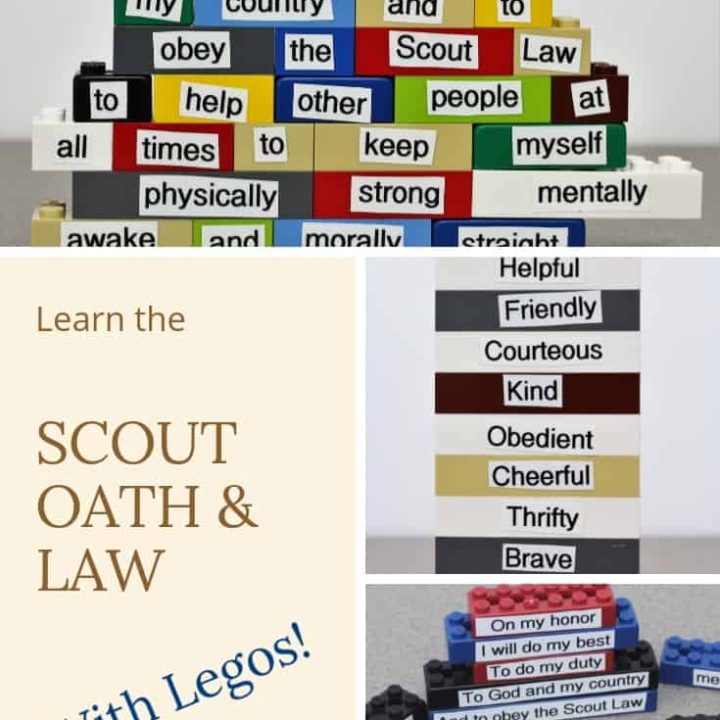 How to Easily Learn the Scout Oath and Law with Legos

Use Legos to help Cub Scouts learn the Scout Oath and Law! 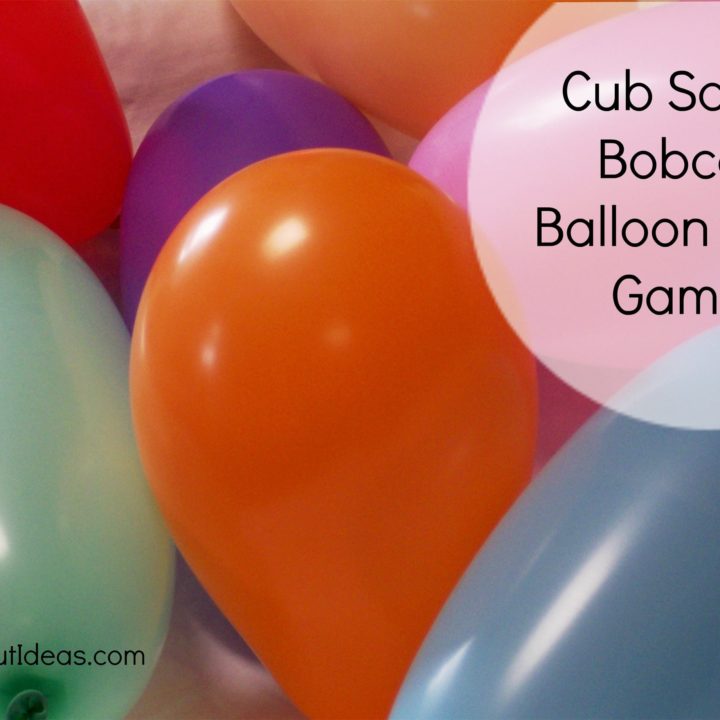 Fun ways for your Scouts to learn the important Bobcat requirements such as the Scout Oath and the Scout Law. 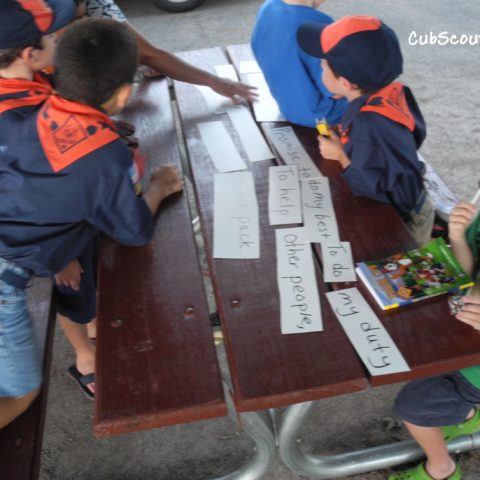 Not only can this activity be used to help Scouts earn their Bobcat rank, it can also be used as a review for the older Scouts. 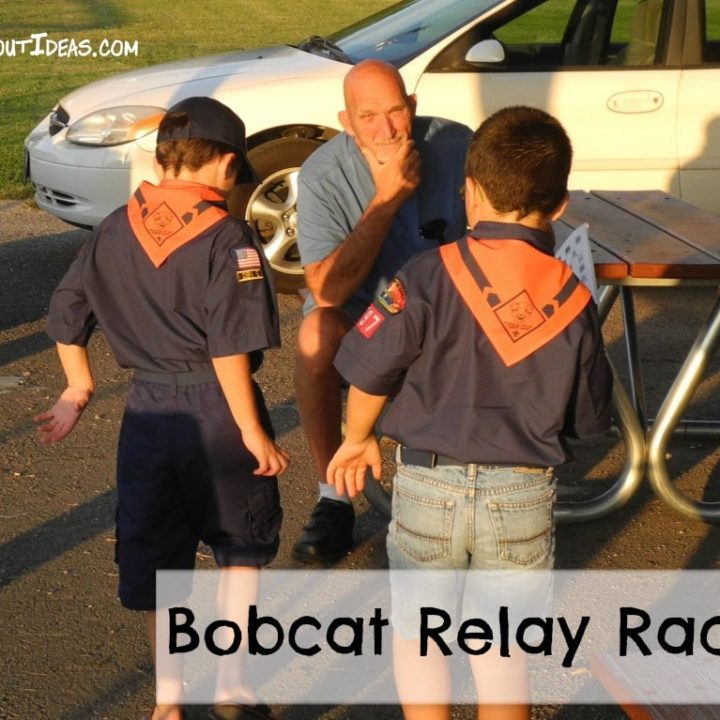 To help them memorize the Bobcat requirements (and to make it more fun), use this fun game. 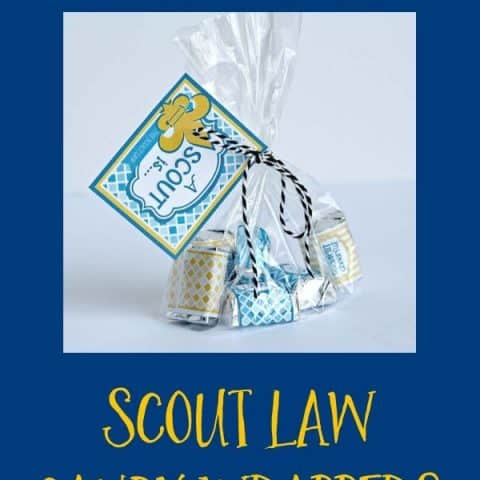 How to Make Fun Treats with Scout Law Candy Wrappers 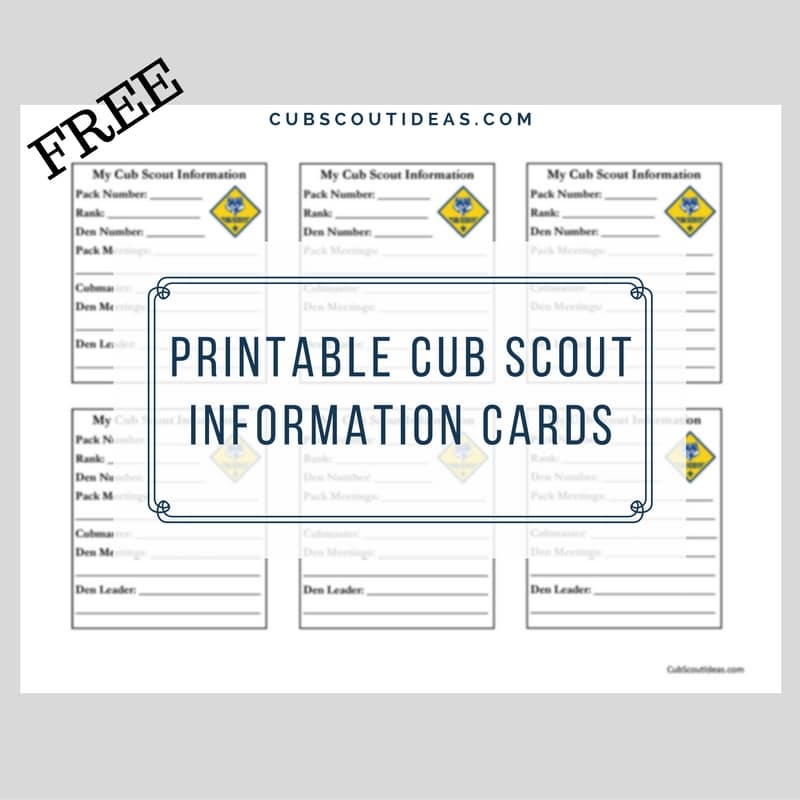 I discovered this awesome printable Cub Scout cards on Etsy!  It is so cute, but in a rugged, Cub Scout way. 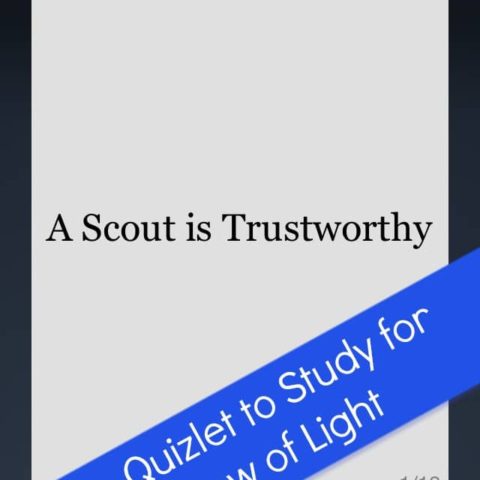 Quizlet is an incredibly useful tool that our school told us about.  And it's FREE!

P.S. What kinds of games does your pack use to help the kids learn the Oath and Law? Tell me in a comment!