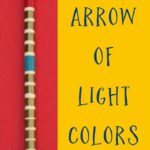 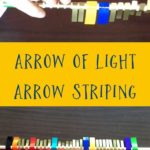 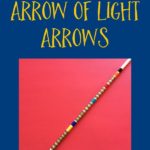 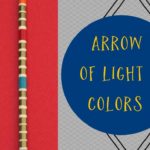 The Cub Scout Arrow of Light award arrow details the Cub Scouting career of Scouts. Learn what the stripes mean and how to place them on the arrow's shaft.

The Arrow of Light is Cub Scout's highest rank. It is the only Cub Scout badge that can be worn on their Boy Scout uniform.

In many packs, it's customary to honor Arrow of Light recipients with a plaque, a ceremonial arrow, or both–usually presented to them by their Webelos den leader.

Some packs will make their own arrows using a wood dowel rod, while different packs will purchase real arrows.

One of the traditions observed by many packs is to put stripes on the shaft of the arrow to symbolize the Scouts' individual achievements during their Cub Scout careers.

In my pack, our Scouts added the stripes themselves. In my friend Elizabeth's pack, the Cub Scout leader does this.

One of three methods is typically used to add the stripes. Some will paint the stripes on to the shaft of the arrow. Some will wind colored embroidery floss around it. Others will use adhesive vinyl strips.

Each method has its pros and cons. Paint may last longer, but it is the most difficult to apply. You have to paint carefully and stay in the lines, and it can get messy.

Colored embroidery floss needs some sort of adhesive so that it will stay attached to the shaft. It is also time-consuming if you want the thread to lay neatly.

Using adhesive vinyl strips is the easiest method. The only con to using adhesive color bands is that they may begin to peel off over time.

The Boy Scouts of America doesn't have a standard for what colors to use on the ceremonial arrows. When you search online for the information, you'll find some commonalities, but there are some differences.

Most sites suggest that they receive a gold stripe for their gold arrow point and silver stripes for each silver arrow point they earned. White stripes were used to indicate Webelos activity badges.

Now that we don't have activity badges or arrow points, we need to come up with a new process for the award arrows.  After some research and “trial and error” testing, here's what I think would work.

They may also work on additional elective adventures.

I measured the shaft on my son's arrow and checked the length of arrows being sold in an Arrow of Light kit on several websites to determine how much space we would have for stripes.

Using all this information, here is what I'm proposing.

Use 1/2″ stripes to represent each rank that the Cub Scout earned.

There won't be enough room to add a stripe for the seven rank required adventures, so use 1/4″ stripes to represent each adventure a Scout completes in addition to the required seven.

These stripes could be any color, but using gold, silver or white makes the most sense to me. Our pack will probably use gold for all of them.

Cub Scouts can earn many non-rank awards during their tenure, but there probably won't be enough room on the shaft to put stripes for all of them. We should reserve the room on the shaft for the awards that require the most effort.

In my opinion, these are the Cub Scout religious emblems, the World Conservation award, and the Supernova awards (one for Cub Scouts and one for Webelos).

Use 1/2″ stripes for these awards.

Place the Bobcat stripe on the end closest to the fletching. Leave a little space, and add the Tiger stripe. Next, add the stripes for the additional Tiger adventures.

Finally, add the award stripes closest to the arrowhead.

Until about 2020, the Arrow of Light recipients will have participated in both Cub Scout programs. Their career arrow will show this. They should have the gold and silver stripes for arrow points they earned under the previous program and gold stripes for elective adventures completed in the new program.

Each pack (or even each den) can make its own decision about how they want to stripe the Arrow of Light arrows, but I hope these recommendations will be helpful in making that decision.

P.S.  Here are my favorite Arrow of Light ceremonies.  Click on over and check out the different ceremonies!

I read about a Vince doing arrows. How do I get his address? Our pack has never don't this and I think this would be wonderful.

[…] P.P.S. Read about my recommendations for how to stripe the Arrow of Light career arrow. […]

I am working on Arrows for our AOL plaque. One Scout added a Lion Cerification. WHAT COLOR DO I USE FOR THE LION? The Lion is Yellow.. but with the new 2020 colors.. that's the same color as AOL. I guess I will use a real light lemon yellow for Lion, then use a gold yellow... (tone it down with a little Tiger Orange) for the AOL segment. My suggestion is: let Lions have the yellow... use a different color.. a special color for AOL, maybe a metallic bronze or copper.. (all my electives are gold).

I like the idea of using bronze or copper for AoL and use yellow for Lions! Thanks for the suggestion!

Thank you so much for this guide! I opted for the white “extra adventures” bands and I altered the awards section slightly but I think they turned out really well. I used embroidery floss and each arrow probably took me about 2 hours to do start to finish.

Here’s a link to a picture of the finished arrows: https://pin.it/7h4WBdr

if I used all the awards you listed.. I would need 2 arrows.. at 1/4" each segment. We need to add Lion color also.