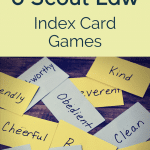 Scout Law games are a versatile way to help teach and reinforce the points of the Law to Cub Scouts. They're great for gathering activities!

I love it when we can use everyday items for super fun Cub Scout activities! Remember the paper plate shuffle?

Today, I want to tell you about 6 games that you can play with index cards that will help your Cub Scouts learn the Scout Law. Plus, they're just plain fun and perfect for a den meeting!

To prepare for these games, grab some index cards, and write one point of the Scout Law on each card. Turn the cards over, and write the number that corresponds to that point.

If you want to get fancy, you can buy printable index cards and print the points of the Law on them. And to get really fancy, laminate the cards!

Better yet, have each of your Cub Scouts make their own set of index cards! Take them up at the end of the meeting so you can reuse them.

Now, on to the games!

To play scramble, all you do is lay out the cards word side up and scramble them around. The Cub Scouts need to arrange the cards in the correct order of the points of the scout law.

For the younger kids, you can have them work in teams or as a group. If they are a little older, they can work individually on this.

If you have a set of cards for each Scout, you can have them race to see who can get them sorted correctly the fastest.

Slapjack is probably better for the older Scouts. This would be a good gathering activity as a review for them. The objective of the game is to collect a complete set of cards with all of the Scout Law points on them.

You'll need three people to play this game: two competitors and one dealer. It's also better to have at least three sets of cards.

Start by having the dealer shuffle the cards. The dealer will then start dealing the cards one at a time face up between the two players. When the first point of the Scout Law is dealt, the players will attempt to be the first to slap that card. The Cub Scout will keep the card if he's the first.

The dealer will then continue to deal the cards one at a time. When the second point of the Scout Law is dealt, the kids will try to slap it first.

Unlike regular slapjack, the Scouts will only take the top card that is the second point of the scout law.

For younger Scouts, you can just put the Scout Law nearby so that they can see it.  You can also announce which point of the law they should try to get before the cards are dealt.

To make the game a bit more challenging for older kids, have them keep up with which point of the Scout Law they're going for.

Vanishing card is a Scout memory game and makes a great gathering activity because the Cub Scouts can join at any time.

For this game, have all of the cards placed face up with the points of the Scout Law showing. They should be scrambled up on the table.

Give the kids a few seconds to look at all of the cards then have them close their eyes. A den chief or parent will then remove one of the cards. Instruct the Scouts to open their eyes and try to figure out which card was removed.

This can be done over and over again. To make it a little more difficult, you can move the cards around while the kids have their eyes closed.

For this game, you'll need a piece of poster board or butcher paper. Draw a 4 x 3 grid on it. If you want, you can number each of the squares within the grid.

Last school year, I finally decided to buy a big package of poster board, and I can't tell you how happy I was that night about 8 pm when my son said he needed a piece for school the next day! No leaving the house and wasting gas to get it because I already had some!

Shuffle the deck of index cards with the points of the Scout Law. Have the Cub Scouts lay the cards out on the grid in the correct order.

If any are not in the right place, remove them from the grid and hand them back to the Scout so that they can continue until all of the cards are in the correct order.

You can change this game up several ways.

For the younger kids, have a copy of the Scout Law nearby to help them out.

Use your grid again for this game.

Prepare for the game by placing the cards number side up on the grid in the correct order.  The Cub Scouts will take turns tossing a small bean bag onto the grid.

Bean bags are great for so many activities! If you don't have any, check these out! They're an Amazon best seller!

The Cub Scout must say the point of the law that they landed on. For example, if they land on number 8, the correct response would be “cheerful.” If the Scout answers correctly, turn the card over so that the word is showing.

If they don't know the answer, the next Scout in line will answer. The kids continue taking turns until all of the points of the Scout Law are uncovered.

As the cards are turned over, it will become harder for the Scouts to land on a square that hasn't been guessed yet. You could either let the Scout continue tossing the bag until he lands on one, or you could let the next kid in line take a turn.

This game is a bit more difficult because the Scouts will need to be able to figure out what number corresponds to each point of the Law. It's probably best for the older Scouts.

I can't think of a way to change this up so that it'll work well for younger kids. If you have an idea, leave a comment and let me know!

Scout Law baseball is more complex than the other games. You'll need to decide if it will work for your Scouts or not.

In addition, this game works better with a group of 10 or more kids. Think about it for a pack meeting or even as a campout game.

For this game, you'll need 14 index cards. One card will remain blank, one card will be marked with an X, and the remaining cards will be numbered 1 through 12.

Some of the cards have special designations.

To prepare, set up a small baseball diamond. You can use extra index cards as bases.

Divide the Scouts into two teams. Have the first team line up behind home plate. The leader will hold all the cards in their hand so that the kids can't see the numbers.

Each player will draw a card and say the point of the Law that corresponds to the number on it. If he answers correctly, he “runs” the number of bases indicated by his card.

If the base is already occupied by a Scout, that Scout will move enough bases so that the second person can get to their base.

For example, if there is a Scout on first base and the second player gets a double, the first Scout moves two bases to third base.

If the player doesn't know the correct answer or if they draw the X card, the Cub Scout is out.

Just like in baseball, the second team comes up to bat when the first team gets three outs. You can play as many innings as you like. Three is usually a good number. The team with the most runs wins the game.

Learning the Scout Law is easy for our Cub Scouts with repetition. Have your den work on it at every meeting. If you incorporate these Scout Law index card games, it won't seem like “work” at all!

What kinds of games do you use to help your Cub Scouts learn the Scout Law? Comment below to let us know.

P.S. Here are more Scout memory games to help your new scouts (and returning ones) learn the Scout Oath and the Scout law

9 Scout Memory Games for Learning the Scout Oath and Law

[…] the Bobcat relay race helps those young people who need to move around as they're learning. The index cards games help kids who are more visual […]

How do you memorize the Scout oath? - Year of the Dad

[…] I am a Tiger Cub Scout, a new member of the pack. I am learning the Scout Oath and the Scout Law and working on my Tiger […]

For the bean bag toss for younger scouts - I would just have them try to land on a square - the card gets flipped over and they say the word (or for non-readers someone tells them what the word says & they repeat it). Goal is to get all of them turned over & then, with help if needed, simply repeat all of the words in order.