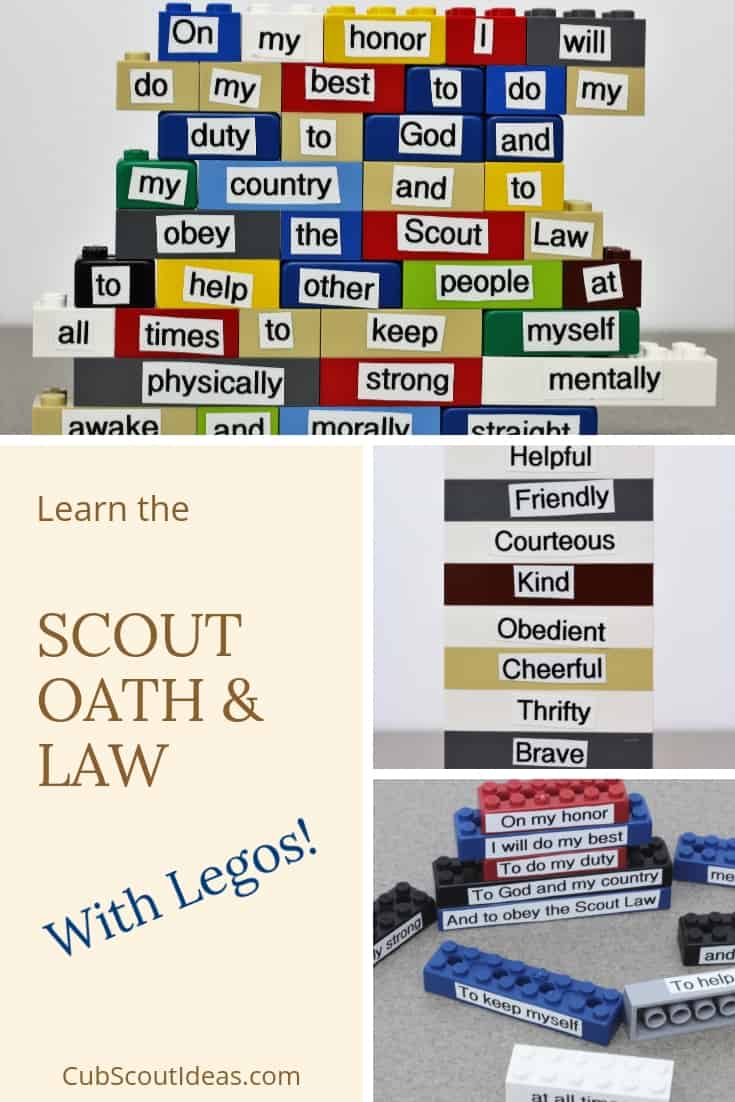 Use Legos to help Cub Scouts learn the Scout Oath and Law! Easily create puzzles using Legos and a labeler that are useful for several different games.

Learning the Scout Oath and Law might seem intimidating when a kid first joins Cub Scouts, but add Legos, and it becomes a super fun activity!

There aren't many little boys and girls who don't love building things with Legos. And there aren't many parents of those kids who haven't stepped on a Lego.  It hurts!  ?

Putting the words of the Oath and Law onto Legos makes a cool puzzle that will challenge the Scouts.  We don't expect the younger one to memorize the Scout Oath and Law, but the more times they're exposed to it, the better.

They are beginning to memorize the words, and more importantly, they will internalize the message so that they can live the Oath and Law.

It's easy to make these. All you need are Legos and a labeler.

I used the Brother P-Touch labeler.  I've had it for years, and I love it! The label tape is 1/2″ wide which is just a bit bigger than the side of the Lego, so I cut them down after the words were printed.

I scrounged some Legos from the massively huge box of them we have. If you don't have any extras, you can get them from Amazon. Other options for assorted Legos are eBay or Etsy.

Print the words to the Oath and Law with the labeler.  Cut them down, if necessary. Then pull the backing off and apply to the Lego.

For the older boys, I put one word of the Scout Oath on each of the Legos.  Younger kids will do better with a phrase on each one.

The Scout Law Legos each have a corresponding number on the opposite side so the Scouts can find out if the points of the Law are in the correct order.

Here are a few ways you can use these.

How would you use these Scout Oath and Law Lego puzzles?

9 Scout Memory Games for Learning the Scout Oath and Law

[…] want to come back to a den meeting. But if we say we're going to play the balloon bust game or the Lego game, they'll definitely want to come […]

We tried this idea with our tigers. There were a couple of challenges with this age group. The reading level of the children varied greatly and those who didn't read as well as others ended up just playing with the legos, ignoring the search for words/phrases they didn't know how to find. None grasped the idea of building something flat from the top down. One child did actually stack the pieces together in a wall, but in reverse order, stacking each phrase on top of the previous one instead of underneath. The rest just found each phrase and built their own lego creation, which worked out okay for practicing/familiarity anyhow. They still had fun and worked on learning the oath, but no one made what is shown in the picture.

This is a great idea. Can't wait to share it with other leaders.

I've used the craft sticks to help the boys learn the Scout Oath & Law but I think that the Legos would have more appeal, especially to the Tigers & Wolfs.