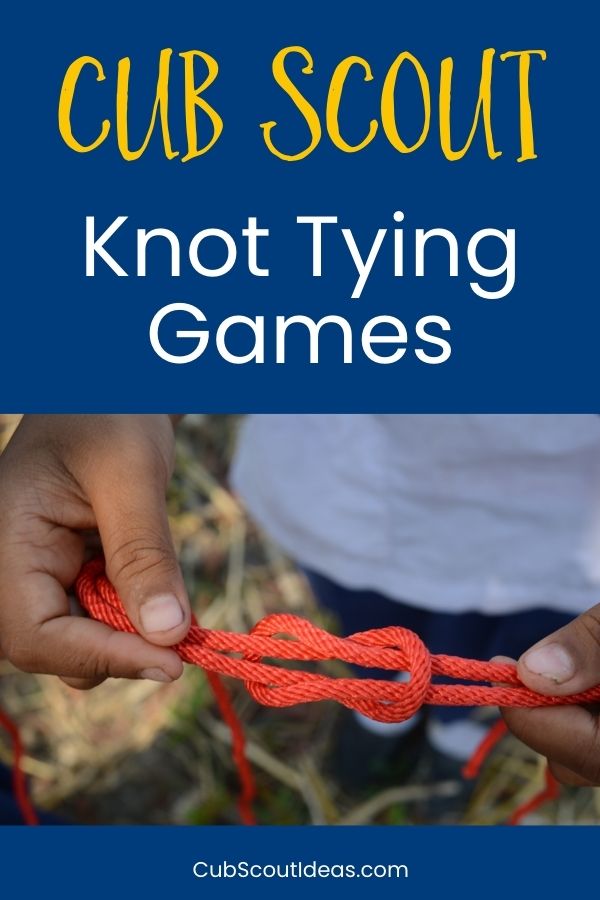 These knot tying games are great to teach kiddos how to tie knots. Use them for Cub Scout den & pack meetings as well as gathering activities.

Check out this knot tying printable PDF guide over in my Etsy shop! It's a perfect resource to help the Scouts.

One of the most important skills for a Cub Scout to learn is knot tying. Most of the knots take practice to perfect. But that practice doesn't have to be boring or serious. Instead let's play knot tying games!

There are many ways to make knot tying practice exciting for Cub Scouts of all ages. Here are 10 fun knot tying games and activities that can be modified for age appropriate engagement.

This is a fun team activity. Divide the den into two teams. Give each Scout a piece of rope. Stretch another piece of rope across the floor at the other end of the room.

At the signal, the first Scout runs down to the rope lying on the ground, ties their piece to the end using a square knot, and runs back to their team where they'll tag the next person.

Each Scout does the same. The first team to successfully tie all pieces of rope together using the correct knot wins.

In one of my favorite knot tying games, it is every Scout for themselves. Give each Scout a piece of rope about 3 feet long. Each player holds their rope. Every time “Simon says” to tie a certain knot, each Scout must do it.

Here’s another individual activity. Tie 8 or 10 different knots and put each one in a bag made out of fabric. The Scouts will try to identify each of the knots. You can let them put their hands in the bag or just touch the outside. Keep track of how many knots each Scout correctly identifies.

Let’s see how much your Scouts already know by having them quiz their peers. Have the kids pair up with a buddy. Give them each 3 or 4 cards with the names of different knots and a length of rope so they can create each one.

Blindfold one team member while the team member without the blindfold pulls a card and ties the knot. They then hand the knot to their blindfolded partner who must try to identify the knot. Have the partners switch roles so that everyone has a turn being blindfolded.

Caution: this game may get loud and giggly, but the Scouts will love it!

This knot tying game will help them learn to identify knots and also adds a bit of coordination and multi-tasking.

Before the game starts, collect enough pieces of rope for the number of Scouts you have. Tie different knots in the rope.

Have the group, including the den leader, sit in a circle. The den leader holds all of the ropes and will start the game.

One knot at a time, have the scout leader pick up one rope and say, “This is a (insert the name of the knot)” while passing the knot to the Scout on their right. That Scout replies by saying “A what?”

Here's where it gets interesting. After the leader and Scout complete their dialogue, the Scout must now introduce the knot to the person to their right while accepting a new knot from the leader.

The Scout will need to say all of the lines–the knot name to the person on their right and the question back to the leader.

The script goes back and forth from left to right until everyone is both passing and accepting a knot and saying both parts of the script.

At the end of this game, not only will the Scouts be holding knots, but they will also be tongue tied!

This knot game mimics the “Mother, May I?” playground game. Here is how you get permission to take a step forward.

Line up the Scouts at one end of the room. Give each Scout a 3 foot length of rope.  Call out the name of a knot. Each Scout ties the knot, and an adult judge will check the knot.

If the knot is tied correctly, the Scout can take one step forward. This process is repeated until a Scout is across the finish line.

Like the previous game, this one tests the Cub Scouts' skills, but this one is timed.

Start the clock at 60 seconds. Call out each of the knots that Cub Scouts need to know (overhand, square, bowline, 2 half hitches, taut line), and see how many of them each Scout can tie within those 60 seconds.

We want to be sure that Scouts understand that knots can be used to save lives too. This game emulates a throw rescue while on dry land.

Divide the group into teams. Give each team a coil of rope that has an empty milk jug tied to the end. You might want to put a little water in the jug.

Use adults to represent drowning victims. Each scout in turn throws the rope to the drowning person who grabs it and then lets it go. But don't hit them with the jug!

The player recoils the rope and hands it to the next player.  Repeat until all den members have cast successfully.

This is perfect for two Cub Scout requirements.

Bear Elective Adventure Salmon Run Requirement 6: Show how to do both a reach rescue and a throw rescue.

Webelos and Arrow of Light Elective Adventure Aquanaut Requirement 3: Explain the meaning of “order of rescue” and demonstrate the reach and throw rescue techniques from land.

Who doesn’t love a group activity? This game calls for up to twelve people to stand in a circle. Each person needs to grab someone else’s right hand who is not directly to the right or left of them. Then reach inside the circle with your left hand and grab someone else's.

After all the hands are grabbed, the group will form a human knot!

The goal is to get the group untied without letting go of hands. The Cub Scouts may need to twist, turn, step over, under, or between the linked hands.

Depending on how many people are in the circle and how the hands are linked, once untied, there may be an inner circle and an outer circle. Encourage them to keep holding hands and have as much fun as possible.

If you want to end your meeting on a more reflective note, this activity is perfect.

Each Scout is given a 3-foot length of rope. They then tie their rope to their neighbor's rope with a square knot. After everyone has tied their knots, the rope should be in a circle.

The den leader, den chief, or denner will then say, “This circle shows the bond of friendship we have in Cub Scouting. Now please join me in the Scout Oath.”

Whether you are working on team building, individual skill, or speed, these games can your Cub Scouts excited about tying knots. Modify the activities as you see fit to accommodate the skill set of your Scouts.

Several requirements can be fulfilled by playing knot tying games.

Wolf Required Adventure Call of the Wild Requirement 5. Show how to tie an overhand knot and a square knot.

Arrow of Light Required Adventure Outdoor Adventurer Requirement 4. Show how to tie a bowline. Explain when this knot should be used and why. Teach it to another Scout who is not a Webelos Scout.

Arrow of Light Required Adventure Scouting Adventure Requirement 5A. Show how to tie a square knot, two half hitches, and a taut-line hitch. Explain how each knot is used.

What other knot tying games or activities has your den or pack played? Share in a comment!