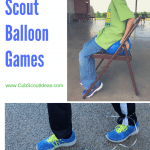 Have you ever had a den meeting that just didn't go right? The Scouts just couldn't stay on task. Or the activity was too hard or too easy. Or they just weren't interested in it. Or they finished more quickly than you thought they would.

Rather than trying to force the activity, pivot to something new. Balloon games like these are fun and can be just what you need to save a meeting from being a bust. Did you see what I did there?? 😉

One note:  Be sure to ask about any latex allergies before you give any of the Scouts a balloon.

All you need for this game is a balloon and a length of string or yarn about 2 feet long for every Scout.

Have the Scouts blow up their balloons. Tie one end of the string to the balloon. Tie the other end around one of their ankles.

Explain to the Scouts that when you say GO, they should try to pop other Scouts’ balloons by stomping on them while trying to keep their balloons from getting stomped.

Whenever a Scout’s balloon is popped, they leave the game. Play until only one Scout has an unpopped balloon.

This could easily be a gathering activity. Just blow up the balloons and tie the string on. As each Scout arrives, they can tie the other end of the string around their ankle and join the fun.

For this game, divide the Scouts into two team.

Put two chairs at one end of the room, and have the two teams line up at the other end behind a starting line.

Give a balloon to each Cub Scout, and have them blow it up and tie it.

When you say “GO,” the first person on each team will run down to the chair, holding their balloon.

When they get to the chair, they have to sit on the balloon and try to pop it. When they pop the balloon, they run back to their team, and the next person goes.

If the balloon doesn't pop right away, the Cub Scout runs back to their team and goes to the end of the line to wait for another turn.

The race will continue until everyone has popped their balloon. The first team to pop all of their balloons wins!

Another balloon game that's fun for Cub Scouts is the Bobcat Balloon Bust Game which helps the Scoutss learn (or review) the Bobcat requirements.

Balloons are one of those things that I like to keep in my den supply bin. That way, you have them ready for balloon games any time!

Order your balloons in bulk from Amazon.

What kinds of balloon games has your den played?