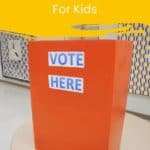 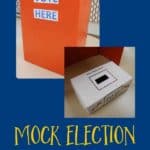 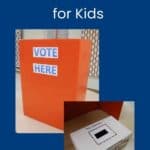 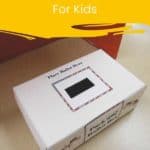 Kids can learn about citizenship with this mock election game where they cast their ballot for their favorite candy bar.

With the change in the Cub Scouting program back in 2015, the Cub Scout pack meeting plan themes became the 12 points of the Scout Law. While citizenship isn't one of the the themes in the plans, you can still have a citizenship theme, or you can add the mock election game to the Loyal meeting. You can also use the instructions as a candy bar election lesson plan.

As the Scouts are completing their word searches, there may be words they don't know–especially the Tigers.  Leaders and parents can talk to them about what they mean.  Love it when a fun activity becomes a teaching moment!

I got a wonderful mock election idea from Arlen Ward. On his old website, he had a post about electing your favorite candy bar. This was one of the kids' favorite Cub Scout games for pack meetings.

Here's how we did it.

To give the election a more authentic feel, I made a ballot box and polling booth.

The ballot box was a simple shoe box with a square hole cut in the top. I wrapped it in white paper then taped on pictures of American flags plus a “Pack 297 Ballot Box” sign.

The polling booth is a trifold presentation board that you can get through my Amazon affiliate link.  I covered the back with solid red wrapping paper and put a “polling place” sign on it.  This gave the kids some privacy as they vote.

To add to the excitement, I ordered these campaign hats for the kids.  Did you know they're called “skimmer hats?”  I didn't.

After our opening ceremony, our Cubmaster used this introduction:

The right to vote is a duty as well as a privilege. It is important for all citizens to vote in every election to make sure that we keep our democratic system of government. People who do not vote lose their voice in the government. You want to make sure that you are informed about the issues and the candidates before you vote. Tonight, we are going to have an important election. We're going to vote on your favorite candy bar! Throughout the meeting, you'll hear from our two candidates. But first, everyone must register as a voter. If you're not registered, you can't vote! Den chiefs, will you please pass out the voter registration forms?  After you've completed your form, we'll call each rank to come forward to turn in your registration form. You'll get your voter registration card and the awards you've earned.

Register to Vote Before Awards Ceremony

Your election will feel much more authentic if the Cub Scouts have to register to vote first. Feel free to use the Voter Registration Forms that I created. Enter your email below to download them.

After the Scouts have filled these out, each rank was called forward.  The Cubmaster called each Scout's name and announced the awards they had earned.

The Cub Scout received their Voter Registration Card (download below) and a Vote banner that contained his awards. You can find the instructions for making these banners in this post.

Next, we introduced our two campaign managers who had a couple of minutes to kick off their campaigns.  Their campaigns were pretty funny!

Make sure your Scouts are sitting with their dens and enlist the den leaders to help with this part.

Allow the kids to vote for their favorite candy bar using these four methods of voting.

Your den leaders will most likely need to help lead this part–especially for the younger Scouts.

We did the one-Scout-one-vote election last, and that decided our winner.

We enlisted the help of our den chiefs to run the election.

Each den was called up to vote, and they took their voter registration card with them as they walked to the polling booth.

The Den Chiefs checked the Scouts' registered voter cards then gave them a ballot.

When all of the dens had voted, the Den Chiefs counted our ballots.

While they counted the votes, our campaign managers had a “commercial” for their candidate.

We showed the results using a laptop and overhead projector.  If you don't have access to that equipment, you can use a flip chart or poster board.

We finished off the night with the Scouts getting one of the winning candy bars!  Don't forget to find out if any of your Cub Scouts have allergies!

Of all the Cub Scout pack meeting themes we've done, this one was the most exciting for me.  And I think the Scouts loved it too!

What activities have you done to teach your den or pack about elections?  Share them in the comments.

P.S. If you liked this pack meeting idea, sign up below for more Cub Scout information!

[…] you’re focusing on elections during your pack meeting, here’s a fun way to present awards the boys have earned using […]

Do you happen to have the campaign speeches people used? And how many voter booths did you make? Such a great idea!

Thanks for your kind words!

Honestly, we had two of our adults serve as the "campaign managers," and they just made up their speeches on the spot. They talked about stuff like how "chocolately" their candy bars were, how crispy the cookie parts were, etc. The sillier they were, the better the boys loved it.

At the time, we had about 35-40 boys in our pack, so I just made one voter booth. Hope this helps!

We do something similar in our Pack every November, but we vote for the Pinewood Derby Car Design categories. In October we let the boys throw out ideas and then in November they cast their votes using a ballot.

Great idea! Thanks for sharing!

[…] you’re focusing on elections during your pack meeting, here’s a fun way to present awards the boys have earned using […]