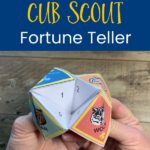 Step-by-step instructions on how to make a cootie catcher (aka fortune teller)! Personalized for Cub Scouts, this is a fun gathering activity.

Do you remember cootie catchers? Some of you may know them as fortune tellers. I used to love those things! I remember playing with my oldest friend, Susan, when we attended Brandon Elementary School. So fun!

What is a Cootie Catcher?

It has many names–Fortune Teller, Chatterbox, Salt Cellar, and Whirlybird for example–though they all generally refer to the same thing: an origami-like object made from folding a piece of paper that's used in kids' games.

After the paper is folded, kids label parts with numbers or colors. They also write messages inside the flaps.

One of the children would manipulate the cootie catcher based on the player's choices until one of the messages is revealed.

If you were telling fortunes, the message would supposedly tell your fortune.

Here are some of the types of messages you might find.

If the player must do an activity, you might see these options.

Cootie catchers have been around for years and years. This article on Mental Floss has a fascinating history of fortune tellers.

Back in the day (and I'm not going to say how long ago that day was! HA!), we used these for fun. Now, cootie catchers are being used as learning tools. If you search for “cootie catchers” on Pinterest, you'll find them for math, reading comprehension, an author's purpose, the Bill of Rights, the scientific method, writing prompts and more.

You can even find a few Cub Scout Bobcat cootie catchers on Pinterest. Unfortunately, most of the websites that had them have been shut down. The one or two that I found were based on the old Cub Scout program, so they had options like the Cub Scout Promise and the Law of the Pack.

So, I decided to create a new version to share with you! This Cub Scout Bobcat Cootie Catcher includes the current requirements for the Bobcat rank. Here are the “tasks” that the Scouts will do to help them earn their Bobcat rank.

At first, I couldn't quite figure out what tasks I should include regarding the Oath and Law because Cub Scouts don't have to memorize them until they're working on their Arrow of Light. I decided on “say any part of the Scout Oath that you remember” and “Say two points of the Scout Law.” If you have another suggestion for these, please leave me a comment below.

Even after the Scouts earn their Bobcat badge, they can still use the fortune teller to practice their Cub Scout knowledge–especially the Scout Oath and Law. When they cross over to Scouts BSA, they'll be saying the Oath and Law a lot!

After I originally published this post, several of you asked for a version that you could personalize, so I modified the original one to make a Cub Scout cootie catcher template.

The images of the badges and the numbers are still on the Cub Scout cootie catcher template.  All you need to do is write in the questions you want to include.  There are 8 spots.  If you don't have 8 things, include some silly questions like these:

You can download the version of the fortune tellers that I created by entering your email below.

How to Play Bobcat Cootie Catcher

The instructions on how to fold the cootie catcher and how to play cootie catcher on the printables. The packet you can download below includes the Bobcat version, a Cub Scout version that you can personalize, and a folding instruction sheet.

Scouts can make the Cub Scout Bobcat fortune tellers together as a den activity or individually as a gathering activity. They can take them home and play with a parent or sibling to practice their Bobcat knowledge.

Make several of these to keep in your den bucket as a backup activity. It's always good to have a backup in case your den plans take less time than you expected.

What do you think?  Will the Cub Scout Bobcat Cootie Catcher be helpful for your Cub Scouts?

P.S.  If you looking for more activities that will help Cub Scouts learn the Bobcat requirements, you'll find them by clicking here.

I received the email but the download isn’t working. It comes up with a screen of jibberish.

I emailed you the printable today. Thanks!

hello! wonderful idea, i'm planning on using this for my Tiger den at our next meeting this week. I printed a few copies, but the Webelos and Bear badges have a big solid black square around them which blocks the numbers next to the pictures. Is anyone else having this problem when printing? Maybe it's my computer/printer. When I look at the print preview there isn't any black square so i'm unsure.

Thank you for this cute idea! My tiger cubs loved this and their parents had fun telling stories of cutie catchers from their childhood!

[…] couple of months ago, I shared a Cub Scout cootie catcher that the boys can use to help them learn what they need to know for the Bobcat badge.  Several […]