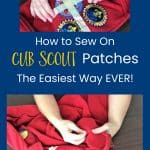 Learn the easiest way ever to hand sew on patches and badges for the Cub Scout uniforms. This sewing technique for attaching patches is super quick!

When your kids join Cub Scouts for the first time, there are lots of things that you as a new Cub Scout parent need to figure out. One of the most important is to get their unform ready for the first meeting.

If your Scout Shop is like mine, the employees are super helpful when you go in to buy your child's uniform. They'll show you which badges and patches you need to get started.

When you get home with the uniform and a bag of Cub Scout patches, your first thought is, “where do these things go?” That's why my parents' guide to Cub Scout patch placement is the most visited article on my blog.

How to Attach Cub Scout Patches to the Uniform

The next question that comes up is “are the Cub Scout patches iron on?” Sorry to tell you that they aren't. 🙁

But you do have several options of how to attach Cub Scout patches onto the uniform. My new favorite option is listed last.

Many people use Badge Magic. In fact, that's what I used for my older son's first uniform. It worked pretty well for the first couple of years. But by the time my son was a Bear, the edges started peeling up.

Have Someone Sew for You

There are some people who will sew patches on for you. Of course, this option assumes that you've planned ahead and it isn't the day before your meeting. Not that I would know anything about that.

A woman I met at Cub Scout day camp sews them on for $1 a patch. She's really doing it as a service for the Scouts because she donates the money she makes.

Another person I used charged $5 per patch. I was in a time crunch and couldn't take it anywhere else, so I paid that. I do think that's pretty expensive, and I didn't use her again.

Use a Sewing Machine

If you have a sewing machine, you can machine sew the Cub Scout badges. If I only knew how to use the sewing machine my mother-in-law gave me…

With all these options, I usually hand sew the patches. But that option isn't without its negatives too.

Some of the problems I've had are:

And that doesn't even count the number of times I've shed blood for Scout patches when I poked the needle into my finger! ?

There had to be a better and easier way to sew on those Cub Scout patches!

And I found it on Clarke Green's site, Scoutmaster CG! He writes and podcasts primarily about Boy Scouts, but he has resources that are applicable for Cub Scouts too.

Like Clarke tells us, with this method “you can hide the stitches behind the patch this way and will only need one thread color that matches the shirt rather than the patch.”

I had to read through Clarke's description a few times before I could visualize it in my head. But when it clicked, I realized that this has to be the easiest way to hand sew patches and badges on a Cub Scout uniform!

I couldn't wait to try it out! It was as easy as I thought it would be.
You can see the technique in action by watching this video. Simply click on the image to see it.

Bonus tip: If your pack number is more than one digit, sew the patches together first then sew the one big patch on. So much easier than sewing 2 or 3 individual patches on.

Let me know what you think about this method!

Don't forget to read up on the Cub Scout uniform badge placement.

P.S. You can learn about temporary Cub Scout patches here.

Look up a product called Badge Magic on Amazon. It's a life saver, and you can reinforce the badges with a few stitches if you wish to prevent peeling, but man is it so much easier!

Great tips. If I see on the Bobcat patch with my sewing machine, do I sew through the pocket? It will not be useable. But does the pocket need to useable? Do Cub scouts have to put items in that pocket, I mean. Like a notebook or penlight?

Most Scout Shops sew on patches, generally $3-$4 per patch.

If you are using a machine, use transparent thread for the top, and normal thread in the bobbin, or it can mess up the tension on your sewing machine.

Washable glue sticks work great to hold on patches long enough to sew them on with a machine.

Sew the numbers together before sewing on the shirt. When my Pack celebrated their 50th year, I ordered the 3 digits and 50 year bar on one patch. Price wasn't bad considering the cost of 3 digits and the 50 year bar.

Not only do I love collecting patches of all kinds, but I also love sewing on cub scout patch , so I really enjoyed this article. This article not only introduces what a patch is, but also tells us how to make a patch, this article helped me a lot, thank you very much!