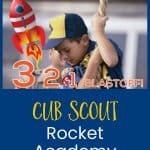 A Rocket Academy is a great Cub Scout recruiting event! Find out what space activities for kids that we did and some things we learned for next time.

Hosting a fun community event is a great way to introduce Cub Scouting to new families. My pack has done several of these including a geocaching event. Today, I want to tell you about our Rocket Academy.

Using this format, the kids have fun while parents get information in a more relaxed environment than a traditional round up.

When we started planning our Rocket Academy. I envisioned having different stations with rocket-related activities. Here's what we did.

I'll talk more about each activity later in this post.

The first part of any successful event is promotion. Folks need to know about it in order to attend.

I wanted to have a very nice, professional flyer, so I used the website, Fiverr.

On the site, people advertise the jobs (called gigs) that they'll do for $5. I've used them for quite a few things including making this Rocket Academy flyer.

We printed quarter page flyers and handed them out at our school's “Popsicles on the Porch” event where students find out who their teacher will be.

We also printed full page flyers that were hung in area businesses. Our local weekly newspaper published our event.

I posted it to many of our local Facebook groups. Using the image of the Rocket Academy flyer was very eye-catching.

We are fortunate to have a good relationship with our local Boy Scout troop. The boys are always willing to lend us a hand when we need volunteers, and the Rocket Academy was no exception. Six Boy Scouts came out to help us man our stations.

We also asked parents to volunteer. I used an online sign up called Volunteer Spot which really helps organize volunteers for any event.

Layout of the Rocket Academy

Our charter organization is a church, so we held our event in their parking lot.

The stations were placed so that they weren't too close together. While none of the activities were too dangerous, we didn't want to take any chances.

The volunteers at each station made sure that the boys were well away from the “launch pad.”

Our event was held in August in Tennessee, and it was HOT! We set up some pop up canopy tents so that the boys could build their rockets under a shade.

This had to be my favorite activity!  The boys were amazed at how high a simple paper rocket could fly.

You'll need to build a launcher and have the supplies to make the rockets there. I wish we had built a few more example rockets to have on hand that day.

There's nothing like watching these little rockets pop! The boys were so cute as they placed the rocket and ran like crazy.  The trick to making these successful is only putting a small amount of water in the film canister.

For all of these activities, I looked for something that would be consistent so that the boys' launches would be successful.  I had to go through lots of water bottle rocket designs to find one that was fairly consistent.

This video showed the design that worked the best for us.

There were three things that I think helped:

I wrote about another vinegar and baking soda activity, the chemical reaction car. It's the same concept, but a car rather than a rocket. 🙂

I included this activity because I thought it would be easy for the younger kids.  While this was a fun activity, I don't know that I would include it again.  The rockets didn't seem to fly as well as we thought they would.

We hung two strings so the kids could race their balloons. They blew up their balloons (sometimes with the help of a balloon pump) and held the opening tightly while an adult taped the balloon to the straw.

You could also put a binder clip on the end of the balloon. When both balloons were in place, the kids let go and watched them fly across the string.

Our District Executive brought the launcher and rocket kits. He gathered a few kids at a time to help build and launch the rocket. This was very popular!

We kept our snacks simple–just rocket-shaped rice krispy treats and bottled water. We used these cute rocket-shaped cookie cutters to cut them out.

One of our parents shared a great idea with me a couple of years ago. Instead of buying the full-sized, 16 or 20 oz. bottles of water, buy the small 8 oz. bottles for the kids. There is a lot less waste.

I brought construction paper, crayons, and these fun foam outer space stickers so kids could make their own creations.

At our information table, we had a printed pack calendar for the year, applications, and BSA medical forms. We also had some brochures and flyers that our council provided for us.

Current Cub Scout parents were there to greet the new parents, answer questions and encourage them to sign their kids up for Cub Scouts.

Key Learnings from Our Rocket Academy

There were a few things I wish I had done or had done differently.

Our Rocket Academy was a blast! The boys enjoyed it, and we introduced Cub Scouting to quite a few new families.

What has been the most fun recruitment activity you've ever done?

P.S. Check out all my posts about recruiting Cub Scouts!

[…] handed these out at our Rocket Academy, but I need to make some more because we've had a lot more boys join since then.  That's a […]

How to Make Alka Seltzer Rockets with Film Canisters

[…] den meeting that I decided to do it with all the Cub Scout ranks during our Cub Scout Day Camp. 200 Scouts with 200 rocket explosions was so much […]