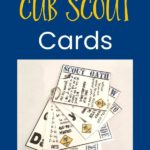 I discovered this awesome printable Cub Scout cards on Etsy!  It is so cute, but in a rugged, Cub Scout way.  When I saw them, I knew they would be perfect to give to our Cub Scouts as we started the new year–especially the new Cub Scouts.

On a single page, you'll find the Scout Oath, the Scout Law, the Cub Scout motto, the Outdoor Code, the Leave No Trace Principles for Kids, and the Scout slogan.  You can print the page and cut it so that you have individual cards for each of these.

The printable Cub Scout cards are a fun way to learn some of the things they need to know to earn their Bobcat rank.  The other Scouts can use them to review their Cub Scout basics.

We say the Scout Oath and Scout Law at every meeting, and these cards will be very handy for our younger Scouts who don't have to memorize them until they are a bit older.

The cute printable Cub Scout cards are only $1.  It can be purchased and downloaded from my Etsy affiliate link.

We handed these out at our Rocket Academy, but I need to make some more because we've had a lot more Scouts join since then.  That's a GREAT problem to have, isn't it?  🙂

CountryDaisee, the woman who created the Cub Scout cards, offered some great suggestions for the cards, and I followed her advice.

Here's what I did:

Purchased and downloaded the file. The page is a pdf document.

Cut the cards apart.  I used my Swingline paper cutter, which I love!  But I just discovered that they have a upgraded model.  It has a clamp to hold the paper down and a blade wear indicator so you know when it's time to replace the blade.

Pretty cool!  I have two paper cutters already, but I might just have to put the new model on my wish list.  😉

Laminated the individual cards.  I have a Scotch thermal laminator that has seen its share of Cub Scout stuff–we've used it to laminate Cub Scout day camp name tags.

Check the price on this.  Right now, it's almost $60, which I wouldn't pay.  If that's the price, look on the right side of the screen where you'll see “Other Sellers.”  Amazon's price is about $32, but it's back-ordered.

To me, it would be worth the wait for the better price. I used the large laminating pouches and put all 6 cards in one pouch.

Cut the laminated cards apart.  You could just laminate the entire sheet without cutting the cards out, but you wouldn't have a “border.”  I worry that with a lot of handling, the edges would start to come apart.

Punched a hole in the top left corner. I used my trusty single hole punch.

Put the set of six cards on a shower curtain ring.   I had several packs of these that I got at Goodwill.  You never know when something from the thrift store will come in handy!  :)You can also use these loose leaf binder rings.

I love these cards!  How would you use these?  Be sure to share your great ideas in the comments!

P.S. If you're looking for more activities to help your Cub Scouts earn their Bobcat rank, click on over to this page!  There are a bunch of fun things to do on the trail to Bobcat!

[…] shared one of the cool printables that helps the boys learn things like the Scout Oath and Law, the Leave No Trace principles, and […]

[…] shared one of the cool printables that helps the boys learn things like the Scout Oath and Law, the Leave No Trace principles, and […]

They should work now! Thanks for letting me know.

These look awesome, but the links don't work.