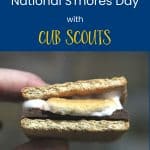 National S'mores Day is August 10th.  Who knew there was an entire day to celebrate these ubiquitous campfire treats?

No one knows who invented s'mores.  According to Wikipeida, the Campfire Marshmallow company published the first s'mores recipe in the early 1920s where it was called the Campfire Graham Cracker Sandwich.  Here's that recipe as it was originally printed:

Place a thin layer of sweet chocolate on a graham cracker, then a toasted marshmallow.  Cover with another graham cracker.  Especially for Boy Scouts and Girl Scouts.  To be made around an open fire.

In 1927, the Girl Scouts published a book called Tramping and Trailing with the Girl Scouts.  It included a recipe for “Some More” which was the first time that term was used.  I had to chuckle because the recipe included this warning:  “Though it tastes like ‘some more' one is really enough.”

How to Make S'mores

There are so many different ways to make s'mores!  Roasting your marshmallow over a fire is the traditional way. When you have Cub Scouts around an open fire, you'll want to make sure they're safe. Read about how to safely make s'mores.

These roasting forks will make it easy for the Scouts to toast their marshmallows without burning themselves. You can find all the s'mores supplies and ingredients you need here.

Another great way to make s'mores is using the HERO Grill. It's a small portable charcoal grill that doesn't flame up very much, so it's perfect for the Cub Scouts to use. 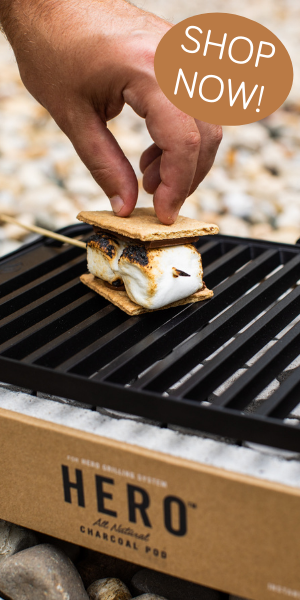 Even if you don't have a campfire, you can still make s'mores.  Your microwave is an excellent substitute for the campfire.  You can use this fun microwavable s'mores maker.  The arms hold the s'more together, so you'll have nice and neat s'mores when they're done.

I just ordered one in red!  My boys are excited about using it to make s'mores.  It just looks fun, doesn't it?

Did you know that you can make s'mores using a terra cotta pot for your fire? It's really easy. And the kiddos can build their fire pot themselves. Read the instructions in this post about halfway down.

If you're grilling burgers for dinner, make some s'mores while the grill's still hot! I love this s'mores maker basket. Load up the s'mores ingredients, and throw it on the grill. You'll have yummy s'mores in no time.

You can also put this in the oven for the days when it's too rainy or cold for grilling.

There are many yummy s'mores variations that you can make in your oven.

Speaking of “ovens,” have you ever made a pizza box solar oven? We have, and it's super fun! They're perfect for s'mores.

Find out how to make them by reading this post.

Have you seen these s'mores makers? One just plugs into an electrical outlet, and one uses sterno.

This little appliance just needs to be plugged in, and it's ready to make your s'mores. While you still need to supervise them closely, this looks like a great way for the little kids to make their s'mores safely.

Now, this s'mores maker is just downright cute! It uses chafing fuel for the heat. Wouldn't it be great at a camping themed Blue and Gold banquet?

Making s'mores can be fun, but if you want the world's easiest s'mores, check these out!

Princess Pinky Girl has come up with a s'mores recipe that practically makes themselves. No fire, no grill, no microwave–just open up a couple of jars and a box of graham crackers!

Y'all! There are sooo many variations on the humble s'more these days. I would consider some of them to be gourmet desserts. That's a long way from the recipe in the 1927 Girl Scout book. Here are some of my favorites.

My first two favorite recipes come from my good friend Mel from Adventures of Mel. Her first one took me back to Cub Scout day camp! In the past, we had our Webelos cooking banana boats on a campfire, and I always told the Scouts that they had to make me one too!

But Mel gave it these banana boats a little twist. She threw some teddy grahams in there turning these into s'mores. I can't wait to try this myself.

Mel's other awesome recipe is for campfire cones. This one is perfect if you don't want to run the risk of someone burning themselves while toasting their marshmallows.

For these, the marshmallows and chocolate are stuffed inside an ice cream cone. They're wrapped in aluminum foil then put on the grill. After a few minutes, you'll have s'mores cones!

You had me at Nutella. I love that stuff! The View from Great Island has an awesome Nutella s'mores bar recipe.

Makes me want to lick my screen! 😉

Now, who can resist s'mores nachos? The folks from Let's Camp S'more brings us this awesome dessert.

I would probably have some extra graham crackers to scrape the pan with! 🙂

Save some of those graham crackers for Shugary Sweets' 3 ingredient s'mores dip.

This looks so good! And I love that it's quick and easy to make.

If you want to make some awesome s'mores desserts, you have to check out Jan McCracken's ebook, S'mores Galore: Ooey Gooey Recipes (No Campfire Required).  I just got it, and I can't wait to make some of these recipes.

S'more Pizza, S'mores Lava Cake and Sourdough Gone S'more! are just a few I want to try.  Jan even has a slow cooker s'more cake recipe.

Looking for a yummy treat that's also a fun activity? Make fudge in a bag!

Since s'mores are such a fun treat to make and eat, why not play some s'mores games?  You could even have an entire s'mores pack meeting.

Not long ago, I bought the Toasted or Roasted game.  Grant and I have played it several times, and it's a fun game.  Because it's in a resealable plastic bag with a handle, the game could easily be taken on a camping trip. You can read my review of the game here.

We haven't played it, but the S'mores Card Game looks pretty fun!

And of course, “there's an app for that.”  Yes, you can play a s'mores games on your iPhone or iPad.  Build your own s'more with More S'mores.

So, whether it's National S'mores Day or not, enjoy these yummy treats!  How do you enjoy s'mores?

P.S.  If you're going to make your s'mores at a campfire, check out my other campfire posts!

[…] The HERO Grill is perfect for making s'more safely because it's small and doesn't flame up very much. Get yourself one to celebrate National S'mores Day! […]

How to Make a Pizza Box Oven ~ Cub Scout Ideas

[…] All you need is a pizza box, a few basic supplies and the sun, and your Cub Scout can make some cool “solar” recipes, including English muffin pizzas and s’mores. […]

[…] National S’mores Day is coming up soon! An entire day devoted to those yummy campfire treats! But we need to remember that they are campfire treats, so let’s talk about how to safely make s’mores. […]