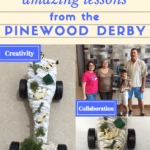 This post about the Pinewood Derby was sponsored by the Boy Scouts of America.  As always, the story and opinions are mine.

It's amazing what you can learn from working with your son on his Pinewood Derby car.  Here's our story of creativity, challenge, and collaboration.

Last year, we asked Grant what kind of Pinewood Derby car he wanted to make.  He said a tornado.  What??  How in the world can we make a tornado Pinewood Derby car?  I'm not quite sure how Grant came up with that idea, but it was creative.

To give you a little background, we have been involved in Cub Scouts since 2009 and participated in our first Pinewood Derby in 2010. With two boys, that's a lot of Pinewood Derby cars over the years.

Want your son to be a Scout? Click the logo to find out how!

From the first year, my husband Scott has told the boys that they need to decide whether they wanted to have a super fast car or a super cool-looking car.  He explained that the fastest cars are usually very plain-looking.

Parker and Grant always chose a cool design.  We “go for design” rather than speed in our family.

We've had a lot of character cars like Lighting McQueen, Sponge Bob, Steve from Minecraft, Bullet Bill, and we've built a few interesting ones like the Geocaching travel bug and an arrow.

But a tornado?  That was a new one for us.

Grant understood that it would be a challenge to design and build and that it might not work well, but he wanted a tornado car.  Good thing Scott, my husband, is an engineer!  🙂

After Grant sketched his idea, he and Scott spent a long time talking about the car.  There were so many challenges to overcome.

I loved watching them collaborate.  It isn't often that they have an opportunity to work on a project that involves creativity and engineering.  What struck me the most was that it truly was a collaboration.  Father and son each contributed to the solution.

After Grant and Scott figured out the basic design and construction, it was time for me to join the team by helping with the design elements.  Grant and I brainstormed (“storm”–unintentional pun! 🙂 ) things that you see in a tornado.  Grant wanted a house, a car, some cows, and a few trees.  We worked together to figure out where we could get tiny versions of these.

Now, I'll admit that I was very skeptical about what a tornado Pinewood Derby car would look like.  But when I saw the finished product, I couldn't believe how great it looked.  My son had taken this idea in his head and turned it into something amazing!

Pinewood Derbies are a family affair. We all go–even Nana comes to town for the big event.  It's my favorite Cub Scout event, and I wrote about how exciting that first Derby was for me.

On the night of the big event, Nana helped Grant carefully pack his car in a plastic shoebox with a cloth in the bottom to keep it from rolling inside the box.

In our pack and district, the boys vote on the car that has the best design.  Some years, simple pop culture cars win, like the year that my other son Parker made a Steve from Minecraft car.

Would the Cub Scouts even recognize that Grant's car was a tornado?  Would they vote for it if they did?  We talked to Grant about this challenge and told him he might not even place in the design competition.

When the final votes were in, our Cubmaster announced that the tornado Pinewood Derby car had won!  Grant's tornado car went on to win best design at our district Pinewood Derby too.

Early on, I tried to talk Grant out of his tornado design.  But his perseverance taught me that collaboration can overcome challenges that stand in the way of your creativity.

If your son isn't a Cub Scout, I encourage you to find out more about the fun he (and your entire family) can have by visiting Be A Scout.

P.S.  You can find Pinewood Derby resources and ideas here!

[…] it's a great learning opportunity. I shared three lessons that the Pinewood Derby taught us–creativity, challenge, and […]

[…] Pinewood Derby is one of those unforgettable experiences in the life of every Cub Scout, and this list of 10 helpful Pinewood Derby books will help your […]

This Mom Wasn't Sure About Her Son's Pinewood Derby Car Design But Then... - The BSA Blog

[…] her recent blog post, Sherry explained, “Early on, I tried to talk Grant out of his tornado […]

[…] her recent blog post, Sherry explained, “Early on, I tried to talk Grant out of his tornado […]