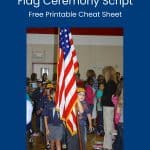 Learn how to conduct a Cub Scout flag ceremony. Free printable cheat sheet script included! This flag ceremony can be used at den and pack meetings.

Holding a Cub Scout flag ceremony is one of the ways that we teach our children patriotism so that they can become good citizens when they're adults. This is one of the biggest benefits of being involved in Cub Scouting.

Both Wolf and Arrow of Light Cub Scouts have adventures that involve a Cub Scout flag ceremony.

Wolf Adventure Council Fire (Duty to Country) 1. With your den or pack, participate in a flag ceremony, and learn how to properly care for and fold the flag.

Arrow of Light Adventure Building a Better World 1. Explain the history of the United States flag. Show how to properly display the flag in public, and help lead a flag ceremony.

When Should We Have a Cub Scout Flag Ceremony?

Sometimes, your den meeting place may not have a flag. When we first joined Cub Scouts, we held our meetings at my house. I bought a small flag like this. That worked well for us. It was small and easy to store.

Other dens use the flag patch that's sewn on the Cub Scout uniform. One Cub Scout would be selected to be the flag. They stood at the front of the room and turned to the side so that the rest of the den could see the flag.

Even though no one carried in the flag, the Scouts still had the opportunity to say the Pledge of Allegiance.

Before the Flag Ceremony

There are a few things that you should do before your Cub Scout flag ceremony.

First, make sure the flag isn't too heavy especially if some of the younger Cubs are carrying it. We purchased these harnesses to use when the Scouts participate in our local Veteran's Day parade. Although I didn't try it during an indoor ceremony, I'll bet they would work to help the younger kids carry the flag during your ceremony.

The second thing you want to do is check the ceiling height. The youth group room at the church where our Boy Scout troop meets has a really low ceiling. And they strung Christmas tree lights from the ceiling. The boys have to be super careful!

We used to conduct a flag ceremony for our elementary school assembly. The school's ceilings in the hall where we gathered and in the gym where the assembly was held are plenty tall. But the doorway to get into the gym wasn't. The Scouts whacked the doorway with the flagpole more than once! ?

Be sure you explain this to the flag bearers so that they'll know how to hold the flag at an angle.

Don't forget to put the flag stands at the front of the room. If they aren't exactly the same size, make sure the one for the American flag goes on the left.

Our troop's flag pole is a different size, and the hole in the stand is smaller than the American flag pole. Not long ago, someone accidentally put the stands on the wrong side. Our Senior Patrol Leader had to switch them before the flag bearer could post the colors.

Finally, make sure the Cubs know the path that they're to take. If you can, having a quick flag ceremony rehearsal will help the kids feel confident as they are presenting our nation's colors.

Sometimes, I worry that we expect our kids to know how to act during a Cub Scout flag ceremony even though we may not have explained it to them. We actually had a fun session on flag etiquette at day camp a couple of summers ago. Read about the flag etiquette games we played.

If we are in uniform, we give the Cub Scout salute. Uniform doesn't just mean our blue or tan shirts. A t-shirt from day camp or our troop t-shirt also counts as a uniform, so make sure you salute when you're wearing those too.

If you're wearing a uniform hat, leave it on even indoors. The exception to this is if you're in a religious institution where custom forbids wearing a hat indoors. This is from the Guide to Awards and Insignia.

If you aren't in uniform, put your hand over your heart. If you're wearing a hat, remove it even if you're outdoors.

The members of the color guard don't salute or say the Pledge if the U.S. flag hasn't been posted yet. This was something I learned when I was doing the research for the flag etiquette games. The reason why is that their job is to protect and guard the flag at all times.

The Ceremonies for Dens and Packs book (link to Kindle edition) gives several examples of introductory remarks that you can use prior to saying the Pledge. These can help us remember the meaning of our Pledge of Allegiance. Here are a few that I especially like:

“Long may it wave. Let us remember the history of our flag as we pledge our allegiance to our flag.”

“Where our flag flies, there is freedom. Join me now in expressing our allegiance to the flag.”

“The red in our flag stands for courage and bravery. Today, as we salute our flag, let us remember the men and women in the armed forces who are serving our country and us.”

Have one of the Cub Scouts serve as the caller or narrator. We found that most Scouts felt more comfortable if an adult was standing near them at the front of the room.

I think it's a good idea for the caller to always have a printed copy of the script even if they have it memorized. Being in front of the audience may make them just nervous enough to forget.

Below you'll find a printable flag ceremony cheat sheet that you can give to your caller. On more than one occasion, we couldn't find our printed script, so we pulled up one on our phone's browser and handed the phone to the caller.

Hint: Bookmark this page on your phone's browser just in case you need it. 🙂

“Color guard, advance. Scout salute.”  Color guard walks to the front of the room and stands near the flag stands. Remember, the color guard members don't salute. The pack flag is lowered a bit so that the U.S. flag is taller.

“Please join me in the Pledge of Allegiance.” Everyone except the color guard says the Pledge.

“Two.” Everyone drops their salute.

“Color guard, post the colors.” Color guards place the flags in the stands and salute the American flag.

“Color guard, dismissed.” Color guard walks to the back of the room.

You may decide to post the colors before saying the Pledge.

Many packs will recite the Scout Oath and Law after the Pledge. Or you can save the Scout Law until your closing ceremony.

If you are going to say the Scout Law, you'll probably want to ask the audience to stand and say it before you bring the color guard to attention.

“Color guard, retire the colors.” Color guard removes the flags and walks toward the back of the room. The American flag is on its “marching right.”

I created this printable for you. It has four copies of the script on each page. You can print the page on card stock, cut them out, and laminate them.

I love my laminating machine! Here's one similar to mine.

I hope this information has been helpful to you!

P.S. Here's a super simple version of the Cub Scout flag ceremony that you might want to check out.

[…] example, I have a blog post about how to conduct a Cub Scout flag ceremony. I created a printable lead magnet that has the ceremony steps listed out. That has been downloaded […]

Hi! Looks like the line "color guards cross" is missing right after the salute in the opening. Is it possible to add it to the Printable Flag Ceremony Cheat Sheet with Instructions? Thanks!

Why is the word "two" on the printable? Thanks.