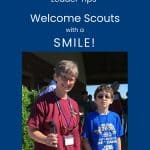 Spotlight on Cub Scout volunteer Betsy Link who has served Scouting in many ways. Welcome Scouts with a smile to start your event off right!

Welcome to Scouter Spotlight where we tell you about an awesome Cub Scout volunteer. This week, we're focusing on Betsy Link.

I am honored to call Betsy one of my best friends. We started as Cub Scout friends when we met at day camp in 2011, but our friendship is far beyond just Scouting now.

Betsy is kind and giving. She's super smart and always willing to share her knowledge. In fact, you'll see her name in many of my posts (especially those about STEM activities) because she's shared information and insights with me.

Betsy is a Supernova mentor, and she invited my son, Grant, to earn both the Cub Scout and Webelos Supernova awards with her den.

Her sons Matthew and Ryan are about the same age as my boys. We've taken all the boys on a couple of excursions. Our biggest adventure was when the six of us plus our friend Beth and her two sons went to the Philmont Training Center together in 2016.

From collector of the day camp archery target hay to Merit Badge counselor, Betsy's husband Andy is an active Scouter too. He's a researcher at a local university and hosted the Cub Scouts working on the Adventures in Science adventure.

Betsy has a wonderful approach to the almost inevitable stress we have just before a Cub Scout event that we've planned. She takes a minute to reflect on what a great experience Scouting is.

Then, she puts on a smile even though she is stressed and worried. That way, people will know she is happy to see them and that they are going to have fun.

I love this tip! I've seen Betsy do this, and you would never know she's worried. When Cub Scouts and adults see her warm and welcoming smile, they know it's going to be a great event. It's a wonderful thing.

What is your pack number? Formerly Pack 223, now Troop 86

(Those are Betsy's current positions. She was a Den Leader (for 2 dens at once!), Pack Committee Chair, and Day Camp Director.)

How long have you been involved in Scouting? 8 years

Were you a Scout growing up? If so, what was your rank? I was a Girl Scout.  I started as a Brownie and ended as a Cadette.

Why did you become a Scout leader?  Our family likes to camp.  My son Matthew went on his first camping trip when he was 9 months old.

So, when he became old enough to be a Cub Scout, I pushed him to try out the program.  He was very hesitant, so I suggested we would do it together.

At our roundup, I waited until one of the other parents volunteered to be the den leader.  Then I said I would help too and be the assistant.  Within a week, more boys had joined, and I wound up with my own den.

I read about Scout leaders who are inspired to help young people in a civic-minded way.  My primary motivation has always been helping my two sons.  I feel I have had a positive impact on hundreds of other boys, but they are not the most important reason why I am a Scout leader.

Sherry's Note: The other boys may not be Betsy's primary motivation, but they have definitely benefited from her work.

How do you think being a Scout benefits your children?

One of my favorite aspects of the BSA programs is the interaction of older and younger Scouts.  When my boys were young Cub Scouts, they would look up to the 5th graders.

Now that they are Boy Scouts, I am really seeing how important the variety of ages is for this program.  When your child starts out as a brand-new Boy Scout, he will get help, advice, and instruction from the older Scouts.  Later he will be responsible for teaching skills himself.

Now that my older son is one of the experienced Scouts, he is taking his turn as a leader in the troop.  He has just finished serving as Assistant Senior Patrol Leader, basically as second in command of the troop.  He has learned skills that many adults are still working on.

He can get in front of a group of 60 people and explain what the next outing will involve.  He can choose activities for a troop meeting and plan how long each will take.  He can identify when he will need help from other Scouts and adults.  He can explain his plan to others so they will be ready to help with the activities.

And, he has turned into a really good cook.  At our recent fishing outing, he was the head cook as the Scouts made paella for 45 people.  There are not many other situations where kids learn to plan and organize substantial projects and lead other people.

A second important benefit of Scouting is the excuse to go camping each month.  My boys have a reason to take a break.  A reason to enjoy the beauty of the world around them.  A reason to spend time with friends.  A chance to learn be self-reliant.  Hopefully, they will still spend time on outdoor adventures when they are adults.

What do you think is the most fun adventure of any ranks? Because most of my time as a Cub Scout leader was under the old program, I am most familiar with the Webelos adventures.

The adventure I thought was surprisingly fun is Aware and Care.  Being sensitive to people with different abilities is not necessarily something that 9 and 10-year-olds jump at, but this adventure involves a series of games that let the Webelos experience what it is like to be different.

What has been the most popular activity that your pack has done?  Indoor rock climbing.  It is expensive, but it attracted a huge crowd and was fun for both kids and adults.  We went the weekend before school resumed after Winter Break.  After weeks of being home from school, everyone was looking for a fun activity.

What is the most unusual activity that you’ve done with your den or pack?  One of the dads in my younger son’s den is a pilot for Southwest Airlines.  He arranged a behind-the-scenes tour at the airport.  We got to go to the control tower, see the operations room where they track planes and get on one of the Southwest planes.  (We didn’t actually get to fly.)

What one piece of advice would you give to a new leader who is just starting out as a Cub Scout leader?  I always worried that if I didn’t do a good job as a leader that families would leave the program.  Right before the event (den meeting, pack meeting, day camp, etc.), I stopped to reflect on what a great experience Scouting is.

I would make sure to smile even though I was stressed and worried so that people would know I was happy to see them and that we were going to have fun.

A HUGE thank you goes out to Betsy for sharing her Scouting story with us!

I hope Betsy's story has been inspiring to you! She is definitely an inspiration for me!