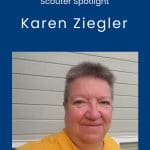 Read about Karen Ziegler, a devoted Scouter for 22 years. She volunteered with her son when he was young, and now, she's helping with her Tiger grandson!

Welcome to Spotlight Saturday where we tell you about an awesome Cub Scout volunteer. This week, we're focusing on Karen Ziegler who's been involved with Scouting for 22 years!

One of the things that impressed me about Karen is that she volunteered when her son was involved in Scouting, and now she's volunteering with her grandson who's a Tiger!

I love seeing grandparents involved. But to be honest, I was a little surprised when I first met grandparents who were day camp directors and Cubmasters. I guess I just thought that only parents would have those roles.

I met a granddad at camp school who was a Scoutmaster. I asked why he was volunteering as a day camp director.

He told me that those Cub Scouts would eventually be the Boy Scouts who join his troop. He wanted to ensure that they had a great time at day camp so that they would want to be Boy Scouts.

Karen's son is an Eagle Scout, and it sounds like he took advantage of some great Scouting opportunities. I'm sure Karen is super proud of him!

Read on and find out more about Karen!

What is your position in Scouting? Pack Cubmaster and Troop Committee Member

How long have you been involved in Scouting? 22 years

Were you a Scout growing up? If so, what was your rank? I was a Campfire Girl.

What are your children's ages and ranks? I have a 28 son who is an Eagle Scout and a grandson who is a Tiger.

Why did you become a Scout leader? To spend time with my son. I love to be involved.

How do you think being a Scout benefits your children? The friendships they make, many who will be lifelong, the trips and adventures they participate in, and the opportunities to learn about so many different things.

The service they learn to give, and learning to be a great citizen of our country and the world. The skills they learn, such as public speaking and leading others in tasks.

My son spoke before a legislative committee to get a bill passed, and he spoke to a large group at our State Capitol for a service project. He took NYLT, was on staff, and then took NYLT training at Philmont. He had the opportunity to be employed by our Scout Camp. So many things he benefitted from!

How many kids do you have in your pack? Currently 15

How many dens of each rank do you have in your pack? 1 of each

What do you think is the most fun adventure of any ranks? Camping–the outdoors, the skills, the camaraderie.

What has been the most popular activity that your pack has done?Resident Camp, day camps, Sky Zone. They learn while having fun. They get physical.

What is one thing that you think your pack does really well? We all get along with each other.

What one piece of advice would you give to a new leader who is just starting out as a Cub Scout leader? Ask questions. People are happy to answer and help you.

A HUGE thank you goes out to Karen for sharing her Scouting story with us!

I hope Karen's story has been inspiring to you! I know it is to me.