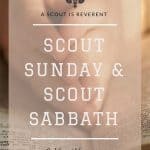 Scout Sunday, Scout Sabbath, and Scout Jumuah are special days for BSA to celebrate Scouts and Scouters. There are many ways to commemorate the day.

Three very special days for the Boy Scouts of America are Scout Sunday, Scout Sabbath, and Scout Jumuah. First observed in 1914, the days honor the contributions of youth and adults to Scouting.

Recently, the National Association of Muslim Americans on Scouting began celebrating Scout Jumuah which honors the contributions of young people and adults to Scouting within the Muslim community.

Celebrating Scout Sunday, Scout Sabbath, and Scout Jumuah can help introduce the Scouting program to congregation members who may not know about it.

Because most Scout units are chartered to faith-based organizations, Scout Sunday, Scout Sabbath, and Scout Jumuah also the Scouts an opportunity to give back by performing acts of service.

Whether with your pack or with your family, commemorating one of these important days will show your Scout spirit to your community.

When is Scout Sunday, Scout Sabbath and Scout Jumuah?

Typically, Scout Sunday is the Sunday before BSA's anniversary which is February 8th. This date is flexible to accommodate the congregation's needs.

For example, the United Methodist Church always celebrates Scout Sunday on the second Sunday in February to avoid conflict with their commemoration of Transfiguration Sunday. An individual church also has the option of celebrating on a different Sunday.

Scout Sabbath is the Saturday following Scout Sunday. Congregations may also choose another Sabbath on which to celebrate Scout Sabbath.

Below are just a few of the ways your pack can celebrate Scout Sunday, Scout Sabbath, or Scout Jumuah.

How to Plan Your Scout Sunday, Scout Sabbath, or Scout Jumuah Celebration

Many congregations charter more than one BSA unit. For example, we have a Cub Scout pack, a Boy Scout troop, a Venturing crew that are chartered to the same congregation.

As early as possible, contact the leaders of the other groups to make joint plans. Often, congregations will host Girl Scout meetings, so include their leaders too. You may want to designate one leader to contact the pastor, rabbi, or imam and report back to the rest of the group.

The first thing you'll want to do when contacting the pastor, rabbi, or imam is to decide on a date for the celebration. If the designated Scout Sunday, Scout Sabbath, or Scout Jumuah dates don't work, choose a date that does.

Ask the pastor, rabbi, or imam how your Scouts may contribute that day. He or she may direct you to meet with someone else. We have met with our chartered organization's worship committee to make our plans.

Offer some suggestions of things your Cub Scouts would like to do. When you have reached agreement on the activities, work with the other Scout groups to ensure that as many Scouts as possible are involved in the celebration.

What has been your favorite Scout Sunday, Scout Sabbath, or Scout Jumuah activity?

P.S. Another February tradition for Cub Scouts is the Blue and Gold banquet.  Click over to get ideas for your banquet.

With covid shutting down our sponsor school. Our church has stopped church services and has switched to zoom church. What are some of my options? We used to collect the offering, greet and hand out bulletins. The scouts also lite the candles. Chris Kuehl Assistant Cub Master

The article currently says that the BSA recommends that scout sunday be on Monday Feb 10th 2020, should probably be Feb 9th

Any one have a scout Sunday ceremony to lol at?

There is also Scout Jumla for Muslim Scouts: https://blog.scoutingmagazine.org/2017/01/09/scout-sunday-2017-scout-sabbath-2017-everything-need-know/

Thanks so much, Jamie! I'll add a link to the post.