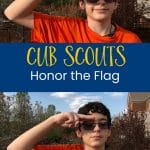 When we think of flag etiquette, we think of things like not letting the flag touch the ground, where the flag should be placed, etc. But before we learn those things, we need to learn how to honor the flag with our behavior, especially during a Cub Scout flag ceremony.

Do your Cub Scouts know how to honor the flag? I'll bet your first response is “yes” because we teach flag etiquette in Cub Scouts.

Typically, flag etiquette focuses on the flag–when to fly it, how to display it, and how to take care of it.

But I believe that's only part of how we should honor the flag. The other part should focus on the Cub Scout and how he or she acts.

Often, these little folks don't know how to salute the flag properly. It's kind of cute the first time we see our youngest Cub Scouts doing the Cub Scout salute with their left hand instead of their right during a den meeting.

But it's not so cute seeing some Wolves or Bears slouching while they're conducting a flag ceremony during a pack meeting or at their school.

Honor the Flag by Standing at Attention

Honor the Flag by Saluting Correctly

After they've learned to stand at attention, our Cub Scouts need to learn how to do the Cub Scout salute.

When to Use the Cub Scout Salute

Note: The official uniform includes pants, belts, socks, etc., and many people say that a Scout isn't “in uniform” unless he's wearing the complete, official uniform. However, BSA's Guide to Awards and Insignia says, “While wearing the uniform is not mandatory, it is highly encouraged.”

You may have heard the terms “Class A uniform” or “Class B uniform.” These aren't official BSA terms, but they're used by many of us in the Scouting community.

A Class A uniform is known as the field uniform. It is the official Cub Scout shirt that has “Boy Scouts of America” embroidered in gold above the right pocket.

A Class B uniform is known as an activity uniform, and it's typically a Scouting-related t-shirt. This can be a pack shirt, a day camp shirt, or something similar.

If a Cub Scout is wearing his or her uniform (either field uniform or activity uniform), they will use the Cub Scout salute.

So, even if a Cub Scout is wearing a scouting t-shirt (like that day camp t-shirt), they are considered to be wearing a uniform and should use the Cub Scout salute.

If they are not wearing a uniform, Cub Scouts will place their hands over their hearts to salute the flag.

This question is sure to have some good debate. But here's the official word from the Guide to Awards and Insignia:

Official headgear may be worn while the unit or individual is participating in an indoor formal ceremony or service duty, except in religious institutions where custom forbids. Typical indoor activities of this type are flag ceremonies, inspections, orderly duty, or ushering service.

This means that unless your religious institution forbids it, Cub Scouts may keep their Cub Scout hat on during the flag ceremony.

If you're wearing a hat from your favorite sports team, you should take it off during the flag ceremony. Remove your hat with your right hand and hold it at your left shoulder so that your right hand is over your heart.

How to Honor the Flag while Participating in a Color Guard

Have you ever seen a little Wolf Cub Scout trying to hold the flagpole (that's twice as tall as he is) and salute the flag at the same time? We're lucky that he or she doesn't drop it!

Did you know that the flag bearer and the members of the Color Guard don't salute the flag or say the pledge?

According to the 2010 printing of BSA's Ceremonies for Dens and Packs book, “the reason the color guards do not participate in saluting, singing, or saying the Pledge of Allegiance with the group is because their job is to guard the flag at all times. They should salute after the U.S. flag is posted.”

Instead, the flag bearer and the members of the Color Guard stand silently at attention during the flag ceremony. They salute the flag after they've posted the colors.

Games to Practice Honoring the Flag

A couple of years ago, we wanted to include a session about how to honor the flag during our Cub Scout day camp. We knew it would be super boring for our Cub Scouts to just practice these skills, so we developed two games to help reinforce the skills they've learned.

Go over standing at attention and saluting the flag before you start the games. After you've spent some time on these skills, the games can be played anytime.

The younger Cubs may need to be reminded, but soon, they'll know exactly how to honor the flag and can play the games without any reminders.

Note: Some Scouts may not know who Baden-Powell is. He is the founder of the Scouting movement. His story is pretty fascinating, so if you're interested, you can read what I wrote about him over on The Spruce.

Similar to Simon Says, this game will allow the Scouts to practice saluting the flag.

You can make this game as short or as long as you want. A den chief, a denner, or a parent can be in charge of the game. After the Scouts have learned how to honor the flag, this game is a great gathering activity!

Ask the Cub Scouts to stand up. Give the following commands for the Scouts to do. For some of them, add “Baden-Powell Says” at the beginning.

Just like Simon Says, the Scouts are out if they do the activity without hearing “Baden-Powell Says” first.

To make the game a little longer, add in some of the typical Simon Says commands such as these:

You can mix it up any way you want, but make sure you're including the flag salute commands several times since those are the skills you want the Cubs to practice.

You could also call this game “Uncle Sam Says” to give it a more patriotic flare.

Are You Patriotic? Game

The theme of our day camp when we first played this was Star Wars, so we called the game “Are You on the Dark Side?”

Two Scouts BSA members demonstrated the skills that the Scouts had learned, but some of the time, they did something incorrectly.

I've created a printable with two patriotic emojis–one is happy, and one is dismayed. One fun way to use these is to cut them out and tape them to a craft stick. You do have a huge box of craft sticks, don't you? 🙂

Enter your email below to get the printable.

If you are doing this at a themed event, you might be able to come up with ideas for images that you can use that match your theme.

Here's how to play.

Give each Scout a copy of the two emojis.  Have a Scouts BSA member, denner, or parent demonstrate the following.

The Cub Scouts will hold up the happy emoji if the Scouts BSA member is correct and the sad emoji if incorrect. If it's wrong, ask the Cub Scouts what they did wrong.

What do you think? Will these games help our kiddos learn how to properly salute the flag? What other games or activities have you done to help our Scouts learn how to honor the flag?

Are you fed up of fake promises and lies that are sold across the web in the name of Economics assignment help? Don’t worry! You won’t need to look further anymore. Civil engineering assignment help? engages industry leading experts and guarantee you non plagiarised original content of high quality only. Moreover, our high distinction rate ensures that our clients need not worry about their grades at all.

Is It Disrespectful To Salute If You’re Not In The Military? – Pietroortolani

[…] What is this? According to the 2010 printing of BSA’s Ceremonies for Dens and Packs book, “the reason the color guards do not participate in saluting, singing, or saying the Pledge of Allegiance with the group is because their job is to guard the flag at all times. They should salute after the U.S. flag is posted.” via […]

Does The Color Guard Salute The Flag? – Sarahjocrawford

Can A Citizen Salute A Soldier? – Almazrestaurant

[…] If a Cub Scout is wearing his or her uniform (either field uniform or activity uniform), they will use the Cub Scout salute. If they are not wearing a uniform, Cub Scouts will place their hands over their hearts to salute the flag. via […]

I am teaching a course at University of Scouting and I hope it is OK if I share web site with them. You have some fantastic ideas and some great games to make learning more enjoyable. Thanks,

I would be honored! Thanks so much!