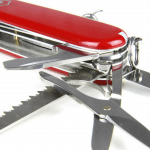 Find out about three designs of pocketknives, a requirement for the Bear Cub Scout adventure Bear Claws. You can also download a FREE printable activity!

Owning a pocketknife is almost a rite of passage for many kids and especially so for Cub Scouts. Many of our Scouts can't wait until they're Bears so that they can earn their Whittling Chip which allows them to carry a pocketknife at pack campouts. However, they must have the permission of their parent and den leader as well as proper adult supervision.

Earning the Whittling Chip is part of the Bear Adventure, Bear Claws. Another Bear Claws requirement is to learn about the three common designs of pocketknives.

There are three common pocketknife designs:  the pen knife, the jack knife the multi-purpose knife. So, what's the difference these three?

The pen knife has hinges and blades on both ends of the knife. Often, they will have two or three blades at each end. They are also smaller than the other two types.

The is only hinged on one end, but it may have more than one blade. Outdoorsmen such as hunters, campers fishermen tend to like these .

The multi-purpose knife is popular because there are so many different things they can have on them.  Obviously, they'll have a knife blade, but they can also have a file, scissors, tweezers, can or bottle openers and even a mini-saw blade.

To help the Scouts learn the types, you can use these printables. Print them on card stock, have the Scouts cut them out and use brads to attach the pieces. The boys can write the pocketknife's type on it.

You can always assemble one set of these to use as an example rather than having the boys make them.

I hope this helps you with the Bear Claws Adventure!

P.S. If you decide that your Scout is ready for their first pocketknife, check out these Swiss Army knives available from REI.

Whittle While You Work – Everyday Grandparents

[…] my Internet travels, I came upon a site that had templates for cutting the three different pocket knives out of paper. You use those little […]

I agree thank you for this information and printouts. We had an incident with a knife that wasn't right. I am going to have my boys memorize the Whittling Chip before they get the card. I want my boys to know a knife is not a toy to take lightly.

Sherry, WE would like to share your link on our College of Cub Scouting this is the "Pow Wow" for the Cub Scout Leaders of the GREAT SALT LAKE COUNCIL. Can we link your blog address to our Resource Library? We are having a Class taught on Whittling and Wood Working and Your Info is "Spot on". Thank you for being an amazing Cub Scouter! Thank you, Cathy Price Dean of College of Cub Scouting 2015 "Adventures for Life"

I would love that! Feel free to link away! :) Thanks so much!

thank you so much for printouts.

You're welcome! Thanks for reading!