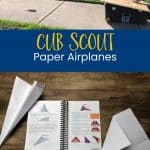 Learn how to make a paper airplane for the Wolf Cub Scout elective adventures, Motor Away and Air of the Wolf. These fun activities could be done at a pack meeting too And Motor Away counts toward the Cub Scout Nova award, Swing!

The Motor Away elective adventure for Wolf Cub Scouts teaches the Scouts about propulsion which means to push forward or drive an object forward.

In this adventure, the kids learn about propulsion by making paper airplanes, model boats, and self-powered cars.

Today, we're going to focus on airplanes. I'm sure all of us have wondered how those huge airplanes can stay in the air. I know I have! ?

That can all be explained by something called Bernoulli's principle which says that as air moves around an object, it creates different amounts of pressure on that object.

To show this, cut a piece of paper into 1″ strips so that each child can have one. Demonstrate holding the paper right below the edge of your bottom lip, then ask them what they think will happen if you blow out a big breath.  It'll be interesting to hear what answers you get.

Next, give a strip to each child, and have them hold it right below their bottom lip and blow out. Ask if they're surprised by what happens.

This is the same principle that keeps an airplane in the air!

Notes:
1. I recommend using a 1″ strip of paper rather than an entire piece of paper because the strip will move more rapidly. It's also a bit easier to move the strip than the entire piece. You could try it with both as you're preparing for the den meeting.

2. The reason I recommend asking them what will happen before you give them the paper is to keep that inquisitive kiddo from blowing before anyone has answered!

The Motor Away adventure doesn't require using the Scientific Method, but it's simple to turn your paper airplane project into an “official” scientific inquiry. I found this document that shows you specifically how to do this.

If your pack offers the Cub Scout Super Nova award program, it makes sense to use the scientific method because it will satisfy one of the Super Nova requirements.

Cub Scout Super Nova Requirement 8: Learn about the scientific method (or scientific process). Discuss this with your mentor, and include a simple demonstration to show what you learned.

Here are the requirements:

Wolf Elective Adventure Motor Away Requirement 1: Do each of the following.

A. Create and fly three different types of paper airplanes. Before launching them, record which one you believe will travel the farthest and what property of the plane leads you to make that prediction.

B. Make a paper airplane catapult. Before launching a plane, record how far you believe it will travel and explain what information you used to make this prediction. After you make your prediction, launch the plane and measure how far it flies.

The Wolf handbook gives instructions for making three types of paper airplanes: the arrow, the delta, and the dart.

But a simple Google search shows you that there are many other types. I found three resources that I think are particularly good.

Fold ‘N Fly – Fold ‘N Fly has 40 different models ranging from those that fly a long distance or stay aloft for a long time to those that are decorative or acrobatic.

The site tells you how difficult the plane is to make and whether or not you'll need to cut the paper using scissors. The site also has an instructional video for each type.

But the thing I like the best is that the site tells you how to throw each style of airplane. Scroll to the bottom of the instruction page, and you'll see a section called “The Throw.”

In addition to online sources, there are lots of paper airplane books available too. Some of them have pages with fold lines printed on them that you simply tear out and fold. Here are some that would be great for our Wolf Cub Scouts

I suspect that there might be a few folks who buy this “for the kids.” Usually, that means the kids just get to watch while mom or dad plays with it!

After you've made your paper airplanes, you need to predict which one will fly the farthest and why. I created a handout that you can use to record your predictions. Simply enter your email below to download it.

If you're doing this part indoors, consider making a runway or landing strip with painter's tape like this one.

Whether you're inside or out, be sure you have a measuring tape so the Scouts will know how far their airplanes flew.

Completing Air of the Wolf Requirement 1A

The Air of the Wolf adventure also has a paper airplane requirement. You can easily complete it while you're working on Motor Away.

Wolf Elective Adventure Air of the Wolf Requirement 1A: Make a paper airplane and fly it five times. Try to make it fly farther by altering its shape. Fly it at least five more times to see if your changes were effective.

All the Wolves need to do for this requirement is to pick one of their airplanes and fly it five times, recording how far it went.

Next, the Wolf should make a change to the shape of their airplane that might make it go faster. Fly the airplane another five times to see if your airplane does go farther.

That's all you need to do to check off this requirement!

Requirement 1B of Motor Away has the Scouts making a paper airplane catapult. The Cub Scouts will also need to predict how far they think their airplane will go using this catapult and why.

Motor Away Wolf Elective Adventure Requirement 1B: Make a paper airplane catapult. Before launching a plane, record how far you believe it will travel and explain what information you used to make this prediction. After you make your prediction, launch the plane and measure how far it flies.

The handbook gives you easy instructions. Simply punch a hole in the underside of your paper airplane with a hole punch and thread a rubber band through the hole.

Put the rubber band over your thumb, pull back on the plane, and let go!

Drive the nails into one end of the wood, about 3″ apart. Put the rubber band over the nails.

Set your wood on a small table or something. I used the trunk my son takes to summer camp.

Note: This trunk is PERFECT for summer camp. It fits right under the cots that are at my council's camp, Boxwell Reservation.

Use something to prop up the side of the wood where the nails are.

Punch a hole in the underside of your plane like you did earlier. Open the paper clip like this, and twist it a bit.

Pull your plane back, let it go, and watch how far it will fly!

We used to have this paper airplane launcher, and we were shocked by how far and how fast those airplanes would go!

When I was researching this article, I found so many fun paper airplane activities. Here are a few that I really loved!

Giant Paper Airplanes – Made out of posterboard, these would be great for younger siblings.

Airplane Cargo Challenge – This is a great STEM activity! See how much cargo you can add to your plane and still make it fly. Just grab a handful of coins and a lot of tape for this activity.

Airplane Golf – Can the kids get their airplanes to land “in the hole?”

Airplane Games and Contests – This one has some great suggestions!

Ultimate Paper Airplane Competition – This competition would be awesome for a pack meeting! There are four rounds, and I absolutely LOVE the clever names that Michael, the author of The Thinker Builder, came up with.

Michael created forms (the score sheet, the round explanations, and competition overview) for the competition, and he'll give them to you free when you sign up for his email newsletter.

I hope you have a great time making and flying your paper airplane! Doing these activities fulfills the first requirement for the Motor Away elective adventure for Wolves.

Did you know that completing the Motor Away adventure also counts to earning the Cub Scout Nova award, Swing!?

Leave a comment to let me know what other fun paper airplane activities you've done.

P.S. Sign up below for more great Cub Scout ideas!

[…] you’re researching fingerprints or making paper airplanes, the time you spend with your Scout is […]

[…] 47. Organize a paper airplane contest – Scholastic has information on holding a competition, but you have to check out this post for folding techniques. […]