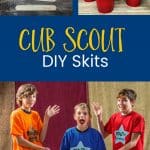 Cub Scout skits are a super fun part of den and pack meetings. But doing the same skits over and over can get boring. Let the Scouts' creativity shine with this fun activity where they create their own skit using prompts written on craft sticks!

Cub Scout skits are a big part of their Scouting experience. According to Boy Scouts of America, “The main purpose of skits is for the boys—and the audience—to have fun. But as boys practice performing in these informal skits, their confidence and leadership skills begin to develop as well.”

One of the biggest fears that many people have is of public speaking. Participating in a Cub Scout skit can help kids start to overcome their fears.

But what skits should you do? A quick internet search will give you lots and lots to choose from. I have a few on my site including these simple campfire skits! ?

You can even buy Scout Skit books like this one!

This is a great book to have in the Kindle version. You don't even have to have a Kindle! Just download the free app. Read more about it here.

Cub Scouts Create Their Own Skits

Instead of searching for one online, why not let the Cub Scouts create their own skits?

When I attended the Fun with Dens and Packs training session at the Philmont Training Center, we were introduced to this super cool activity that will get the kids' imagination working.

Here's how it works:

The skits will be created based on prompts the Scouts choose. Those prompts are written on large craft sticks.

You do have a supply of big craft sticks, don't you?  There are so many things that you can use them for, so keep a supply on hand!

The prompt categories are settings, challenges, characters, and the Scout Law.

Below, you'll find lists of 57 characters, 34 settings, 29 problems or challenges, and the 12 points of the Scout Law.

Before the meeting, write each of these on one craft stick. Be sure that you keep the categories separate.

Store the craft sticks in separate baggies. I would put all of the individual baggies into a larger one so they won't get separated.

Update: In one of the Cub Scout Facebook groups, Mona Stotler shared how her pack used the skits on a stick. She color coded the ends of the sticks for each set of the prompts–characters, settings, challenges, points of the Scout Law. That was so smart! Here's a picture of how she did it.

Each group gets one setting, one challenge, and one point of the Scout Law. Each kid gets a character.

Without seeing what's on the stick, the Scouts will choose their prompts.

Using these conditions, the Scouts create their skit. Give them a set time, maybe 5 or 10 minutes, to come up with their skit and practice it.

At the end of the time, each group performs their skit in front of the other Scouts.

Here are the lists of prompts:

I decided to come up with a skit of my own as an example for you. Here are the sticks that I drew.

The Anteater and the frog are both on all fours and are very close together.

They started pushing and shoving each other because they don't have enough room.

Anteater says, “Hey, get out of my way!”

Frog says, “I paid for my ticket to this football game just like you did, and I was here first! You move.”

Hot dog seller says, “Why are you two arguing?”

Anteater says, “These stands are very crowded, and this frog is taking up all the space!”

They both get mad at him and say, “Hey, why are you telling us what to do? You’re just the hot dog guy.!”

The hot dog seller says, “Because nobody can even watch the football game because you two are fighting so much over how crowded you are.”

“Besides, I’m not always a hot dog guy. I’m just an actor trying to make some extra money by selling hot dogs. You two need to stop fighting immediately. You aren't being very friendly toward each other.”

Anteater and frog look at each other.

Frog says, “I guess we aren't being very friendly.”

Anteater says, “No, we aren't. Let's see if we can figure out this problem.”

Hot dog seller says, “Frog, since you're so much smaller than Anteater, why don't you sit on his back to watch the game?”

Hot dog seller says, “Now, you're being friendly to each other!”

I'm sure the Scouts could come up with something much more clever than that, but I hope it gives you an idea of how the kids will come up with a skit using these prompts.

Costumes and props are great additions to skits!

If you don't have one already, start a costumes and props collection. Some costume ideas are:

Let your pack know that you're collecting things for your collection so they can donate to it.

Garage sales and thrift stores are great places to find costumes and props for your Cub Scout skits. I have a Goodwill Outlet store close to me where you pay per pound. I find craft supplies there too!

I hope you'll try this activity the next time you need some Cub Scout skits. Leave a comment to let me know the most creative skit your Cub Scouts come up with!

Is there a way to get a copy of this to my email? This is an amazing plan!

[…] ceremony! But, I am not sure that BSA would approve it because of the real arrows. The original skit called for the archers to be Cub Scouts, and I know that isn't allowed since this is not a district […]

[…] 39. Have a Cub Scout theater night – Have the Scouts bring costumes and props to the event. Give them a little time to create and practice an original skit with their den.  Then have all the dens perform. Check out this idea for DIY Cub Scout skits. […]

[…] Skits, Jokes, and Run-Ons – Assign each den something to do during the pack meeting. The dens responsible for skits might want to create a DIY Cub Scout skit. […]