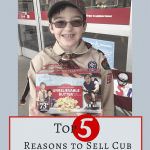 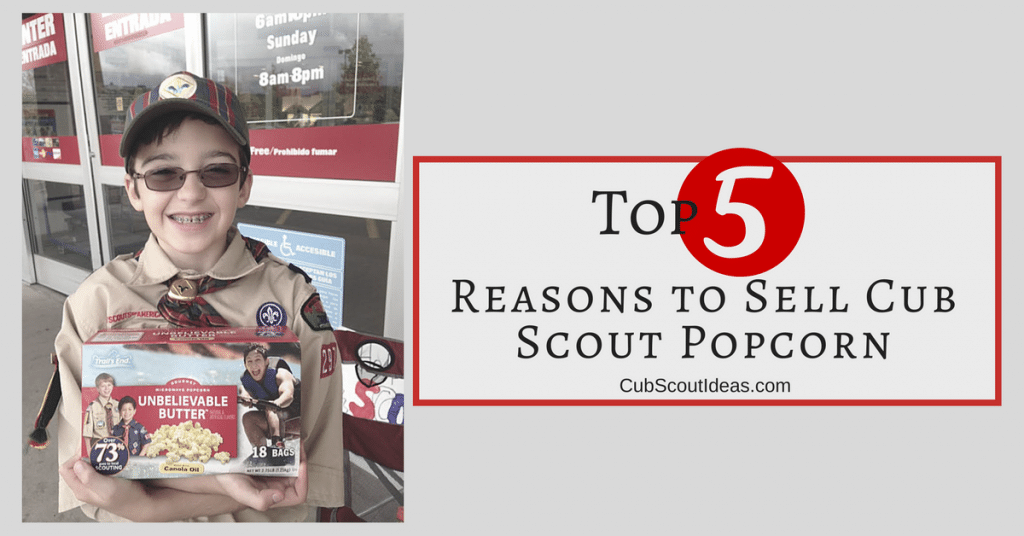 Selling Cub Scout popcorn is a great way for a pack to earn money for its activities while teaching the boys that we earn our own way. Now, I know some people don't like to sell popcorn for a variety of reasons. But your son can practice some valuable skills during your pack's popcorn sale.
Recently, we had a “show and sell” event where we set up a table at Lowe's and sold popcorn to people coming in and out of the store.

During our shift, I started thinking about what Grant was learning through this process, and I realized that there are some great lessons to be learned by selling Cub Scout popcorn.

The Scouts would love dressing up in this popcorn costume for the show and sell!

Most packs usually give prizes to kids depending on how much Cub Scout popcorn they sell. The prize your child wants can be their goal.  Just make sure that it is something that they pick out by themselves.

Your Cub Scout might not make the goal, but I'll bet they work hard at trying to!

2. Persuasion Skills – Because the popcorn is a bit on the expensive side, a Cub Scout has to be persuasive. In our pack, the Scouts are taught to say, “Would you like to support Scouting by buying some popcorn?”

They're selling support of a great organization–not just some popcorn. I admit, I was skeptical of this approach at first, but it works.

My Scout learned little tricks like telling people that our best seller is the caramel corn and that the best value is the microwave popcorn. Grant also figured out that the bag of premium caramel corn has twice as many ounces as the regular caramel corn, but “it has a special treat–pecans, almonds, and cashews.”

Part of being persuasive is overcoming objections. When someone tells Grant that they don't have any cash, he tells them that we can take debit and credit cards through our Square account.

If they don't eat popcorn, he asks them to make a military donation. When they say it's expensive, he tells them that over 70% of the price stays in our area to support local scouting.

Even if your Scout doesn't grow up to be a salesperson, persuasion skills are necessary for almost every job.

3. Handling Rejection Skills – Yep, those little Scouts are going to be turned down. They will knock on doors where no one is home. Sometimes at show and sells, they're going to be ignored.

(Side note: This is a huge pet peeve of mine. If a young Scout is trying to sell you something that you don't want, just say “no.” Don't walk past them without even acknowledging them.)

So, they will get a lot of practice handling rejection. When we don't sell much Cub Scout popcorn, Grant will say, “It's a slow night,” but he usually doesn't complain about it. I think that's because he's been told no many times before, so he realizes that getting upset doesn't change anything.

4. Perseverance Skills – Selling popcorn is a huge lesson in perseverance. If you don't sell at this house, you just go on to the next house. If that person leaving the store doesn't stop and buy, you just ask the next person. Being tenacious is important–it's what gets you through big school projects and big work projects.

5. Math Skills – Oh, my! There are so many ways to practice math with your Scout during the popcorn sale! Here are just a few of the calculations he can do:

You may have to walk them through some of these, especially if they're a younger Scout. Not only are they practicing math, they are also seeing how we use math in everyday life.

I love that selling Cub Scout popcorn is helping my son learn some great life skills!

What has your Cub Scout learned through selling popcorn?

P.S.  Want to read about some fun popcorn games that are perfect for a pack meeting?  Click on over and check them out!

Sharing this on our Pack's Facebook page! Great article!

Hi, I am a den leader for my son's Webelos den. I started last year as a bear leader, I was a scout myself when I was young but it was in another country and although I just was there about a year it left me with some great memories. Anyway I just wanted to thank you for everything that you post on your page, it's been really helpful when it comes to help run den meetings. Also I wanted to ask a suggestion for the pack big trip at the end of the next semester, we have been to a aquarium and a zoo, but i really don't know of another place where we can go what are your suggestion on what to look for for a big trip with the boys and their families

Ahh the pop corn sales is an embarrassment. Highly over priced. Nothing like seeing the sticker shock on people faces . Better off selling g for normal price with option asking for donation.. bet you can sell ten fold more equaling or greater sales than at these current sales tatics. Almost like the people overseeing this never worked in business