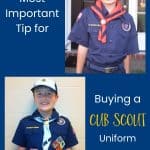 There is one very important tip to remember when buying a Cub Scout uniform. Make sure you know what it is before you purchase your child's new uniform!

When your child joins Cub Scouts, there are several things you'll need to do. One of them is to purchase a Cub Scout uniform for him or her.

If you're like me, you thought you would buy a shirt that fits your child right then. But that isn't the right approach! 🙂

A friend gave me the most important tip before I bought my oldest son’s first Cub Scout uniform.

Your child will be wearing their blue Cub Scout uniform shirt from first through third grade. In fourth grade, they switch to a brown Webelos uniform.

Kids, especially boys, grow a lot from the beginning of first grade to the end of third grade, so unless you want to buy a second blue shirt, buy a big shirt.

Even if that shirt comes down to his or her knees right now, don't be tempted to buy a smaller size!

As you can see, we barely made it!  The buttonholes were stretching a bit, but with only a few weeks of the Scouting year left, I couldn't justify buying a new blue shirt.

Where to Buy Cub Scout Uniforms

There are many places to purchase a new or gently used Cub Scout uniform.

Your local Scout Shop – I'm fortunate that I live close to a Council office where there is a Scout Shop.  Because the Council covers a large geographic area, there are two satellite Scout Shops.

Note: Before you head off to a satellite Shop, check their hours.  One of our stores is only open in the afternoon which I found out the hard way by dropping by in the morning!

Scout Stuff – This is the official retail website of the BSA.

Have you bought your Cub Scout's uniform yet?

P.S. Did you know that you can purchase electronic copies of the Cub Scout handbooks?

My three sons did fine in their shirts without buying it extremely large. It was a touch large when we got them in first and fit all the years. Just depends! No matter what..you don’t want to have to buys a second shirt at $45 each!

[…] Most Important Tip for Buying a Cub Scout Uniform […]

Scout Leader training has just changed uniforms for fourth graders back to the blue shirt and pants again.

I thought I bought my son's big. I didn't realize how much he'd grow! He's just going into a Wolf den and I fear he'll need a new one by Blue and Gold time! My tip would be "buy even bigger than you think", lol!

That's funny! And true for so many boys.