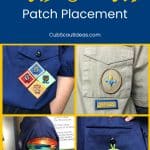 Updated to include the Lion rank patch, this ultimate guide to Cub Scout patch placement will show you exactly where the patches go. Simple diagrams help put all those badges in the right places.

Cub Scout patch placement can be very confusing–especially for a new Cub Scout family. In this article, we'll cover the basic Cub Scout patches and badges so that you can get your child's uniform ready for their first Cub Scout meeting!

This post will walk you through the Cub Scout insignia placement. If you prefer to watch a video, keep scrolling!

Check out the easiest way ever to sew on Cub Scout patches!

If you aren't a seamstress, consider using Badge Magic!  It's an easy, no-sew, no-iron solution for those Cub Scout badges.

Let's start with the left sleeve. Your Council shoulder emblem goes at the very top along the shoulder seam. It is shown as position 1 on the diagram above.

Just below the Council shoulder emblem at position 2a is where the small Veteran Unit Emblem is worn if you use it. It is for units (in our case, packs) that have been chartered at least 25 years.

The number on the emblem represents how many years your unit has been chartered. Wouldn't it be great to be in a unit chartered 50 or 60 years ago?

Next, in position 2 above, is your pack number. Our pack number is 3 digits, but yours could be more or less than that.

A little hint if you're sewing…  Sew the numbers together first then sew the connected numbers onto the uniform.  MUCH easier than sewing each number individually onto the shirt!

The American flag is sewn on the right sleeve of the Cub Scout uniform at position 1. If you purchase your uniform new, the flag will be sewn on already. If your uniform is used, the flag may have been removed, but you can buy another one from your Council.

Directly below the American flag in position 2 is your den number. In our pack, a Tiger den is given a number when it is formed, and that number stays the same for that group of Cub Scouts.

For example, when my son was a Tiger, his den was numbered Den 3. When he became a Webelos, he was still in Den 3.

When you leave the den numbers the same each year, you don't have to replace the patch.

Your pack's most recently earned Journey to Excellence (JTE) patch is worn below the den number on the right sleeve at position 3.

The badges of rank go on the left pocket as shown in the image above. They are placed in this order:

Lions, our newest Cub Scout rank, wear a t-shirt instead of the blue Cub Scout uniform shirt. When the kindergarteners complete all of the requirements for their rank, they can wear the Lion patch over their hearts on the t-shirt.

When the Lions move up to be Tigers, they will put their Lion patch below the left pocket right under where the Tiger badge will go.

Religious knots indicating a Cub Scout has earned the Religious Emblem for their religion are worn centered above the left pocket.

If your Scout earns the Recruiter patch, it is worn directly below the right pocket.

Temporary patches can be worn on the right pocket. These include patches earned for participating in an activity or for completing an achievement.

The picture above shows a Cub Scout day camp patch. Only one temporary patch can be worn on the pocket at a time.

Some other examples of temporary patches are:

Many temporary patches have loops attached so that you can hang them from the pocket button instead of having to sew them on. Makes life so much easier!

According to page 28 of the Guide to Awards and Insignia, the Whittling Chip badge isn't worn on the Cub Scout uniform.

Read this article for some ideas on what to do with those temporary Cub Scout patches when you put a new one on your child's uniform.

Webelos and Arrows of Light wear the tan uniform shirt like Boy Scouts. When the Scouts earn their Webelos rank, they will wear the badge sewn onto the left pocket.

The Arrow of Light rank patch goes directly below the left pocket. It is the only Cub Scout badge that may be worn on the Boy Scout uniform.

If you would rather watch a video, click below!

How Do You Attach Scout Patches?

Unfortunately, Cub Scout patches are not iron on. They'll need to be sewn on with either a sewing machine or by hand. I discovered this super easy way to hand sew them.

And that's where all the patches go! If this was helpful, please share it with your Cub Scouting friends.

P.S.  Get uniform shirts and accessories at great prices from eBay!

Not only do I love collecting patches of all kinds, but I also love sewing on cub scout patch , so I really enjoyed this article. This article not only introduces what a patch is, but also tells us how to make a patch, this article helped me a lot, thank you very much!