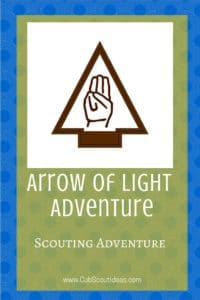 The Webelos Den Leader guide says, “This Arrow of Light adventure will provide Scouts with an introduction to Boy Scouting, Scout skills, and Scout spirit.  Webelos Scouts will attend a troop meeting and accompany a troop on a campout or an outdoor activity.”

Read on to discover this adventure’s requirements and fun ways to complete them!

What are the Cub Scout Whittling Chip Requirements?

Earning the Cub Scout Whittling Chip is a rite of passage for Bear Scouts as they learn pocketknife safety! See all the Whittling Chip requirements here.

Read More about What are the Cub Scout Whittling Chip Requirements?

These knot tying games are great to teach kiddos how to tie knots. Use them for Cub Scout den & pack meetings as well as gathering activities.

Pocketknife safety is important for Cub Scouts to learn. A requirement for the Cub Scout Whittling Chip, it’s also just good information for them to know.

Scouting and knot tying go together. Use some of these free resources to help your Cub Scouts learn how to tie scouting knots.

These cool printable Cub Scout cards are great for helping your Scouts learn the Scout Oath & Law, the Cub Scout Motto, and more.

Learning the Scout Oath and Law is much easier when it’s a game! Check out how Quizlet, a free tool, can help.