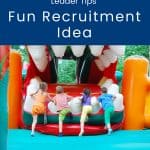 Welcome to Scouter Spotlight where every Saturday, we tell you about an awesome Cub Scout volunteer! This week, I'm honored to tell you about Beth Utiger. Beth is one of my best friends, but I would have never met her if we weren't involved in Scouting.

Beth and I met several years ago while working on Cub Scout day camp. Beth's son Christopher was a Wolf when we first met.

Beth's entire family helped out at day camp. Her husband Tom picked up supplies that we needed and brought us dinner. His wit made us laugh when we were ready to quit.

Her daughter Jane kept our headquarters organized. I don't think I've ever met someone who's as organized as Jane is.

Her son Daniel helped with several of our sessions. And he taught me how to get a rope through a long piece of PVC pipe! (You tie an ink pen onto one end of the rope then drop it down the pipe.)

Beth is a dedicated Scout volunteer, so I'm excited to share a bit about her experience with you today.

Before I share Beth's interview, I wanted to tell you about an awesome recruitment event that her pack does.

At the end of the school year, Beth's pack hosts a fun day with inflatables and activities. The Scouts are encouraged to bring their friends. This gives the friends a chance to see what Scouting is all about.

I love that idea!  If you have events during the summer, give the Scouts your pack's schedule. Be sure to collect names and contact information so that you can invite them to your signup night.

What is your pack number? Pack 417

How long have you been involved in Scouting? Five years

Were you a Scout growing up? If so, what was your rank?  I was involved with Brownies and Girl Scouts. I was active through Juniors.

What are your children's ages and ranks? My son is 10 years old and just crossed over to Boy Scouts.

Why did you become a Scout leader? I initially became a Scout leader because the Pack asked my husband to lead the Tiger den, and with all of his work travel, we needed to co-lead. I was hooked after seeing the impact of Scouting on all of the boys in the den. I took on Committee Chair, went to Wood Badge, participated as a trainer on the District Training Committee, went to Camp School and directed Day Camp, and served as Cub Scout Roundtable Commissioner among other duties.

How do you think being a Scout benefits your children? I have seen so many positives from my son participating in Scouting. He has a great sense of self-esteem that was not there when we started.

He has a respect for his country and his community. He has grown as a person and is actively learning how to help others. Community service opportunities are an important part of participating in Scouting.

How many kids do you have in your pack? There are on average around 80 kids in our pack.

How many dens of each rank do you have in your pack? There were 2 dens that were 5th grade Arrow of Light. All of the other ranks opted to stay with one den per rank and had larger meetings.

We all had fun layering liquids, watching color spread in milk, playing with ink, etc. It was an adventure where all of the boys were able to actively participate, and there were cool reactions to see at every turn. Science is fun!

What has been the most popular activity that your pack has done? Aside from the usual Raingutter Regatta and Pinewood Derby, our pack holds a fun day annually to close out the year. There are inflatables and games, and the scouts are encouraged to bring a friend to introduce to scouting.

What is the most unusual activity that you’ve done with your den or pack? Our den was fortunate enough to tour the General Motors plant and see cars being made on the assembly lines. What a great way to experience the Robotics adventure as a Bear.

What is one thing that you think your pack does really well? My pack is fantastic about making the pack meetings fun.

Instead of spending significant time on awards each month, awards are generally given out at the den level (aside from rank, Supernova, Religious, and any other large achievement). With such a large number of kids in the pack, fun activities are usually done in a round robin fashion.

What one piece of advice would you give to a new leader who is just starting out as a Cub Scout leader? My advice to a new leader is to keep it simple. The den leader guide is a fabulous resource to get you started. Once you have your feet wet, you can start expanding what you do and have fun!

A HUGE thank you goes out to Beth for sharing her Scouting story with us!

I hope Beth's story has been inspiring to you! I know it is to me.