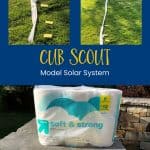 This is a super fun way to make a model solar system uses toilet paper to show the distance between the planets.

The Webelos and Arrow of Light elective adventure, Adventures in Science, has been retired but there are still great activities to help your Cub Scout learn more about science. One activity is to have the Cub Scouts build a model solar system. With this fun activity, they can start to understand just how massive our solar system is.

The Cub Scouts will be building their model solar system out of toilet paper! I know you'll get some chuckles when you tell them this.

How to Build a Model Solar System from Toilet Paper

First, talk about the planets with the kids. Ask if they can name all of our planets. Here they are in order of distance from the sun:

(I know, I know. Pluto isn't technically a real planet anymore, but it was when I was in school, so I'm including it! You can leave it out of the activity if you think it'll confuse the Scouts.)

Ask if they know how big our solar system is. Explain that they'll learn about it today.

Give the kids 10 index cards–one for each planet plus one for the sun. They'll only need 8 if you leave out Pluto.

Have them write the name of a planet on a card plus the distance (in kilometers) from the sun.

To help the Scouts learn more about the planets, you could add these activities:

Ask your Scouts if one of them could walk the 58 million kilometers from the sun to Mercury. Since that's impossible, they will need to use a “scale model” to show the distance between planets.

A scale model is a representation or copy of an object that is larger or smaller than the actual object. In this case, we're using a scale model to represent the distance to planets from the sun.

For our model, we're going to pretend that one square of toilet paper represents 10 million kilometers.

I've created a worksheet that you can use for this activity. It has the planets, the kilometers from the sun (which I got from this NASA resource) and a place to record the number of toilet paper squares needed. Just enter your email below to download it!

The Scouts will need to calculate how many squares of toilet paper they need for each planet. They can use one of these two methods:

If you want, you can round to a whole number. So, Mercury would be 6 toilet paper squares from the sun.

After the kids have calculated the distances for all the planets, have them record the number of squares needed on each of the index cards.

Head outside to create your solar system. You'll need a long space. We ran out of room in our backyard!

Another Scout holds the roll and slowly walks backward while the toilet paper unrolls. The other Scouts walk along and count the number of squares as they unroll. If it's windy at all, you'll need some rocks to help hold down the toilet paper.,

When the sixth square has unrolled, place the Mercury card on the ground next to that sixth square. If you have enough Scouts, ask one of them to stay there and help hold down the toilet paper.

Venus is 11 toilet paper squares from the sun. The Scouts will continue unrolling the paper until they get to the eleventh square where they'll place the Venus card.

Continue this way until you get to the pseudo-planet Pluto which will be 590 squares away!

Note: You may want to have the Scouts calculate how many squares are between each planet. For example, if Mercury is 6 squares away from the sun and Venus is 11 squares away, the distance between Mercury and Venus is 5 squares. This might keep the kids from having to start from the beginning when they get to Uranus!

Another fun option for this activity would be to have the Webelos or Arrows of Light hold these inflatable planets instead of using the index cards.

Importance of Making a Model in Science

The last part of this activity is to explain the value of making a model in science. This website does a great job of explaining it.

My biggest takeaway is that a model helps us understand something that we can't experience on our own. We can't go to Pluto to understand how far apart our planets are. But by using our model, we can get a sense of how vast the universe is.

What do you think? Will your Cub Scouts enjoy this toilet paper solar system model?