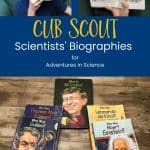 This resource has great ideas of scientists' biographies your Scouts can read. The list is great for all kids–not just Cub Scouts!

The Webelos and Arrow of Light elective adventure, Adventures in Science, has been retired but there are still great opportunities for your Cub Scouts to explore various branches of science. One way is to read a scientist's biography and share his or her work and why it's important.

My good friend Betsy, who was Grant's Supernova mentor, told me that she thinks a scientist learns new things or creates new technology. When my son worked on this requirement, he chose to read about Steve Jobs.

But Grant took forever to decide which scientist to read about! That's why I wanted to share this list with you. Hopefully, your Cub Scout will make a decision more quickly than Grant did.

Amazon has a list of its Bestsellers in Children's Science Biographies. As I was looking through it, I realized that many of the books are part of the “Who Was” series. I stopped by my local library to grab a few of them to check out.

These easy-to-read scientists' biographies will hold the attention of even the most reluctant reader. There are about eighty illustrations in each book.

Even though they're easy to read, these books have a lot of information. One thing I like is that they have “sidebars” with information that goes beyond the story of the scientist's life.

I have to admit that I didn't really understand the Theory of Relativity until I read the sidebar in Albert Einstein's book. Makes so much sense now!

Here are some of the titles of the scientists' biographies that your Cub Scouts might want to check out.

Scientists in the “Who Was” Series

These aren't the only scientists that our Cub Scouts may want to learn about. The Famous Scientists website has a list of their top 100 most popular ones.

We've all heard of the scientists that I listed above, but most of us didn't know anything about Dorothy Vaughan, Mary Jackson, Katherine Johnson, and Christine Darden until the movie Hidden Figures was released.

The book on which the movie was based has a children's version for grades 3-7 which would be great for our Cub Scouts. If you have younger children, this version tells their story in a picture book format.

If you haven't seen the movie, stop reading this and go watch it now! ? Seriously, it was one of the most inspiring movies I've seen in a long time.

Both of my boys enjoyed it, too. Common Sense Media says it's great for kids ages 10 and up, but I think it's appropriate for younger kids, too.

I hope this post has given you some good ideas to help your Cub Scout pick out the biography he or she wants to read. Let me know what scientist they picked!