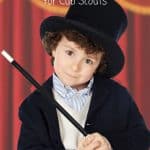 A magic trick can be hard for little Tiger Cub Scouts to do. Here's a super simple one for them to learn using nothing but a length of rope.

The Tiger elective adventure, Curiosity, Intrigue and Magical Mysteries, has the Scout learning a magic trick and practicing it so that he can perform it in front of an audience. For our little first grade Tigers, this might be a challenge because many magic tricks involve having good fine motor skills.

Some of our Scouts are still developing those fine motor skills. I'm sure that some of the Scouts would get frustrated trying to do a magic trick that they simply don't have the skills to do yet. So, they need an easy alternative.

My son Parker did this magic trick with rope when he was a Wolf or a Bear. He tied a knot in the rope without letting go of either end! It was simple to do, but it impressed all of his buddies in the den.

All you need for the trick is a length of rope. We used cotton clothesline rope similar to this.

Here's how it works. The Cub Scout will hold up a rope with his hands at either end. He will ask his audience if they think he can tie a knot in the rope without letting go of either end.  If your son is outgoing, he can really “ham” it up.

He could say, “I will not let go of either end of this rope when I tie the knot in it. Do you think I can do it?” A dramatic pause will give his audience an opportunity to respond. After asking, “Are you ready for my big magic trick?”, he will proceed to do the trick.

Holding tightly to each end, he will then uncross his arms. And magically, a knot will appear in the rope!

Make sure your Cub Scout gives a big “Ta-Da!” to show off his magical skill and takes a bow during the applause!

I recruited my son Grant to show you exactly how this magic trick is done. He just didn't want his face in the video! 🙂

Even though this is a magic trick, it's a great opportunity to talk about knots.  You can tell the Scouts that the knot that was made is called an overhand knot.

The overhand knot is used in several other knots, including the square knot. When the Scouts are Wolves and are working on the Call of the Wild adventure, they will have to show how to tie an overhand knot and a square knot.

In fact, if you are a Wolf den leader, you can do this magic trick at a den meeting as an introduction to knot-tying.

Tigers aren't required to tie knots for any adventures, but knots can be a great gathering activity. At Cub Scout day camp, we have Ziploc bags with rope and knot tying cards in them. Whenever they had a few extra minutes, the Scouts grabbed a bag and practiced.

I've compiled a list of knot tying resources that you can use as you're teaching the Scouts.

So what do you think? Will your Cub Scouts enjoy seeing this cool magic rope trick? Let me know in the comments below.

P.S. This knot tying mug made me laugh! It would be a great gift for a den leader or Cubmaster–especially one who hasn't mastered tying knots yet! Check out the reviews!

[…] the Tiger Cub Scouts learn and practice their magic tricks for the Curiosity, Intrigue, and Magical Mysteries adventure, take them to a nursing home so they […]

Thanks for the tips! Great work!

I like it. Thanks for all of your great posts.

Cute! That reminds me of the dollar bill folding trick, where you turn Washington on his head!

What a nifty trick! My son will love this ? Thank you for all of your hard work and the amazing ideas you bring to this site! They are appreciated!