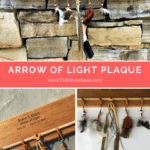 This post was sponsored by Vince's Arrows, but the opinions, as always, are my own.

A couple of years ago, I discovered Vince's Arrows and purchased them for my older son's den. I loved them so much that I asked Vince if he would like to work with me to get the word out to you about them.

So I didn't hesitate when Vince asked me to tell you about his personalized Arrow of Light plaques.  He created one for my son so I could take a look at it.

As I removed the plaque from the wrapping, I was surprised to see that the plaque wasn't smooth like others that I've seen. The wood is rough cut.  My immediate reaction was “well, that's different.” I wasn't sure if I liked it or not, and I put it on my counter so I could see it every time I walked past it.

The more I looked, the more I realized how much I love it.  The rugged look complements the uniqueness of the handmade arrow that's attached, giving you a one-of-a-kind award for your son.

In a way, that's how I see Arrow of Light aged Scouts. They're rugged–they've accomplished a lot during their tenure in Cub Scouts, but they're still rough. As they work toward their Eagle rank in Boy Scouts, they mature and those rough edges are smoothed out.

The Arrow of Light plaque is 32″ long and is made from rough-cut cedar planks. Some people can look at a piece of wood and tell you what kind it is, but I'm not one of them. But when I turned the plaque over to look at the back, my first thought was, “I wonder if this is cedar.” So, I did what any Southern female who owns a cedar chest would do–I smelled the wood. 🙂  There was a faint whiff of cedar, so you know it's the real deal.

When you buy a plaque from Vince, one of his handmade arrows is included and is attached to the plaque with leather loops. Read my review to find out more about these beautiful Arrow of Light arrows.

Five groups of feathers hang from the shaft of the arrow. The middle group consists of an eagle feather and two pheasant feathers, attached with leather strips. The grouping also has a blue and a gold ribbon attached.

The other groups each have three smaller “fluffy” feathers that vary in type and color. The leather strips that hold these have three beads each for a total of twelve. There are two different bead sets, a red, white and blue set and a green, khaki and red set.

Vince can laser engrave your Arrow of Light plaque to personalize it. I had my son's name, pack number, and date of the ceremony added along with the words “Arrow of Light.” I thought that the font size was a bit small, but if you request it, Vince can increase the size.

If you want something other than name, pack number, and date, Vince will add it at no additional charge. The engraving can only be done on the top half of the plaque, so keep that in mind if you want a larger font size or additional words.

My son, Grant, loved the plaque that Vince crafted for him. He told me that he likes it better than his older brother's plaque. When I asked why, he said, “I like the feathers. They're really cool!” They're more than just cool–they have symbolic meaning too.

The three large feathers represent the three parts of the Scout Oath–duty to God and country, duty to others and duty to self. The twelve beads attached to the smaller feathers symbolize the twelve points of the Scout Law.

Green, khaki, and red are the color of the Boy Scouts, so the sets of these beads represent the Scouts‘ cross over from Cub Scouts into Boy Scouts. The two sets of red, white and blue beads symbolize good citizenship that the Scouts learn about and practice during their Scouting career.

The arrowhead is a symbol of integrity. Just as an arrowhead is meticulously crafted and carefully maintained, the Scout must continue to build upon and preserve his integrity. The shaft of the arrow is constructed to fly straight and true. It symbolizes the strength and character the Scout has developed and will continue to develop.

Each Arrow of Light plaque is unique–from the feathers to the arrowhead to the knots in the wood. They are a beautiful reminder of your son's achievement in earning the highest rank in Cub Scouts.

Let me know what your son thinks about his Arrow of Light plaque from Vince's Arrows.

P.S. If your Scout hasn't reached the Arrow of Light age yet, share this with the Webelos Arrow of Light parents in your pack so they can order a plaque for their Scout.

Can you let me know what the process is to work with you for a review of scouting plaques? I have two products that I would be interested in sending to you for review and possible BLOG post.