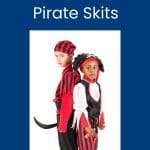 Ahoy, mateys! Need some fun pirate skits for your Cub Scouts? Check out these scripts for 7 skits and audience participation stories.

Why do Cub Scouts have skits? The primary reason is for the Scouts and the audience to have fun! And these 7 pirate skits will definitely entertain the kids!

You can use these skits for den meetings, pack meetings, campouts, or Cub Scout day camp.

First, you'll need some props for your pirate skits. Some of these can be made as a gathering activity.

Eye Patch: Every pirate needs an eye patch, don't they? Check these out.

Eye patches can also be easily made from black foam or black construction paper and elastic cord. Paging Supermom has a template you can print out.

Pirate Spyglass: It's super simple to make a spyglass from a paper towel tube. Check out the instructions here.

If you would rather buy them, here's a good option.

These tubular bandana face shields can be used for so many different things–not just as a prop for a skit. Check out this video that shows you how they can be used.

When my boys saw this video, their immediate response was, “I want one!” Grant wears his around  neck all the time.

This video shows you how to make the do-rag for your pirate skits with the SA Face Shields.

Check out these simple campfire skits!

Now that you have all your props, read on for the pirate skits!

The characters are the Captain, his dog named “Daplank,” and at least 2 pirates.

For this skit, you'll need a “plank.” You can use an actual board or just pretend you have one.

The plank is off to one side. The Captain stands in the middle of the stage and pretends to steer the boat. His dog sits several feet behind him on all fours. The pirates walk up to the Captain from the side opposite of the plank.

When the pirates walk the plank, they can squat down to mimic falling off of it.

This skit needs a narrator and 2 Cub Scouts.

The narrator stands in the middle with the two Cub Scouts facing each other at opposite ends of the room.

For this skit, you'll need several pirates, one Cub Scout in uniform, and a narrator. If the Cub Scouts are young, your den chief or den leader can serve as the narrator.

A group of pirates are standing around a raft or pirate ship. If you don't have anything to use as a ship, just pretend.

A Cub Scout in uniform is hidden behind the group. The narrator stands to the side and reads the lines the Scouts act in pantomime.

Narrator:
Here are some pirates, big, brave and bold,
You’ve heard many times their story told.

They sail the their handmade raft,
Listen now, and you’ll hear them laugh.

Narrator:
Now we’ll sneak in closer, and what do we see?
They seem to be happy…listen to their glee.

Pirates laugh again, and say “aaarrrr” and “ahoy, matey.” The Cub Scout walks forward and stands in middle of the pirates.

One of the pirates takes off Cub’s neckerchief and holds it up as if they're thinking about blindfolding the Scout.

Narrator:
Wait just a minute… something’s not right;
Look at that Cub Scout. There’s no sign of fright!

Cub Scout smiles broadly. The Scout shakes hands with some of the pirates, using the Cub Scout handshake.

Narrator:
What we see here leaves us no doubts,
Our Cub is inviting the pirates to be Scouts.

Cub pulls a piece of paper and pencil out of their pocket and pretends to write down names.

Narrator:
So with this happy ending, we’ll drift out of sight.
For our brave Cub, this was a happy night.

This skit needs one captain and two pirates. The captain can be a Cub Scout or a leader.

Mate #1: Ahoy, Cap’n Brown Beard.
Captain: Where are me pirate recruits, mate?
Mate #1: Ain’t got any, Cap’n.
Captain: What? Ye ain’t got none? Ain’t there anyone around?
Mate #1: Yay, Cap’n, there are blokes around?
Captain: Ain’t they brave enough
Mate #2: These blokes are plenty brave.
Captain: Ain’t they agile enough to climb the main mast?
Mate #1: Cap’n, is agile enough.
Captain: They afraid of the high seas?
Mate #2: Nay, Cap’n, they ain’t afraid of the high seas.
Captain: Can’t they learn new things?
Mate #1: These blokes are smart enough to learn, Cap’n.
Captain: If these here blokes are brave, agile, not afraid and smart enough, how come you Buccaneers don’t have recruits!?
Mate #2: Well, Cap’n Brown Beard, they is all you say but, they ain’t …ain’t
Captain: Well mate, spit it out, what ain’t they?
Mates #1 & 2: THEY AIN’T MEAN ENOUGH, CAPTAIN, THEM IS CUB SCOUTS!

The Pirate and the Scout

The characters for this skit are one Cub Scout, a pirate captain, and several pirates (one whose name is Smythe)

Have a “plank” facing the audience.

Captain: You have been found guilty of doing good deeds, and I am sentencing you to walk the plank. Do you have anything to say for yourself?

One of the pirates starts to put a neckerchief onto the Scout like a blindfold.

Scout: Yes! Did you know that as a Scout I have learned to tie lots of different knots? Here, let me show you.

Scout takes the neckerchief and ties his own blindfold on.

Pirate 1: Gee, Cap’n, look at that neat knot. His blindfold is staying up all by itself!

Pirate 2: We never had a blindfold do that before.

Scout: And your deck is covered with splinters. In Scouts, we learn to work with wood and sand it real smooth. Why, with a little time and some sandpaper, I could show you how to sand and paint this deck and make it the pride of your ship.

Pirate 3: Then you wouldn't get splinters in your feet when you walk across the deck!

Captain: That would be nice.

Scout: And I couldn't help noticing how bored your crew is. We learn all kinds of games and songs in Scouts. You'd be surprised how much fun it would be to sing and play games.

Pirate 1: We could play games while we watched our enemy's ships sink into the sea!

Captain strokes his chin while looking like he's in serious thought.

Captain: Hmmm, there may be something to this Scouting. Smythe!

Smythe: Aye, Cap’n! I know, march him down the plank!

Captain: No, no, no…He's much too valuable. He's just chock full of great ideas and skills.

Pirate 2: Then we make him one of the crew? Force him to join?

Captain: Better than that, we'll join him! We'll become Scouts!

Scout: I can be your Denner!
Captain: Fine…but I'm STILL the Cap’n!

Have a leader read the story, pausing after each capitalized word. Tell the Scouts that when they hear the word assigned to them, they should stand up and say their phrase.

Back in the swashbuckling days of PIRATES bold, there lived a certain one named PEG LEG PETE. His only goal in life was to find a hidden TREASURE which could only be found by following a MAP.

PEG LEG PETE had such a MAP! He was very fearful of losing this MAP, and after carefully reading it, he hid it in an old wooden chest that he had found in the ground.

One fine day, PEG LEG PETE carefully dug up the chest containing his MAP and put it on his ship. Then he and his PIRATES set sail to find the TREASURE.

Each one was dreaming of the riches he would find when they finally located the TREASURE. Day by day, PEG LEG PETE followed what he remembered of the MAP.

Finally, they arrived at a deserted island, and the PIRATES were very happy that they were about to be rich. It was here that the MAP was needed.

Time to open that old smelly chest and see where on the island the TREASURE was buried. Upon opening the chest, PEG LEG PETE yelled and turned red with rage. The PIRATES all came running to see what the problem was.

It was then they saw that little termites had eaten all the MAP, and only dust remained! The PIRATES grew very angry over the loss of this information and tossed PEG LEG PETE to the sharks and proceeded to dig up the entire island looking for the TREASURE that the MAP would have shown them.

The last that anyone has seen of the PIRATES, they were still fussing and digging for “their” TREASURE.

Divide the Scouts into six groups, assigning each group one of the following:
Pirates: “Brave and daring!”
Bluebeard: “Walk the plank!”
Fort Royal: “Land Ho!”
Ship: “Jolly Roger”
Spanish Galleon: “Watch out!”
Sails or Sailing: “Oh.. my aching back!”

Like Peg Leg Pete's Predicament, read the story aloud. Have the Scouts stand up and give their phrase when they hear the word assigned to them.

Long, long ago before any of you were born, on a distant island called Tortuga, there lived a brave and daring group of people know as PIRATES. These PIRATES were noted for their ability as seamen and SAILING their SHIPS.

One day the PIRATES, led by BLUEBEARD, decided to set out on a perilous journey to find a new home in FORT ROYAL. The PIRATES loaded their SHIP with supplies and started SAILING toward FORT ROYAL.

For many days and nights, the SHIP rolled and pitched through the stormy waters. Great SPANISH GALLEONS sailed dangerously close to the PIRATE SHIP. Each time BLUEBEARD daringly steered his little band of PIRATES past the lumbering SPANISH GALLEONS. Working the SAILS fast and furiously, they managed to keep the PIRATE SHIP upright.

Finally, after weeks of SAILING through the stormy seas and post all those treacherous SPANISH GALLEONS, the daring PIRATES, led by BLUEBEARD, in their PIRATE SHIP sighted FORT ROYAL. With great joy, the PIRATES continued SAILING until they heaved to on the shores of FORT ROYAL.

If you would like a printable copy of these pirate skits, simply enter your email below!

What do you think about these seven pirate skits and stories? Which ones will you use for your pack?