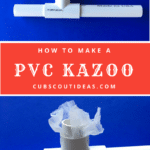 Making and playing your own DIY musical instrument can super fun for the kiddos. It's even one of the Cub Scout electives. Read on to learn how to make a kazoo from PVC pipe and a plastic shopping bag!

When I think of a kazoo, I think of the little plastic ones that are often found in birthday treat bags.  Even though kazoos have been around as long as I can remember, I had no idea they were invented so long ago.

Warren Herbert Frost patented the first recognizable kazoo in 1883.  Yep, over 100 years ago!  And did you know there is an actual Kazoo Museum in Beaufort, South Carolina?  Sound like a good stop if you're heading to Hilton Head for vacation.  🙂

My boys and I decided to make a kazoo out of PVC pipe and a piece of plastic from a shopping bag.  It was super easy and completed some adventure requirements.

Watch my son Parker put the kazoo together in just a couple of minutes.

I've used PVC in several projects, but I never owned my own PVC cutter.  I made the splurge and bought my own!  It's crazy that owning my own PVC cutter would make me so happy.  If you don't have your own, click on over to Home Depot and order yourself one.

Since I have a cutter now, I needed PVC pipe.  I could have purchased a smaller piece of pipe like these 2′ pieces, but I decided to buy myself a 10′ piece.  It barely fit in my car, but I have it for many projects to come. (Did you know that you can order things from Home Depot online and pick them up at your local store?  Very convenient!)

For the kazoo, you only need:

We used 1/2″ diameter pipe, but any size will work.  Just make sure that your pipe and your T-connector are the same diameter.

Wolf Elective Adventure – Air of the Wolf 2b:  Do the following:  Create a musical wind instrument, and play it as part of a den band.

P.S. If this project was useful to you, sign up below for more great Cub Scout information!

What is Google Analytics and How Can It Help Bloggers? - Easy Blog School

[…] have a post on my Cub Scout blog about making a kazoo out of PVC pipe, and PVC Workshop links to me. Digital Trends links to my rocket launcher […]

What is Google Analytics and How Can It Help Bloggers? | Painless Blog Analytics

[…] have a post on my Cub Scout blog about making a kazoo out of PVC pipe, and PVC Workshop links to me. Digital Trends links to my rocket launcher […]

For accuracy's sake, Warren Herbert Frost did not invent the Kazoo. The Kazoo was invented in Africa thousands of years ago. Study the history of the Mirliton which is what the modern Kazoo is directly derived from.

Wow! I didn't know that. Thanks for the clarification. :)