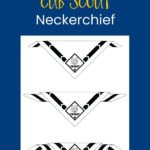 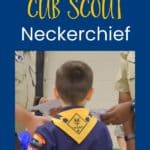 If you want to learn how to fold Cub Scout neckerchiefs, check out this post. You'll find out the easiest way ever to fold or roll it.

You may hear them called a Scout handkerchief or bandana, but since they're designed to be worn around the neck, they're commonly known as a neckerchief.

Should a Cub Scout Neckerchief Be Worn?

The Cub Scout neckerchief… to wear or not to wear? This large, triangle-shaped piece of vibrantly-colored cloth is technically a part of the official Cub Scout uniform, but it is considered by many to be an optional piece.

There are a lot of opinions out there on whether to wear them or not, when it’s appropriate to wear them, and even how to wear them. Some of the conflicting opinions come from different eras and experiences, and some are simply personal preference.

When a Scout puts on the uniform, he or she is immediately recognizable as belonging to one of the largest youth organizations in the United States.

The uniform also serves to remind the Scout of the expectations of the Scout Oath and Law, and the behavior while in uniform is usually held to a higher standard.

What is a Cub Scout Neckerchief?

No matter when or how you wear it, the neckerchief is the one piece of Scout gear that symbolizes Scouting around the world. The Cub Scout neckerchief helps to further identify the Scout by his or her rank.

Tigers wear orange, Wolves wear yellow or red – more on that in a bit – and Bears wear light blue. Each has a dark blue border with the corresponding rank emblem on the lower point of the triangle.

Webelos and Arrows of Light wear the gold, green and red neckerchief with the Webelos emblem. The Lions now have a neckerchief to go with their uniform too – gold with a blue border and Lion rank emblem.

A change in the Wolf uniform happened in 2018, moving to the red neckerchief and cap. This gives the Wolves a consistent color scheme between uniform, handbook and awards and allows the Lions to have the gold neckerchief to go with their Lion t-shirt and hat.

Both the gold and red are acceptable for the Wolf uniform, but your Pack should decide which color to use for everyone. If your Lions are wearing their gold neckerchief, then your Wolves would likely be wearing the red neckerchief and cap to avoid confusion.

Some Cub Scout packs expect the neckerchief to be worn anytime the uniform shirt is put on.

Other packs consider the neckerchief part of the “dress” uniform, and only to be worn for ceremonies and formal events.

And still there are packs, for financial or other reasons, that don’t require the neckerchief at all.

In 2015, the uniform policy was changed to allow the neckerchief to be worn with appropriate non-uniform clothing (commonly referred to as “Class B”) during Scouting activities.

This means that the neckerchief can be worn with a pack or camp t-shirt while at a campout or other outing where the uniform shirt is not required.

Check out any Scouting publication prior to the mid 1980’s, and you’ll see exactly what I’m talking about. But it is also acceptable to wear the neckerchief under the collar.

Under the collar is considered a tidier appearance, and the collar itself can help contain the neckerchief on those super-active Cubs.

The Guide to Awards and Insignia offers guidelines and acceptable practices, but doesn’t really dictate how, when and where the neckerchief is to be worn.

The important thing is to have a consistent rule for everyone to follow, which will present a unified group look.

What is your Pack’s preference when it comes to wearing the neckerchief?

The neckerchief is one of the most useful parts of the Scout uniform. It was originally considered to be adaptable to more than fifty emergency uses.

Some examples given in the 1925 Scout Handbook are to use the neckerchief as a signal flag, an emergency belt, sock or hat, a bandage, a smoke or gas mask, and staff lashing.

While the present-day (smaller) neckerchief isn’t quite as versatile, it still can be very useful as a flag or blindfold during a game, sun protection or cooling rag.

Even when out in a large public setting, it’s easy to spot those brightly-colored triangles and know that’s one of your Cub Scouts.

How To Fold Cub Scout Neckerchiefs

Now that you are properly versed in all things neckerchief, it’s time to put it on.

To properly wear the neckerchief, lay the triangle of material out flat with the “wrong” side facing up. Fold the long edge over approximately 1 ½” and continue to fold in flat folds until about 6” of the triangle remains, showing the Cub Scout rank emblem.

Want a printable copy of How to Fold a Cub Scout Neckerchief? Enter your email below!

Speaking of slides… besides the official rank neckerchief slide, there is a wide variety of ideas for hand-made slides out there. These can be made as a den gathering activity or to commemorate a special event, like the Pinewood Derby.

Here is a challenge for your Cub Scouts – how many uses for the neckerchief can they come up with?