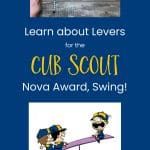 The Cub Scout Nova award, Swing!, is all about levers. Learn how levers work and about the 3 classes of levers. Get suggestions for building your lever.

Requirement 3 of the Cub Scout Nova award, Swing!, is when our Scouts will really start learning about levers and what they do. They'll explore the three types of levers, design their own item that uses a lever, and they'll discuss what they've learned with their counselor.

B. On your own, design, including a drawing, sketch, or model, ONE of the following:

C. Discuss your findings with your counselor.

You can find really good resources for levers at this unofficial BSA Stem Resources site. The poster elements document is especially helpful.

Levers are simple machines. They make it easier to lift or move objects that may be too difficult or heavy to maneuver on your own.

A lever has a beam that is attached to a pivot (called a fulcrum). Thist allows us to exert effort on the beam to move a load.

More than likely levers were used in prehistoric times; they’ve been around that long! Levers were first discussed around 260 BC by an ancient Greek mathematician. Archimedes.

Enchanted Learning has a great resource page about levers. It has animated graphics that show exactly how the three types of levers work.

How do Levers Work?

To help understand how levers work, here's a simple demonstration your Scout can do.

Using a ruler, a quarter, and a pencil, create a 1st class lever. Put the quarter on one end of the ruler, and place the pencil under the ruler close to the end without the coin.

Have your Scout push down on the end of the ruler without the coin. Move the pencil toward the center of the ruler then push down again. Your Scout will be surprised at what a difference it makes.

What are the Three Types of Levers?

The 1st class lever has the pivot or fulcrum between the effort and the load. This class of lever can also be off-centered which you’ll see in tools such as pliers, where the load is larger than the effort but is moved through a smaller distance. Examples of this type of lever include a teeter-totter, scissors, and a hammer’s claw.

The 2nd class lever has the load in between the pivot and the effort. A great example of this would be your everyday stapler used to staple together classwork. Other 2nd class levers you see around your house may include a wheelbarrow, a bottle opener, and nail clippers.

The best way to remember the three types of levels is using the Evil Elf Fell method. The “evil elf fell” saying helps you to remember:

To review the types of levers, use the BSA Stem Resources matching activity.

Why Do We Use Levers?

Levers help us move things by taking the load off of us. Each of the three types of levers makes it easier for us to get work done.

For example, if we try to remove a nail from a piece of wood just using our fingers, it will probably take us hours, if we can even do it at all. But the claw end of a hammer will quickly pull out that nail.

Another example is using a wheelbarrow. If we need to move mulch from our driveway to our flower beds, it will take us a long time without using a lever such as a wheelbarrow.

Levers are everywhere. A good way to reinforce this is to go on a “lever walk” around your house and identify all the levers you have. Here are some examples:

Most sports use levers too. Every sport that uses some type of stick is using a lever–baseball, golf, table tennis, hockey.

But did you know that sports like running that have no equipment are also using levers? That's right–our bodies have levers too! We're even using a lever in our body when we nod our heads.

How to Design Your Own Item That Uses a Lever

This requirement asks you to come up with something that uses a lever. It can be a new piece of playground equipment, a game or sport, or an invention.

Here are some ideas of things you can use to build your model.

Discuss with Your Counselor

To complete this requirement, the Cub Scout needs to discuss his or her findings with their counselor. If you're serving as your child's counselor, it's pretty easy to talk to them while they're working on this.

But if you aren't the counselor, your Scout will need to remember what they've learned. An easy way to do this is by taking pictures or video. Many of the devices that our kids use have cameras. Or they could simply borrow your phone.

Scouts can take pictures of the levers they see on your lever walk. They can also record a video of the ruler experiment. They'll also want to photograph or video their design.

You can email or text these images to your counselor right away, or use them when you meet with the counselor.

This wraps up requirement 3 of the Cub Scout Nova award, Swing! What was your Cub Scout's biggest takeaway from learning about levers?

Links to Other Swing! Requirements

P.S. Check out all the information to help your Cub Scout earn the Nova award, Swing!

[…] Cub Scout Nova award Swing! is all about levers. I wrote about an activity that uses a ruler, a quarter, and a pencil to create a 1st class lever. […]

[…] to stand in one place, they can look around the facility to identify the levers they see. Have them identify what class of lever they […]

[…] Requirement 3: Discuss what you found out about levers from exploring the types of levers and designing your own lever. […]