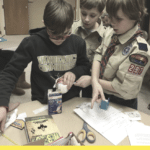 My son's Webelos leader, Jason (an Eagle Scout), is doing an awesome job with the boys.  Recently, he instituted a process that I wasn't too sure about, but it has proven to be a great idea!

I don't usually get to sit in the Webelos den meetings.  All of our pack's dens meet at the same place on the same day, so usually, I'm helping out other dens, talking to parents or taking care of other pack business.  Things slowed down a couple of months ago, so now I can attend.

At the end of the first meeting I attended, Jason told the boys to work with their den chief to decide what they wanted to do at the next meeting and to plan it out because they were going to run the meeting.

Now, I'm not admitting anything, but I have been accused of being a control freak.  🙂  You can just imagine the look of horror on my face when he said that.  Just exactly how are a bunch of fourth graders going to plan a Cub Scout den meeting?

I believe the boys were just as stunned as I was!  There was chaos because they just didn't know how to get started, so Jason coached the boys (and their den chief) a bit.  He also told them that they had resources available to them, including the adults in the room.  He encouraged them to use those resources.

The Webelos talked over each other and argued as they negotiated over the next meeting's adventure. From time to time, Jason would coach them, but he never tried to steer them to a particular adventure.

After the boys chose the Aware & Care adventure, they chose a leader who would run the meeting.  The Webelos talked through each requirement to determine how they would complete it, and Jason reminded them of things they needed to consider.  They discussed what supplies and equipment they would need and who was going to bring the items.

I'm sure Jason realized that I was struggling to keep from jumping in to “help” them!  He walked over to tell me why he had decided to make this change in our den.

He said that he had been thinking about the Boy Scout activities that he and his patrol mates weren't prepared for when they joined the troop.  Knowing how to work together to plan was the most important skill that Jason felt like he was lacking.  He said he wanted to make sure that our boys had some practice before they crossed over to a Boy Scout troop.

Fast forward a couple of weeks.  One of our Webelos was leading a meeting, and several of the other boys (mine included!) were talking instead of paying attention.  I got Grant's attention to tell him to be quiet.  Jason stopped me and said, “I got this,”  but he didn't say anything to the Cub Scouts.  I wanted to ask Jason what he planned to do since the boys were still talking, but I decided to trust him.

At the end of the meeting, he asked the boys if they were paying attention and being respectful to their friend.  They admitted that they weren't.  Jason then asked the presenter how that made him feel, and the boy said not so good.  He reminded them that they would all have a turn at being the leader, so if they wanted their fellow den members to pay attention to them, they should pay attention when someone else is talking.

I would have never thought about managing our den this way, but I'm glad Jason is!  Our Webelos are learning some lessons that will serve them well as they cross over into a Boy Scout troop next year.

What about your pack?  Have your Webelos dens tried this or something similar?  I would love to hear about it!

P.S.  If you liked this Cub Scout idea, sign up below for more helpful hints!

Was there any sort of prep done with the boys before turning it over? I have 4th grade Webelos. I'd like to give more ownership to them but wondering what the transition was like. Any other guidance you can share?

This is a great idea... One of my boys just transitioned into Boy Scouts this past February and watching EDGE work is great. Exposing the Webelos to this early is a great idea, especially when they have young men leading them. Brilliant...

Thanks!! I'll pass your compliment along to our den leader!

We have not in the past but with the new format I can see the boys doing this. The new program is laid out so much nicer for people to jump in and help in the lower ranks that the boys, with a den chief, could do this as webelos. I know that our scout troop ran with doing the arrow of Light camping requirements and the Webelos cooking and hiking achievements with the den with no help from adults with the exception of getting the boys there. So why not the Webelos? I am passing this on to the den leaders.