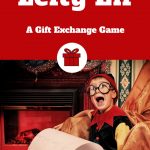 Christmas gift exchange games can make your party super fun! Lefty Elf will have everyone laughing as they try to keep up.

Christmas gift exchanges really are fun. The Lefty Elf story is the perfect game for Cub Scouts. It's active which is a great thing after a long day at school.

Here's how it works. The Scouts will all sit or stand in a circle, holding the gift they brought. Tell them that you're going to read a story.

Yes, it is until they realize how many times you're going to say left or right during the story! It's hilarious watching the Scouts try to pass the gift.

Some of them will be holding two or three gifts at a once. Hopefully, their neighbors can help them out.  🙂

I've used this activity for my son's holiday party at school. I played it at a geocaching party too. It's great for a family gathering.

In fact, you could use the Lefty Elf story for just about any situation where you're trading small gifts.

Speaking of small gifts, here are a few suggestions from my son. I told him they needed to be inexpensive. (The story is below these ideas.)

Grant is fascinated by these pin art things. I remember when I first saw them years ago. It was so weird to put your face into a frame with “pins” sticking out of it. But the end result was pretty cool.

Who doesn't need stretchy flying ninjas?!? There are 12 individually wrapped ninjas in each pack.

I would probably split the pack up–maybe use half of them as a stocking stuffer for my son and wrap up the other six for the Christmas gift exchange game. The price on these is great!

Grant LOVES squishy cats! Don't tell him, but I'm ordering them for his stocking.

There are a ton of different types of squishies, including poop emoji squishies. GROSS!

I love playing with a Slinky, but don't you hate it when someone gets it all tangled up?

Slinkys have been around since the early 1940s, and they're even in the National Toy Hall of Fame.

If your Scout hasn't read Hatchet by Gary Paulsen, go buy it right now! It is a great book!

My friend Betsy read it to her Cub Scout sons. Everyone in my house has read it too. My older son Parker even created a diorama about the book for a school assignment.

You can also find some good Christmas gift exchange ideas on my list of Cub Scout stocking stuffers under $10.

The story is below, but I've also created a document that you can download.  Scroll on down and enter your email address to download it.

This is a story about Santa and LEFTy Elf.

LEFTy received his nickname one Christmas when he couldn't seem to do anything RIGHT. Santa said, “LEFTy, sometimes I think you have two LEFT thumbs!”

On the day before Christmas Eve, Santa and LEFTy were finishing up the toys that were LEFT. LEFTy called from the workshop, “Oh no, there is no glue LEFT! Santa, do you know where any might be?”

“I can't believe you forgot to check the inventory. Sometimes I wonder if you can get anything RIGHT, LEFTy!” said Santa.

“Santa, don't be mad,” replied LEFTy. “It will only take me a few minutes to find some. I'll be RIGHT back.”

Santa said, “I'm sorry I am so grumpy, but we don't have much time LEFT, LEFTy.”

“I'll try our packaging and delivery outlet RIGHT on the edge of town,” said LEFTy.

Santa replied, “It would be faster to stop by my house. Mrs. Claus is sure to have some LEFT, but she just might not know RIGHT where it is.”

“Take the short cut, go to Candy Cane Lane and Rudolph Rd. and turn LEFT, RIGHT at the Lollipop stop sign. Then go to Holly Drive and turn RIGHT, and there it will be on your LEFT.”

LEFTy found the house RIGHT away and asked Mrs. Claus where she might have some glue LEFT. Mrs. Claus' hands were all doughy from making the last of her Christmas cookies. So she directed him RIGHT to her craft room.

“Go RIGHT down the hall and turn RIGHT, then open the first door on the LEFT. Walk RIGHT in and turn RIGHT. It should be on the bottom shelf, RIGHT next to the LEFT-over glitter.”

LEFTy found plenty of glue to finish the toys RIGHT where Mrs. Claus had directed him. LEFTy hurried RIGHT out the door. LEFTy looked LEFT, then RIGHT, then LEFT, but he couldn't remember where he had LEFT his sled.

Suddenly, he remembered he had taken Santa's sleigh because it would be faster, and that his sled was in the garage at the workshop RIGHT where he had LEFT it.

Eventually, a tired LEFTy found his way back to Santa's workshop.

Santa said, “LEFTy, I thought you said you would be RIGHT back, so I LEFT Jolly Elf to take over your station. He used all that was LEFT of the red paint instead of gold, so now there is no red paint LEFT to touch up my sleigh. You will have to go RIGHT out and get some, LEFTy!”

LEFTy sighed and happily said, “I knew we would have no energy LEFT by now, so RIGHT after Thanksgiving, I fixed up your sleigh for the big day!”

Santa said, “I'm so sorry I said you couldn't do anything RIGHT! Because of you, there is no work LEFT, and I can go RIGHT to bed. I'll be all rested and my jolly old self again. Good night, LEFTy.” And Santa went RIGHT to bed.

Now I hope you have the RIGHT present for yourself, because that's all that's LEFT of our story. Except to wish you a Merry Christmas…Isn't that RIGHT?

P. S.  For more holiday ideas, check out these posts.

What a super cute and fun story!

This sounds like so much fun. I think we'll try this at next year's party.

I wish I saw this few weeks back so I can use this idea. Great story!