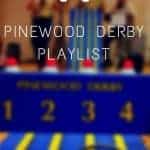 Create a festive environment at your next Pinewood Derby by playing some of these great car-related songs! Download them to your phone or tablet to create a Pinewood Derby music playlist, and hook it up to a mini speaker. Parents and kids alike will love the music.

Last year, my pack decided to change up our Pinewood Derby a bit. One of the things we did was play music during our weigh-in time. It created a more festive atmosphere and added to the excitement of the race!

I searched for car-related music, and I found some fun songs! I created a Pinewood Derby playlist on my phone and connected the phone to our pack's portable PA system. You could also use a portable Bluetooth speaker.

So, here's our fun Pinewood Derby playlist! I'm including links to iTunes for my fellow i-users as well as to Amazon for our Android device users.

1.  Life is a Highway by Rascal Flatts – How many of your boys have had a Cars car in the Pinewood Derby? Mine have!

2.  Mustang Sally by Wilson Pickett – This song was recorded at Fame Studios in Muscle Shoals, Alabama just a few miles from my hometown. There was some incredible music recorded in Muscle Shoals. Check out the documentary on iTunes or Amazon Video.

3.  Fun, Fun, Fun by The Beach Boys – Let's hope none of our boys get their T-Birds taken away!

5.  Born to Be Wild by Steppenwolf – Gotta get your motor runnin'!

6.  On the Road Again by Willie Nelson – This song won a Grammy for Best Country Song.

9.  Rocket 88 by Jackie Brenston and his Delta Cats – Although I had never heard this old R&B song, it has become one of my favorite “feel good” songs.  You can read about how a damaged amplifier created a trendy new sound.

Since I first created this playlist, some of you have commented with great suggestions! Here they are!

11. I Get Around by the Beach Boys – Another fun suggestion from Amy.

12. This Car of Mine by the Beach Boys – I love all of Amy's suggestions, don't you?

14. Little Deuce Coupe by the Beach Boys – I can't believe I forgot this classic. Thanks, Maribel!

15. Car Wash by Rose Royce – OK, I'm telling my age now. This song came out when I was in 6th grade, and it was a staple during my junior high days! 🙂

16. Cars by Gary Neuman – Another junior high favorite that I had forgotten.

Cars for iOS
Cars for Android

17. Beep Beep by the Playmates – This was a new song for me. Thanks, Maribel!

Note: As I was collecting the links for these songs, I realized that many of them are included in Prime Music, a benefit of your Amazon Prime membership. Here's how Amazon describes it:

As a Prime member, you can stream over 2 million songs ad-free, listen on any device including Amazon Echo, and take your music anywhere with offline listening.

If you don't have Prime already, take advantage of the 30-day free trial. Sign up today and enjoy Prime Music for your Pinewood Derby!

Which songs would you add?  Leave a comment to let me know. Then click on over and download these fun songs for your Pinewood Derby music playlist!

P.S. If this was helpful, check out all of our Pinewood Derby information!

I would not put the Beatles song on here. It’s sexual innuendo all the way. It’s on plastic soul album . Okay so maybe these guys were before your time, you gotta know a grandma or two or google the lyrics. The kids may not notice, but someone else will!!!

[…] some cool tunes from this Pinewood Derby music playlist. Have the Scouts (and their younger siblings) make Raisin […]

Great list to play at a Pinewood Derby BUT...

If you plan to use them in a live stream or upload a video you may have your content blocked due to copyright violations.

[…] Nothing gets a party started like music! Check out these car-related songs on my Pinewood Derby music playlist. […]