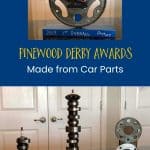 A few years ago, I met Brian Bauman through our neighborhood Facebook group. He and his family had moved into our subdivision.

Turns out he is a Cubmaster for the pack that was close to their previous home. I tried to recruit him to come to our pack, but they decided to stay. It was definitely our loss!

Brian posted in our Facebook group asking if anyone had old car parts. He said he was going to use them for Pinewood Derby awards. That got my attention! I asked if I could share them in this blog post, and Brian graciously agreed.

When he was almost finished with them, Brian messaged me to let me know so that I could drop by to see them. When I walked in and looked at them, I was blown away!!

Why Make These Awards?

Brian told me that when he became Cubmaster, he found out that the pack had spent $120 on prizes for their Pinewood Derby, and that only paid for a first place trophy, a second place medal, and a third place ribbon.

He was shocked by that amount. As he told me, “The Scout Law says a Scout is thrifty.” It was then that he decided he could make the pack's awards for a lot less money.

For his second and third year as Cubmaster, Brian made trophies that consisted of 2×4 pieces of wood with Hot Wheels cars placed on top.

How Did Brian Come Up With the Idea?

Brian is always trying to think of new and different ways to do things with his pack. That was also part of the reason he made the trophies with Hot Wheels.

After two years of making trophies with that design, he wanted to come up with something different for their Pinewood Derby awards, and while he was picking his car up from an auto shop, he saw some junk parts in a trash bin, and the idea came to him. He could make one-of-a-kind trophies that Scouts would want to keep for s while being thrifty with the pack budget.

Where Did Brian Get the Parts?

In addition to asking his neighbors for parts, Brian called car dealerships and salvage yards. One of the car dealerships gave him some parts that had been recalled. Typically, they would have thrown those parts away. What a great way to reuse something that was worthless!

One October afternoon, Brian headed out to the local salvage yard with his wheelbarrow. He made sure he wore heavy boots so that if he stepped on something metal, he wouldn't have to worry about it puncturing the bottom of his foot.

As he walked up and down the rows of broken down cars, Brian was on the lookout for any parts that seemed interesting. I'm amazed at his creative ability to look at broken down cars and see the potential for Pinewood Derby awards in their pieces and parts.

How Did Brian Design the Pinewood Derby Awards?

When Brian got home, he had flywheels, pistons, gauges, spark plugs, , and other parts. So, he organized them on his driveway, putting similar items and sizes together. And of course, his neighbors wanted to know if he was opening a salvage yard! ?

This allowed him to visualize what he wanted to use for the various awards. He also wanted to ensure that all of the first place den awards looked similar, etc.

Brian used the one of a kind parts for the pack overall 1st, 2nd, and 3rd place awards as well as the Best Gas Mileage and three Best Decorated (Scout Favorite, Sibling Favorite, and Parents Favorite) awards, for a total of 25 awards.

How Did Brian Clean the Parts?

When you get car parts from the salvage yard, they're dirty, greasy, and sometimes rusty. Brian's next job was cleaning them. He used vinegar to soak the rusty parts for 12-24 hours. Then with the use of a simple toothbrush, he scraped off the loose rust. For the parts that were greasy, he sprayed brake cleaner on them and wiped them off with paper towels.

The cam shafts cleaned up pretty well, but they had a lot of grease in the middle of them, and it's impossible to get all of the grease out. After he had done the best he could, Brian knew there was still a possibility that one of his Cub Scouts might stick a finger down into the cam shaft and come out with a glob of grease.

He realized that a spark plug fit perfectly into the opening of the cam shaft. This would keep those little Cub Scout fingers out of the grease. Plus those spark plugs made a cool topper to the award. Brian glued them in and solved that problem.

Even after multiple cleaning sessions, there were still a few parts that just wouldn't come clean well enough to give to a Cub Scout. So he got creative again and came up with another solution. He sprayed all the parts with clear coat enamel, which gave them a nice polished look, while sealing in any remaining dirt or grease.

How Did Brian Build The Award Bases?

Simple 2x4s were used for the bases. Brian teamed up with Geoff Collins (the Bear den leader in his pack) one January Saturday afternoon, where they measured, cut and sanded the bases with power tools. They had to take into account the car parts that would be used on each item, in order to make the bases wide enough to keep them from falling over.

How Did Brian Attach the Parts to the Wood?

All the car parts were attached to the bases using super glue, and some used small screws.

How Much Did These Awards Cost?

$62 was the total cost of the Pinewood Derby awards. This included the wood, super glue, vinegar, and brake cleaner, as well as some primer and spray paint. He had some left-over spray paint from last year, so he didn't have to buy all new paint this year.

Brian didn't spend a lot of money on these awards, but he put his heart into them and spent his time over a few months making them.

He estimates he spent about 25 hours total, collecting parts, cleaning and building, and painting and labeling them.

Anyone who's ever been a leader knows that when one person volunteers for Cub Scouting, the whole family helps out. A big thank you goes out to Brian's wife Shanna and their kids Aiden, Stella, and Owen for their part in helping to make these incredible awards.

What Did the Cub Scouts Think?

Not only did the scouts love these Pinewood Derby awards, but the parents were amazed as well. They said these were the coolest trophies they have ever seen and will be ones that their scouts will keep forever.

Brian, thanks so much for sharing the story of your trophies with us!

If you would like to see all of the pictures that Brian shared, check them out on my Facebook page!

[…] for DIY Pinewood Derby awards? You have to check out these that were made from old car […]