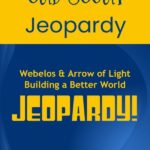 Looking for a way to make the Arrow of Light adventure, Building a Better World, more fun? Look no further than these Jeopardy-type games!

But before they can contribute to their communities and our country, our Scouts need to learn more about how our form of government works.

Building a Better World asks the Scouts to “learn” about the rights and duties of citizens and to “discuss” the concept of rule of law. That sounds a bit like school, doesn't it?

Instead of a boring lecture or a discussion with only blank stares, turn these into a fun activity and competition.

What is a Good Citizen?

Start by asking the Scouts to describe the actions of someone who is a good citizen. Then ask them to name something they've done that make them good citizens.

Here are some of the answers you might hear.

What are Rights and Responsibilities of Citizens?

Before you begin these activities, take a few minutes and ask the Scouts what they think rights and responsibilities are.

The Good Citizen Scout activity would be a great way to do this activity.

Create a Scouts' Bill of Rights

Tell your Scouts that they're going to create a Cub Scouts Bill of Rights where they can share what they think their rights are as Cub Scouts.

They must think up one responsibility that goes along with each right.

The point of this is to help your Scouts understand that rights have responsibilities too.

This activity can be done as a den, but if you have more than 10 Scouts in your den, you might want to divide them up into small groups.

Ask the Scouts to name some rights that they think they have as Cub Scouts. After they name one, ask them to name a responsibility that goes with that right.

Record their answers onto a white board or a flip chart. I love these flip charts because they have their own “easel” built in.

Here are some examples.

Most of us know about the popular TV game show, Jeopardy, where you're asked trivia questions and your answer has to be in the form of a question.

I thought it would be fun to create a Building a Better World Jeopardy game.

There are three versions of the game.

The Scouts in my son's den played it recently, and they had a blast.

Instead of individuals playing, we divided them up into teams.

Before the meeting, I emailed the parents asking them to have their Scouts read pages 117-120 in their handbooks. Most of the questions were from those pages.

I did include some questions specific to the Scouts' schools, but you can easily change them in all three versions.

The first game is played online, so you will need an internet connection.

The pro about this version is that you can set the number of teams that will be playing. By clicking on the green plus sign or red minus sign below the team numbers, this game will keep score for you.

The Google Slides version of the game can be played either online or offline.

To edit it, please make a copy by clicking on File then Make a Copy.

The last version is played offline. Simply download the file, and open it in PowerPoint on your computer. After you open a question and the team has answered, click on the screen to see the correct answer.

There is no scorekeeper in this game, but you do have a Final Jeopardy question.

Do you think your Arrows of Light will enjoy this way of learning the material in Building a Better World?

[…] P.S. This Jeopardy game is perfect for the Building a Better World adventure. […]

Thank you for sharing this! I used it last night and the kids had a great time (Wow some of them were competitive!). Our winning team bet a dollar at the end, in true jeopardy fashion. Really appreciate this.

I have used the online game in the past and it was great. I wanted to use it today but the questions and answers are all blank? I hope it can be fixed because it was a lot of fun for the boys. I will have to use the powerpoint version but would have loved to use the online version it was awesome.

how do I change the questions about your school to our own questions? thks!

Thank you so much for this excellent game!!!! I used it last night with my 9 Webelos and it was a lot of fun. Just a suggestions for anyone else wanting to use this - It might go faster if you just go down each column instead of letting the kids pick the category. We used play money and the kids really enjoyed it! Sincerely, thanks a ton to the creator of this game!!!!

Using play money is a great idea! Thanks!