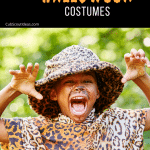 Halloween costumes are the hot topic of conversation between parents and kids during September and October!

Some years, pop culture gives them fun choices. A few years ago, the summer release of the Star Wars movie inspired a lot of Kylo Ren. Kids dressed up in Pokemon Halloween costumes because of the Pokemon Go game.

But if your Scout wants to be something other than a popular culture character, they can turn to their Cub Scouting experience. Read on to discover some Cub Scout-inspired Halloween costumes.

For Halloween, your kid can be a Smores, the favorite campfire dessert of Cub Scouts around the world.  🙂

If you are a DIYer, here's an easy costume you can make from cardboard boxes. This version uses double-sided carpet tape and felt, but I would use a hot glue gun and either spray paint the marshmallow and chocolate bar or wrap them in white and dark brown paper.

Another option is to purchase your s'mores costume. Check out this adorable one!

If you've ever been to a Cub Scout day camp, you know that Cub Scouts LOVE archery and BB gun shooting! So your Scout may want to be an archer this Halloween.

This costume from Amazon features a hoodie with an attached vest, a belt with a pouch, gauntlets, and boot covers. You'll need to purchase the bow and arrows separately.

This set is a best seller, but based on the reviews, I would only buy it as a prop for the costume and not as a set your child can use.

If you want to make your Cub Scout's costume, here's a simple no-sew Robin Hood costume. Leave off the hat, and they can be an archer.

Check out this post for instructions on how to make a super cheap bow and arrows set.

We want to keep the “outing” in Scouting, and I can't think of anything that says “outdoors” more than a lumberjack! 😉

Amazon has this cute costume available.  You'll want to add a bushy beard and the axe which are sold separately.

This is a costume that I would probably make instead of buying. Check out this tutorial! I would definitely go with the no-sew version.

Another great outdoorsy costume is a fisherman.  This costume has everything except the fishing pole and shoes.

Grab this REAL fishing pole that your Cub Scout can take the next time the pack camps close to a fishing spot.

I love seeing the pictures of our little Cub Scouts with the first fish that they catch! Sometimes, the fish is almost as big as they are. 🙂

Some very creative folks came up with easy make at home fisherman Halloween costumes.  Here are a few that I love.

Fisherman in His Boat

Cub Scouts and popcorn! This is a fun costume from Amazon. I'm not quite sold on the popcorn “hat.” In fact, reviewers said there really wasn't a way to attach it to kids' heads. Do y'all think it would be just as cute without the headpiece?

One of the reviewers said she bought it for the kids in their pack to wear when selling popcorn in front of local stores. She said they took turns wearing it and loved it!  What a great idea!!

Do-it-yourself popcorn costumes are really cute too. Many of the ones I saw online use this insulating foam sealant to make the kernels. This blog post has pictures to show you how.

I love the costume in it too, but it's a bit beyond my crafting abilities! A cardboard box and red and white duct tape is more my speed. 🙂

I would use the popcorn kernels made from the foam with the cardboard box version shown here.

Why not be a Pinewood Derby Car for Halloween? You can make a cardboard box car similar to ones the Cub Scouts use for the Cubanapolis race.

If you haven't heard of the Cubanapolis, check out the information available from Akela's Council.  Pack 243 from Sachse, Texas published a nice graphic showing how to build the car. Kids can then decorate any way they want!

Does your Cub Scout want to be their rank–a Lion, a Tiger, a Wolf, or a Bear? One of the easiest ways to do this is with face paint.

Here are instructions on how to do each:

If your Cub Scout wants more than just a painted face, here are some simple homemade costumes for the ranks. By the way, does anyone know how to make a Webelos costume?? 🙂

Lion: You only need yarn for this simple Lion costume!

Tiger:  Use duct tape or felt for your own DIY tiger costume. I did this a few years ago for my son with orange felt.

I hot-glued it onto the black sweatsuit. I wish I had thought about using orange duct tape instead!  🙂

Wolf:  Start with a grey hoodie to make this simple Wolf costume. Felt and a glue gun makes this my kind of costume!

Bear:  Here is an easy bear costume to make.

If you're super busy (and who isn't these days??), purchasing a costume is the ultimate time saver. Check out these fun, ready-made costumes available from Costumes 4 Less.

I hope these 9 epic Cub Scout inspired Halloween costumes have given your child some ideas for their costume this year. Leave a comment, and let me know what they chose!

P.S.  Need a Halloween skit or song for your October pack meeting? Click over for some ideas!

When the kids were growing up, I had to make do with what we had for costumes. One year my son dressed as a policeman and was handcuffed to his sister, whose was a "Cat Burgler". My son wore black dress pants, a long sleeve pale blue button shirt, an old Police cap, a badge. and carried a nightstick. Then he was handcuffed to his sister with real handcuffs, (we kept the key), and she was dressed in black leggings, black turtleneck with a hood, and whiskers on her face and cat's ears. The local reporter was amazed at what we did with little or no cost and took their picture for the local paper. My daughter's facial expression was priceless. She was mad cause she was cuffed to her brother, so she looked like she was mad at being caught for her "crime".

One year, my son was a "were-scout". He wore his regular uniform shirt. I took about a yard of brown, long haired fur and made him some wolf hands (fur hot glued to the backs of gloves). Then made a tail that we safety pinned to the back of some old jeans. We took advantage of the old holes in the jeans and hot glued fur (from the inside) so it stuck out. Then added a "hem" of fur to stick out over his shoes. He already had a wolf mask (the whole reason I had to come up with this. lol) and voila, one "were-scout".