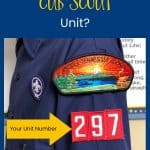 What is a Scout unit? Learn about that plus the way the Boy Scouts of America is organized from the National Council down to your local group.

Scouting, like most activities, has its own jargon.  Until you learn the “talk,” you're probably going to feel overwhelmed.

As a new Cub Scout parent, the thing that confused me the most at first was when I was asked for my Scout unit number. I would call our local council to ask a question, and the first thing they asked was, “What is your unit number?”

I knew we were members of den 7 and that our den was part of Cub Scout pack 297, but I had no clue what they were asking me when they wanted to know our unit number. As a den leader, that was pretty confusing for me.

What is a Scout Unit?

A unit is simply a generic term used in Scouting to describe an organized group of Scouts. Below is a list of the units in Scouting.

For Cub Scouts, a pack is the unit. A Scouts BSA troop is the unit for the older kids. For Venturing, it’s a crew. A ship is the Sea Scouts unit.

Your den (and the other dens in your area) will be part of a pack and will have a pack number. That pack number is your Scout unit number.

At first, I had to look at my son's uniform shirt to remember what our pack number was!  The pack number is worn on the left sleeve below the council patch.  In this picture, the unit number would be 297.

So, when I call my council office, they’ll ask for my unit number rather than my pack number because I may not have told them I’m calling about Cub Scouts.

This makes it so much easier than asking for your “pack, troop or crew number”.  Just remember, all they want is your pack number!

As a side note, the unit leaders are called different names too. The Cub Scout pack has a Cubmaster. The Scouts BSA troop has a Scoutmaster. A Venturing crew has a Crew Advisor. A Sea Scout ship has a skipper. These adult volunteers help run the different units.

Read on to learn more about how the Boy Scouts of America is organized.

How is Scouting Organized?

Units are just the first tier in the Boy Scouts of America's organizational structure. All units in a set geographical area are part of a district.

Scouting districts all belong to a council. BSA has approximately 270 councils.

Councils that are geographically close are organized into areas. The number of councils per area varies.

Areas are grouped into one of four regions across the country. Those regions are all part of the National Council which is headquartered in Texas.

I'll use my pack as an example. We're in Pack 297 which is part of the Natchez Trace district.

We're part of the Middle Tennessee Council which is one of ten councils in the Southern Region's Area VI. There are a total of nine areas in our region.

If you're new to Scouting, that's all a bit overwhelming, I know. But hopefully, it helps you understand how the Boy Scouts of America is organized.